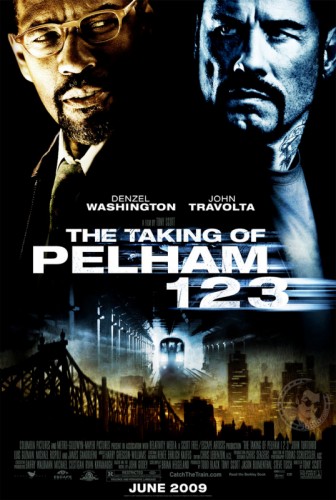 This New York Times article discusses the transit realism of the Taking of the Pelham 123 remake (a movie about a hijacking of a NYC subway car):

Accomplishing this feat of relative realism in a place so inhospitable to most human endeavor, much less moviemaking, was possible largely because New York City transit officials — who must balance train schedules with shooting schedules — decided to pull out most of the stops for the production and granted unusual access to busy platforms like that of the Flushing line at Grand Central Terminal, where the first hijacking scene takes place.

“We thought, ‘This is our movie — it’s about New York City Transit — and we really wanted it look great,’ ” said Alberteen Anderson, director of film and special events for M.T.A. New York City Transit, whose office has helped arrange several complex subway shoots, often to see the movies made from them, like “Money Train” and “The Cowboy Way,” end up as clunkers.

If you’re a fan of the NYC subway, I suggest reading the whole thing. From the previews I’ve seen for the new Pelham, it has me worried that it’s going to lose most of the humor that made the original such an enjoyable film. I guess I’ll have to watch and see.

So I’ve been thinking, what are the best transit movies? I loved the original Pelham. The French Connection had a few great subway moments, including Gene Hackman as Popeye Doyle car chasing an elevated B train in a wild – and illegal – scene. One of the best movies of any sort. Speed was a transit movie, but I can’t say I liked it. Any thoughts? What’s your favor transit, train or bus movie?

This will be my last post here for a long time. I’m retiring from STB to free up time to spend on my other endeavors. I started the blog two years ago with no idea what would come next. I’m really proud of the what the blog has become, and it’s been a real joy to write for such a smart audience and read such thoughtful discussions. I am sure the discussions will continue unabated and I look forward to reading more great posts from the other contributors here and more lively, informative discussions in the comment threads.