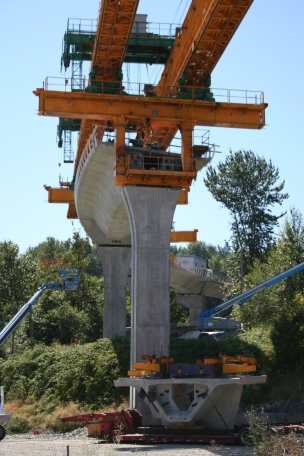 The Stranger recently wrote about seven things they learned when they rode light rail for the first time. The last one caught my eye – we need to speed this up.

There’s a big shrug from Sound Transit about accelerating University Link or Northgate – we can’t do much without immediate infusions of hundreds of millions of dollars, and I keep hearing they’re already working on a Northgate acceleration plan. But we can definitely do something about ST2’s other components. We could speed up Lynnwood, Federal Way, or Redmond extensions with more cash in the next few years, and we could accelerate planning for a new line in the city. This is why we’re starting to try to talk about new funding sources.

At the national level, there’s not much. There’s pressure on the Federal Transit Administration to improve their New Starts grant process, but we’re all here in Seattle, where it’s tough to have an impact in DC. It makes more sense to me to fight for new funding at the local level – we’re going to have to go to the state, and that’s a tough task on its own.

The options that stuck out for me are the basics:

Were there other obvious funding sources I missed? I know there are lots of other options, but these seem like they’d be the easiest. Sound Transit already collects some MVET for Sound Move, but they won’t be able to continue using that revenue after the bonds are repaid, probably around 2023. Would that be a good place to start? How about allowing local voters to double it?

146 Replies to ““We need to do everything possible to get new stations built quickly.””