Transportation Choices Coalition (TCC) has a good analysis of all three of the proposed transportation budgets on their blog and copied below. Since the release of the House’s budget earlier this week $4 million dollars in funds for Sound Transit’s Lakewood to Tacoma Sounder vehicle project have been added back (out of $4.5 million dollars). This project was not initially included in the Regional Mobility Grant despite being one the top ranking projects. This amendment was proposed by Rep. Upthegrove and approved by Transportation Committee Chair Rep. Clibborn, is noteworthy and promising. The proposed budget also funds $5.2 of the $8 million dollars requested by ST for the S. 200th Link extension.

Here is a chart depicting the major differences between the three proposed budget (numbers are in millions unless otherwise noted) is below. 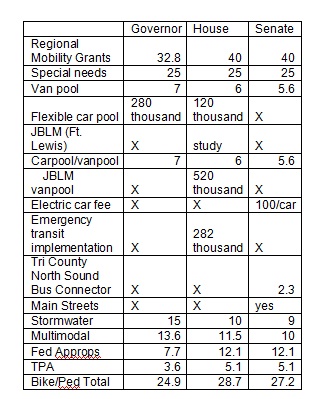 The following comments will in included in TCC’s testimony on the Senate Budget, which will be heard at 3:30 this afternoon.

We are very pleased to see that the Senate proposed budgets include $40 million for the Regional Mobility Grant program which is a crucial grant program funding transit agency capital and operating needs.  This is restoring $20 million in cuts that the Governor proposed, and gets the program back to previous funding levels.  Also, your proposed budget includes $17 million for rural mobility grants and $25 million for special needs transportation provided by transit agencies and non profits.
This money will allow critical capital programs and service needs to be met, until we find a long term solution for sustainable transit funding, but will not stop drastic service cuts facing the entire State.

Still the need for transit money is much greater that these grant programs can cover. There are 13 projects on the Regional Mobility Grant contingency list that will not be funded, projects that will help mobility once the viaduct is torn down, improve service at the Hanford site, and restore Sunday service for Snohomish County will not receive funding at this current level (this project was included in the House budget).

Also, the House budget included money for Department of Licensing to implement a congestion reduction fee for short term transit funding; we hope the Senate will agree to do the same.

The Senate proposes $10.5 for safe routes to school and bicycle and pedestrian safety projects.  This level leaves off two projects that are included in the House proposed budget.  We ask this committee to consider including more projects on this list.    To put this in funding in perspective, WSDOT received 124 Safe Route to School applications with total requests of $43 million.  Pedestrian and Bicycle Safety Program applications are by invitation only- but there are at least $5million in contingency projects that have applied. There is high demand for more resources for non-motorized modes of transportation.  Even though bicycling and walking make up 6% of all trips statewide, those modes get only 0.3% of state transportation funds.

Thank you for funding these projects, and please consider dedicating more money to support safe, affordable and healthy neighborhoods through direct funding for complete streets, transit oriented communities and direct funds for non-motorized infrastructure when it becomes available.

Washington’s waterways are central to our way of life here in the Pacific Northwest. From Puget Sound to the Spokane River, they play a big role in our economy, our food system, and our quality of life.  We are concerned that the level of funding in your proposed budget may lead to non-compliance on our State’s storm water permits.  Please ensure that funding is adequate to meet federal and state requirments.

The House proposed budget includes directive to WSDOT to collaborate with affected MPO’s, RTPOs, planning orgs, and transit agencies to develop a plan to reduce vehicle demand, increase public transportation options, reduce VMT on corridors affected by growth at Joint Base Lewis-McChord.  We hope the Senate will consider including this directive in your budget.

Also, the House budget includes $120,000 for a grant for flexible carpooling pilot administered by the department.  This is on top of $208,000 for flexible carpooling for 520.
We must acknowledge our gratitude that WA state realizes the wide benefits of rail for freight and passengers.  We are very pleased that the State will utilize the $782 million from the federal government on WA projects and matching operating dollars to run increased Amtrak Cascade trips between Seattle and Portland.