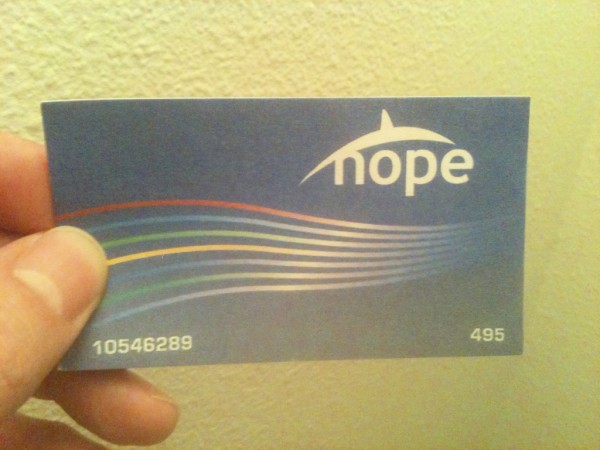 The We Won’t Pay people—the group that is urging people not to pay their fares when they ride Metro—have created a clever version of the Orca cards with the word “Nope” written on them. These were being distributed at the Occupy Westlake gathering over the last weekend. While some people might disagree, I have no problem with free transit anymore than I’d have a problem with free coffee or free pony rides. The problem with “free” is that it is an elusive concept. If we really want to reduce the price of transit, at the fare box or anywhere else, big changes are needed in the way we do land use and plan for growth. These solutions involve using the market to our advantage, something I doubt the We Won’t Pay movement has reached consensus on.

I’ve pointed out before that if we consider simple supply and demand, the problem with transit pricing is that the demand is diffuse which drives up costs to supply that demand. It’s the same reason that pizza delivery restaurants often have a service delivery area. I might want a pizza from that cool pizza place in Seward Park, but for them to drive it to me in Capitol Hill is cost prohibitive to them. The same is true of transit, when demand is spread all over the county then it’s going to get more and more expensive to operate the system.

But unlike a private pizza business, the community and political system has decided we do need to support the transit system even with all the costs. As part of the social contract we invest in things that we may not use or that wouldn’t make a profit. That’s why we use tax dollars to keep transit going. More after the jump.

It’s also the thing that causes pique for the The We Won’t Pay folks. They don’t like that we pay for transit more than once, and the fare box is the last straw. From their manifesto on back of their fake Orca card:

1st time: Everything we do at work creates the wealth that allows the local transit system to operate. Our bosses take most as profit.

2nd time: ALL of us pay state sales taxes and/or federal taxes that go toward local transit.

3rd time: Those of us with cars will pay a $20 car tab every year for Metro, maybe more. 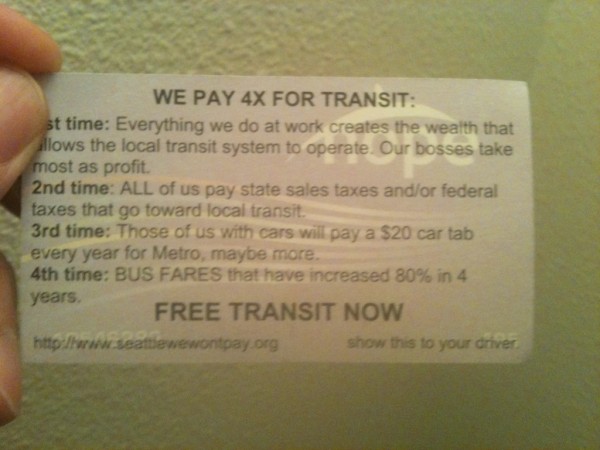 There’s a lot to take issue with in these statements, and taken together they form no syllogism.  But let’s agree with the overall point for a minute on its face: we really are paying full price for transit, but that price is hidden from us and spread out. The price at the fare box is getting higher, but when added all up, taxes and fares, we’re all paying too much for transit.

I can agree with that point, but how is making it “free” going to help? The flawed logic comes home to roost when you consider that if we simply stopped charging for transit at the fare box—essentially creating a system wide “free ride zone”—then all those other taxes we pay would get more expensive to make up the difference. Sure, prices at the fare box have gone up, but abolishing them would mean all the other times we pay for transit would just get more expensive.

I would suggest to the We Won’t Pay folks that it is “free” that got us into this mess in the first place. The idea—as suggested on the We Won’t Pay website—that society and the economy should provide “Everything for Everyone” is what has driven government policy for the last 6 decades. Because there was such a demand for “free” highways and roads to get to our mortgaged single family houses backed by Uncle Sam, we got miles and miles of highway, which induced more and more people to drive. After all driving is “free,” right?

The perverse logic of transit funding is not that we’re paying more for it, but that we’re not paying the real price for other things that make less sense and are more resource intensive like roads and driving. Ironically, the more we sprawl and drive, the more expensive transit gets because demand for transit is more expensive to supply.

Building highways, sprawl, and keeping driving cheap ought to be the target of the We Won’t Pay crowd. Their slogan ought to be We Should Pay—for roads and driving. Such a policy would certainly generate revenue and internalize costs where we want them, making things we don’t want people to do more expensive. It’s also a good reason to squash Tim Eyman’s Initiative 1125 which would make it hard to do exactly what I’m talking about.

Lastly, the anti-corporate crowd has adopted a kind of know nothing approach to the free market. The truth is that we need more density and aggregation of demand to make different kinds of transit work. More demand close together makes for more efficient and cost effective transit. Maybe if we had enough aggregated demand for transit it might even become profitable, and the competition could make prices go down and efficiency go up.

But we’d have to build more housing which means loosening limits on zoning. That might lead to more developer profits too, and my guess is the Occupiers and Ride Free crowd wouldn’t like that. The solution to expensive transit is private investment in dense housing development, good land use policy to support density, and putting a higher price on driving. But that’s really complicated. Why not just create a witty slogan that fits on a piece of cardboard instead? 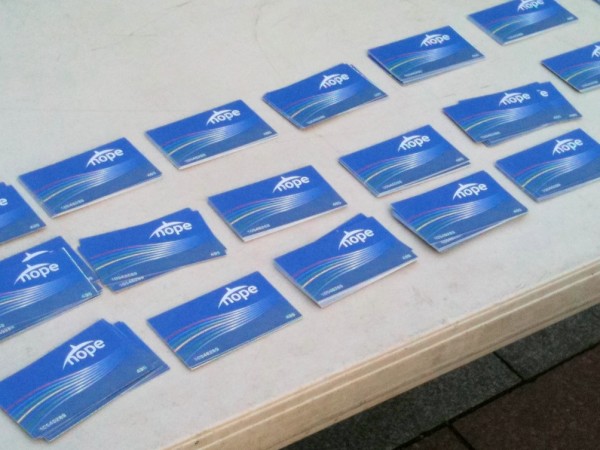 57 Replies to “We Should Pay: Free Ride Advocates Miss the Point”