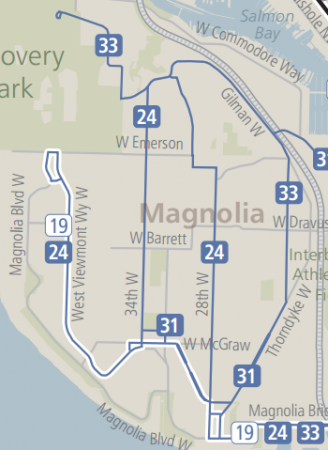 Today in the Seattle Times Traffic & Transit Blog, Mike Lindblom has a post about community activists in Magnolia, fighting to restore some late-night Route 24 trips to Magnolia:

Late service on Route 24 was cut in the countywide Sept. 29 service change. Metro restored one of those lost trips, leaving Sodo for Magnolia at 10:20 p.m., in its February 16 change.

While cutting these trips was probably the right thing to do given the current route structure, it was the wrong to do if Metro and the King County Council member for this area were interested in actually maximizing the ability to get around on transit, as opposed to minimizing the number of pissed-off people. The surprising thing about Route 24 is not that the late-night trips perform so badly, but that anyone rides the thing at all past Interbay.

Route 24 is one of the few non-streetcar routes that has never been changed since its introduction as a motorcoach by Seattle Municipal Railway in the ’40s: it has a bizarre zigzag structure that forces most riders in Magnolia to travel miles out of their way to get anywhere. The only two pockets of density in Magnolia served by the 24 are at the top and bottom of its segment on 34th Ave W (at Government and McGraw), neither of which are served very well; the section on West Viewmont is virtually unused, presumably because it’s surrounded almost exclusively by fabulously expensive, low-density housing.

Presumably for these reasons, Metro planners in September originally proposed axing the 28th and West Viewmont sections of the 24, and instead running the bus up 34th, to Gilman, and then to Ballard. Doing this would have provided far better service to downtown for the pockets of density in Magnolia, and given them a new option, to go to downtown Ballard without a car — an option I suspect many residents might have considered, given that downtown Ballard is precisely the kind of active, pedestrian-oriented, parking-constrained place that transit exists to serve.

Such a route would cost less to run than the current arrangement, and be better patronized; it would therefore likely not be subject to deletion under the Service Guidelines. The loss of coverage in West Viewmont (whose residents would keep commuter service on Route 19) is a tiny price to pay for this. It’s incomprehensible to me why the managers and elected officials in charge of Metro, who cannot fail to be aware of these facts, are not willing to stare down a small amount of organized opposition to do the right thing for the larger population they serve.

65 Replies to “Fight for Sane Bus Routes, Not More Trips on Insane Routes”