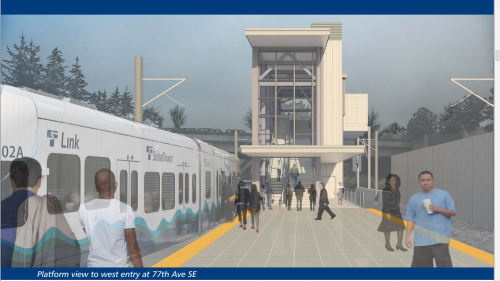 Thursday evening Sound Transit staff conducted an open house at the Mercer Island Community Center focused on the East Link light rail extension. Approximately 80 to 90 people, including staff, trickled in throughout the evening, which included the brief opening, presentation, and Q&A sessions. The presentation centered on the design of Mercer Island Station in particular, approximately 30% complete. Essentially, the alignment of the track is completely determined at this point; several Sound Transit engineers at the open house intimated that this was the crucial first step of the design.

“There’s a lot of work ahead of this, but we’re at a point where we have a good idea of what’ll work correctly,” said David Hewitt, founder of Hewitt, an urban planning and design firm handling the design of Mercer Island Station .

As one resident put it: “They’ve done their homework.”

The Mercer Island Station (a working name) will squat firmly in the center roadway of I-90, with light rail running on either side. From 77th and 80th Avenues SE, riders can stroll into the western and eastern entrances of the station, respectively. Detailed images and layouts are available here.

Each entrance will consist of a plaza with ticketing and seating areas, leading to an escalator, a stair, and an elevator, with surrounding lightweight steel and glass structures. The east entrance will also have a bicycle cage for secure storage. Once a rider descends 25 feet onto the central platform, she has roughly 380 feet of open space in which to frolic, with a central canopy serving as weather cover. Sound-dampening walls specially designed to absorb I-90’s acoustic assault will outline the tracks.

“It’s fairly symmetrical in nature,” Hewitt said. “The scale of the station is a very pleasant one we think.” 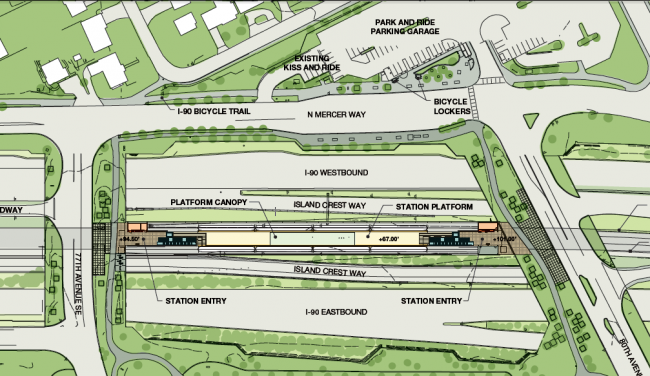 Paul Cornish,  project manager at Sound Transit, stated that the target opening date was 2023, and that they expected about 2,000 boardings a day from Mercer Island.

“It’s still a great challenge,” Cornish said, “since we’ll be building the first light rail on a floating bridge in the world.”*

Several other residents of Mercer Island chimed in with similar concerns. Cornish responded: “We’re actively working with the city [of Mercer Island] to see if there’s opportunity for a joint project that makes sense for developers and commuters in the city.”

He spoke of possible additional parking spaces, but emphasized the joint nature of the project, without any concrete details.

A retiree from a community in North Mercer Island asked whether a bus unloading zone to the station for possible shuttle access was a concern.

“There’s consideration there could be a bus drop-off zone and where is yet to be determined,” Hewitt said. “We think the entire operation at the east end is undecided, so think that might work.”

ST spokesman Geoff Patrick has since clarified that the existing stops on North Mercer Way will remain, and “we are exploring the possibility of a future stop adjacent to the east station entrance.”

WSDOT needs to prepare two additional HOV lanes before the station construction begins in 2016, when the center lanes are scheduled to be closed . These two additional lanes will run from the I-5 junction in South Seattle through the Mercer Island Station. A Mercer Island resident  expressed concern that commuters from the East Side would simply pour into congestion at that point.

“We’ve talked with Metro and having a bus lane adjacent to the light rail tracks which would serve the PM peak buses which are the buses that get clogged down in traffic,” Cornish said, and added the matter was currently in discussion. Don Billen, East Link deputy project director, later expanded:

So we did some early service integration work with Metro route by route. For example, route 550 will be replaced by light rail, maybe route 554 will be intercepted…but those are subject to future planning. That additional bus lane may run between the Rainier ramp on westbound I-90 [titled the D-2 roadway] all the way to exit at 5th and Airport.

Billen emphasized again the matter was being discussed with the city of Seattle, and also clarified that I-90 had enough room at those points to allow for the bus lane without widening the freeway.

“In the morning buses could use the main line and get off on 4th,” Billen said, “and in the afternoon, use that additional lane.”

Sound Transit estimates 50,000 daily riders by 2030 on East Link. According to spokesman Geoff Patrick, these usage figures are based on a number of different variables, including available and possible parking spaces, population, urban density, and so on. The total budget is estimated at $2.8 billion (in 2010 dollars), although that figure doesn’t figure in recent savings that Sound Transit recently announced .

*The state legislature called for an Independent Review Team to investigate the construction of light rail on the I-90 floating bridge, among other issues. Cornish explained that weight tests were conducted with loaded trucks, along with further testing of light rail tracks at UW. Cornish added that Sound Transit is also building a test track at the national track test site in Colorado, and will ship out two test vehicles next month.