[UPDATE: I forgot to link to the materials. Here are the display boards and slides.]

On February 25th Sound Transit briefed the community around the future East Main Station, just south of Downtown Bellevue. Trains will take riders from there to Chinatown in 16 minutes and Overlake Transit Center in 14. ST projects 2,500 daily boardings in 2030, which is middling by present-day Central Link standards but low for 2030.

Unlike the promise to encase the neighborhood around South Bellevue Station in single-family amber, the presentation states that almost three-quarters of the quarter-mile circle may have “potential” for TOD. In the figure below, the whole upper left-quadrant (everything above and to the left of the colored lines, in the Surrey Downs neighborhood) is the only area not under consideration. Ultimately, the zoning will be up to the City of Bellevue. Unfortunately, a significant portion of that area is consumed by I-405: 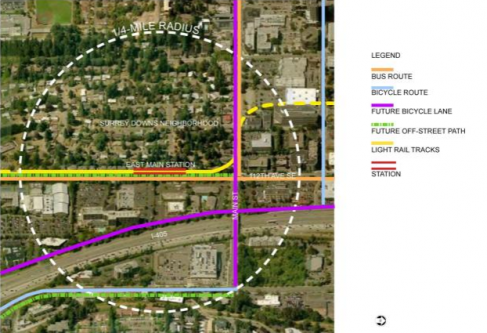 Indeed, the Surrey Downs neighborhood’s total lack of interest in benefiting from the light rail project looms over several aspects of the design. In particular, note that both entrances to the station are on 112th Ave SE, facing away from Surrey Downs, and indeed there is a large retaining and sound wall shielding residents from any inkling of (or easy access to) the Station. It’s regrettable for the cost-effectiveness of the project (and future Surrey Downs residents), but Sound Transit is right to focus on where the population growth can occur. 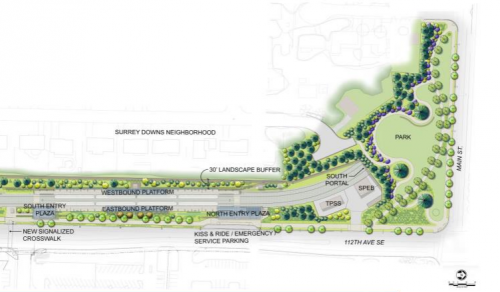 Although there are two entry points, and they are understated enough to provide a short walk from the street, there are other regrettable aspects of the design. It may not be surprising that the precious land near the south portal will be given over to a park, rather than a more intensive use, but it is a shame. More importantly, the geometry of the station and portal places the nearest entry point about 400′ from Main St, which is the main cross street and the main access point for both the downtown Bellevue street grid and I-405 crossings. Every foot north the station moves exponentially increases the walkshed.