On April 22, there will be a special election to fund King County Metro. Below is an updated version of a post I wrote a year ago explaining the context. You can also read the STB editorial board’s arguments in favor of Prop. 1.

What are we voting on April 22?
We’re voting on King County Proposition 1: a 0.1% sales tax and a $60/year car fee (with a rebate for low-income individuals) to fund roads and transit in King County over 10 years. 60% of funds raised would go to buses, and 40% to roads.

Why are we having this vote now?
King County Metro is facing a serious budget shortfall in 2014. This means that they’ll need to cut service by 17% to break even. 600,000 service hours will be cut.  65 routes would be deleted, and 86 would be reduced or revised. All in all, 2/3 of Metro routes would be affected.

Wait… didn’t we just do this two years ago?
Sort of, but it was temporary. In 2011 King County passed a $20 “congestion reduction charge” on all vehicles registered in the county. This bought us $25 million a year as part of the deal that also ended the Ride Free Area, but it will expire in 2014. 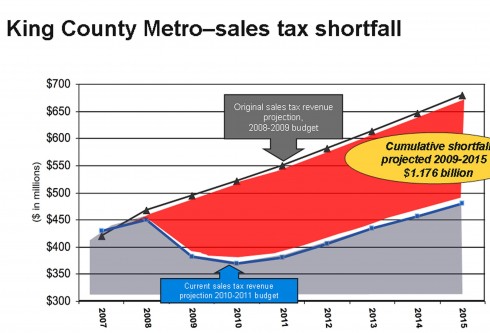 Ok, that’s bad. Can’t they just, you know… trim the fat?
Well, they have been.  In 2008 they reduced operating expenses, gutted the capital fund (which pays for important stuff like running new trolleybus wire, etc.), and increased fares. That bought $30M.  It also arguably made the system more efficient. Then in 2011, they passed the CRC and got the unions to take a pay cut, saving tens of millions more.  WSDOT came through with $32M in mitigation money to deal with Viaduct headaches, but it also runs out in 2014… two years before the Viaduct opens. This mitigation money helps add additional trips to crowded West Seattle routes.  . (Update: the mitigation money has been restored for now.) All told, Metro has cut $726M from the budget since 2009. There are probably a few  routes that could  stand to be cut, but doing so now would do way more harm than good. 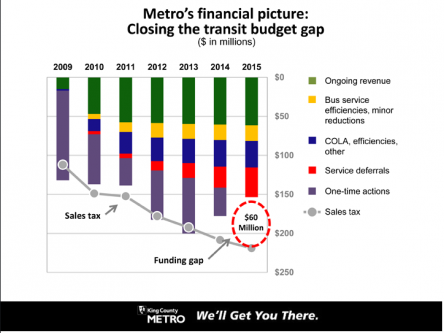 Oh, and “cutting the fat” ain’t so easy if you’ve ever been to a community meeting where cuts were proposed.  People get angry, they call their Councilmembers, and Metro backs off. Everyone seems to think the fat is in some other neighborhood.

(All that aside, Seattle’s a growing city with a healthy economy and a low unemployment rate. Metro should be increasing service, not cutting it, as Metro’s General Manager Kevin Desmond argues here.)

What about raising money from the fare box?
They’ve done it multiple times.  There’s only so much blood you can squeeze from a stone. Back in 2006, when peak fares were just $1.50, Metro predicted fares would rise just 75 cents by 2016.  As it turns out, peak fares are already at $2.50 and will probably rise again soon.

Okay, how about all that money spent on light rail and streetcars?
Those were built by different agencies (Seattle DOT, Sound Transit) with different funding sources. Sound Transit has a diversified funding base, including a Motor Vehicle Excise Tax or MVET along with a sales tax. That means Sound Transit can weather the recession a bit better.  Also, Sound Transit spends a lot of its money on capital projects like new light rail lines, which (a) can be spread out over more years if necessary, and (b) tend to get cheaper when there’s a recession and construction firms are hungry for work.

Okay fine, but what about the “Transit Now” tax we passed in 2006?
That was great! It got us RapidRide and a bunch of other stuff. But because it was a sales tax, it shrunk during the recession and ended up raising less than projected.  Since those funds were earmarked for RapidRide as the voters approved them, they can’t be moved into another bucket to save costs.

Wait a minute, this is craziness… Why are Metro’s finances in such bad shape to begin with?
Back in 1999, state voters approved Tim Eyman’s I-695, which would have gutted transit funding across the state by eliminating the state’s ability to charge an MVET.  I-695 was declared unconstitutional, but then-Governor Locke and the legislature were so scared of being run out of Olympia that they killed the MVET themselves the following year.  That blew a $500M hole in the state transportation budget. Here in King County, Metro lost an estimated $125M over the 2003-4 biennium, which we replaced by increasing the sales tax from 0.6% to 0.8% (and eventually to the legal maximum of 0.9% in 2006 with Transit Now). But there are two problems with a sales tax: it’s regressive, and it’s tied to the economy. Once the recession hit in 2008, everyone cut back on spending and sales tax revenues went in the toilet. It’s not just Metro: transit agencies all over the state, including the Washington State Ferries,  haven’t really made up for the money they lost after the MVET went away.

So what can we do about it?
Ideally we’d bring back MVET funding, at least here in King County. The thing about an MVET is that it’s progressive and predictable (versus a sales tax, which is regressive and volatile), since it’s based on the current value of all the cars in the county.  This would get us back to a healthy mix of tax revenue so that no one source can send the budget into a tailspin. However, the legislature declined to give us this authority.  What we can do instead is vote on a sales tax and a flat fee on cars, which is exactly what’s on the ballot April 22.

You’ve convinced me. How do I vote?

Look for your ballot in the mail.

102 Replies to “Explainer: Why We Need to Save Metro”