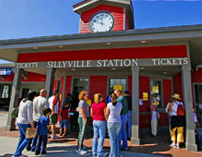 (2) Sound Transit and the Fair will be honoring package-deal tickets, which include the cost of the round-trip train ride and the cost of admission to the Fair.

There are several options for getting those last few blocks between Puyallup Station and the fairgrounds:
(1) Walk to the east end of the station, turn south on Meridian Ave N, and walk south a few blocks.
(2) Catch the Pierce Transit shuttle to the Red Gate. The shuttle is free for anyone with an ORCA card or a Sounder ticket applicable to the correct day.
(3) Take Pierce Transit’s new route 425, the Puyallup Connector. You will recognize the bus by its beautiful, artsy paint job.

Sounder will not be providing service on September 13th and 20th between Puyallup Station and Tacoma Dome, South Tacoma, and Lakewood Stations. Instead, Pierce Transit will be running express shuttles between Lakewood Towne Center, Tacoma Community College, South Hill Mall, and the Fair’s Blue Gate. The PT shuttles will charge regular Pierce Transit fare, and run hourly 9:30 am to 10 pm Monday-Thursday, and half-hourly 9:30 am to 11:15 pm Friday-Sunday.

For all public transit services, up to four kids age 5 and under ride free with each responsible adult.