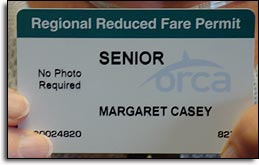 Martin recently asked if King County Metro’s senior fares ought to be raised to the legal maximum of half the regular adult peak fare. I believe that the senior/disabilities fare should go up more than is currently planned in March 2015, but not when paying with ORCA product (e-purse or pass loaded on an ORCA card).

There has been some misconception that the various agencies participating in the Regional Reduced Fare Permit program cannot charge a higher senior/disabilities cash fare than the senior/disabilities ORCA fare, partially because the inter-local agreement that created the Regional Reduced Fare Permit in 1982 was written before ORCA was conceived, and partially because four parties to the RRFP agreement (Thurston Intercity, Mason, Jefferson, and Skagit Transit) are not participants in the ORCA project.

First, lets look at the actual language of the agreement

Each of the parties shall honor valid Regional Reduced Fare Permits issued by any of the parties. This agreement does not attempt to standardize privileges among the parties. [author’s emphasis] Time of day restrictions, transfer privileges, and cost of daily fares and monthly passes shall be set by the respective parties.

Now, about that edge case, where RRFP holders from non-ORCA counties take a trip to King County, and expect their RRFP to be honored. It would be, but at the slightly-higher cash rate. Or, they could load up ORCA product on-line or when they get to an ORCA vending machine, and get free inter-agency transfers for two hours, at least within the ORCA-ized agencies. Citing these very occasional trips when someone may get charged an extra quarter because they have a non-ORCA-ized RRFP (when, really, the rider is taking a much larger hit due to paying cash fares three or more times each way if they don’t use ORCA product) as a reason to not incentivize all RRFP holders to pay with ORCA product is just goofy. If anyone has a legitimate beef here, it is the RRFP-holders from the ORCA-ized counties whose loaded ORCA product is not being honored by the non-ORCA-ized agencies.

Lest anyone think STB likes to pick on seniors, let me point out that various posters here have called consistently for cash surcharges on *every* category of fare payer, especially those paying the regular adult fare. I just don’t want legally-unfounded arguments about the supposed inability to charge higher RRFP cash fares to become a roadblock to tacking a cash surcharge onto the regular adult fares. One of the benefits of the low-income fare program ought to be to free up the county council to follow up with an additional cash fare increase for regular adult riders.

This is not a call for anyone to pay higher fares every time they ride the bus. This is a gentle request that those who make the effort to load ORCA product, and board several times faster than those fumbling change, get rewarded for their effort.

Why would it be worth it for RRFP-holders to push for this differential? Because then future fare increases could be based on percentages rather than a flat amount.

31 Replies to “RRFP Cash Fares Can Be Higher”