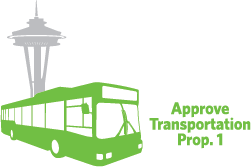 Seattle is booming. According to the latest census forecasts, Seattle is now the fastest-growing large city in America.  Between 2000 and 2014, we added almost 80,000 residents inside the city limits. Judging by all the construction cranes dotting the skyline, we’re nowhere near finished.

Yet despite the population growth, bus service in Seattle hasn’t expanded significantly in years. King County Metro tried twice to expand service over the last 15 years. Each time, unfortunately, an economic recession forced the agency to pull back, leaving service levels basically where they were in the ’90s. This September, Metro was in fact forced to cut service when various post-recession stopgaps finally ran out.

It should come as no surprise, then, that many buses are packed. On the most popular routes, buses are frequently so crowded that they have to leave passengers at the stop. After 7pm, many Seattle buses are infrequent. This makes things difficult for folks who work nights and weekends, or who just want to ride the bus for something other than commuting to work. Meanwhile, volatile tax revenue and years of crisis have diverted staff focus from improving the system.

This November, Seattle residents will have an opportunity to finally address some of the system’s problems instead of play defense. Seattle Transportation Proposition 1 would raise approximately $45m per year inside the city through a sales tax increase and a vehicle license fee, both expiring by 2021. Low-income residents would get a partial rebate on the license fee. This new revenue would translate to about 260,000 hours of new bus service per year if there are no further King County cuts.

Initially, this fall’s Transportation Prop 1 was conceived as yet another last-minute effort to save existing service.  Fortunately, thanks to yet more belt-tightening at the agency and an improving economic climate, Transportation Prop 1 would instead expand service and improve reliability on dozens of Seattle’s core bus routes. More peak trips would be added to several routes, while others would see more service in the evenings and weekends. The legislation contains clear language that prevents Metro from using Seattle money elsewhere in the County.

Prop 1 isn’t perfect. We would prefer a countywide solution, but voters rejected that in April. Unfortunately, the money can only be spent on bus service, not on capital improvements like improving bus stations or adding new bus lanes. You will find no greater advocates for these projects than us, but we recognize that other measures can address these needs, and meanwhile demand for service is large.