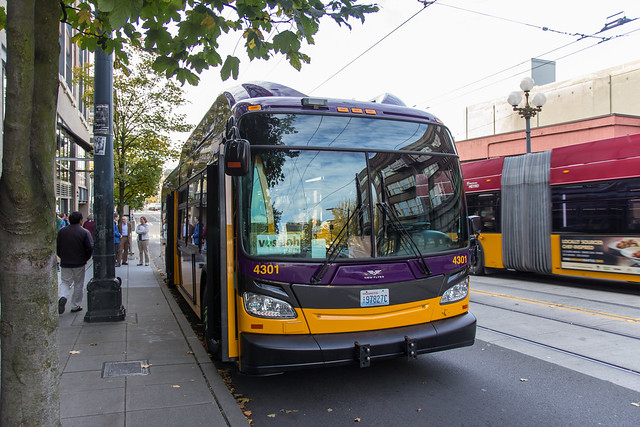 If you’ve been on the streets of Seattle lately, you may have noticed one of Metro’s prototype 40 foot trolleys cruising the streets. Identical twins 4300 and 4301–officially New Flyer XT40 trolleys–are out simulating service on a 90 day test run. This allows Metro to identify any minor adjustments that might be needed prior to New Flyer’s production run beginning in early 2015. The remaining 84 vehicles will start arriving in June and will hit the streets after they’ve been tested and had various accessories installed (farebox, bike rack, radios, etc). The 60 foot prototype will arrive around March 2015, with production of the remaining 54 beginning in late 2015 or early 2016.

Metro has taken these trolleys up Queen Anne, James and most of the other substantial grades that the trolleys currently run on. About 85% of all the current trolley wire has been tested. Metro has also run the coaches with barrels filled with water to simulate a 130% load–both on and off wire. A 150% test will take place in January. 1.8 miles of Friday’s 2.2 mile media ride was solely on battery power and used just 10% of the battery’s capacity. 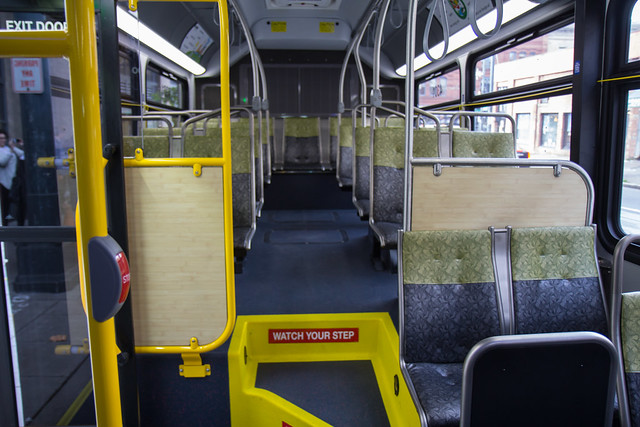 The interior retains a 2×2 layout, save for two seats opposite the rear door. Seat colors are noticeably different from the rest of the fleet and 1970’s wood paneling has made a return, albeit in a light birch color. Forward-facing seat lovers can rejoice since only two of the 19 seats in the rear of the vehicle face inwards. The interior as a whole is very similar to that of the Orions. A plethora of cameras connected to a DVR are scattered about inside and out. Metro opted for forward-facing wheelchair restraints but is using the Q’UBE 3-Point Securement System where a sliding bumper takes place of the fourth securement strap. Passengers with upper body strength will be able to secure themselves.

Metro’s contract stipulated the vehicles need to be able to travel a minimum of 3 miles off wire, and during testing they’ve been able to reach that goal. Metro plans to keep battery runs to a mile or less during revenue service. Currently, Metro motorizes whenever construction work takes place within 10 feet of the trolley overhead. Often, only a half block is de-energized. The new trolleys will be able continue through de-energized wire without needing to drop the poles. Further, the new trolleys will allow the operator to raise and lower the poles from their seat. This video shows unracking at the beginning and racking at the end. Pans would be installed wherever re-racking is common. But since the vehicles can travel along dead wire with the EPU providing propulsion, the majority of the time it will not be necessary to raise or lower the poles. 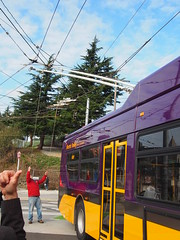 During our test run, we turned from S Jackson St on to 8th Ave S and attempted to drive on what turned out to be dead wire. The driver–who is not normally a transit operator–didn’t specify whether or not he took the necessary steps to throw the switch (this switch is probably radio controlled and would be activated by the vehicle’s right turn signal). Regardless, the poles wanted to continue going straight even though the vehicle turned white. The poles came off the wire which is exactly what Metro’s line crew wants. They lowered so they wouldn’t get caught on the overhead wires (a costly repair). The operator had to exit the vehicle to rewire since we weren’t completely lined up with the overhead.

Save for the air brakes and suspension, everything on the vehicle is powered by electricity–even the doors. All vehicles will have electric heating and air conditioning. The top speed is governed to 39 MPH. On battery, the top speed is around 15-20 MPH. In either mode, heating, air conditioning, and other ancillary services may be powered down automatically to ensure the continued performance of the motor (such as when climbing a steep incline). Similar to that of many hybrid or electric automobiles, regenerative braking will add power back to the batteries or overhead down to about 6 MPH when regenerative braking becomes less effective. Due to the regenerative braking and other efficiencies (such as weight) Metro expects the New Flyer trolleys to be about 20% more efficient than the current fleet. Coupling this with weekend diesel savings, and reduced maintenance costs of the overworked Bredas, Metro is set to operate a lean trolley fleet. 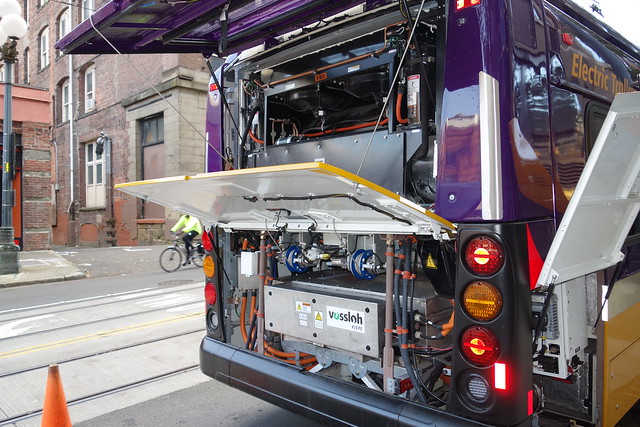 Metro is currently deciding whether or not it can electrify other routes, such as the 48S. If it’s feasible and Metro isn’t subject to future service cuts there will be another procurement using additional options specified in the previous contract. The current order is only enough vehicles to run the current trolley network (plus a few spares).

Metro is also excited about the two fully electric 40′ Proterra vehicles that will be arriving around the same time as the 60 foot trolleys. These vehicles will spend a great deal of time in the R&D phase as Metro evaluates them in a wide variety of applications–including freeway routes. Metro will install two fast recharging stations: one at Bellevue Base and a second at a yet-to-be-determined location (Eastgate TC is the current frontrunner).

Photos from nearly every angle can be found by the author, Gordon Werner, and Neil Hodges.