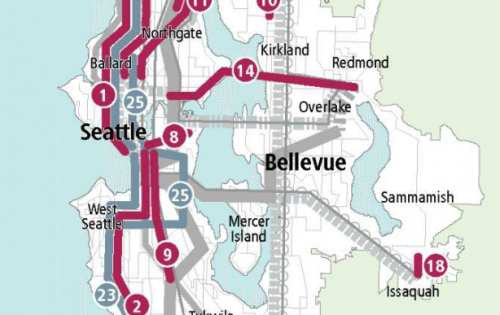 Many commenters noticed an oddball among the potential new corridors being considered for inclusion in Sound Transit’s long-range plan (LRP). Corridor 25 calls for high-capacity transit from Ballard to Queen Anne to the Central District to West Seattle(!).

Now, like most of the updates discussed in last week’s workshop, Corridor 25 may not make it to the final LRP. As Adam noted in his writeup, it didn’t have many people speaking out on its behalf. ST spokesperson Geoff Patrick noted that the corridor, like many others, was included based on public feedback during the comment period.

While Corridor 25 might not have many fans, it represents a significant departure from the X-shaped system Seattle has been talking about building since the ’60s. It acknowledges that development has moved north from downtown since then, and any long-range planning document ought to at least consider the possibility of high-capacity transit through South Lake Union, the fastest-growing jobs center in the city. Heck, it might even accommodate a sorely-needed second station somewhere on Capitol Hill.

Finally, this corridor opens up our minds to the idea that all North-South HCT must go through downtown Seattle. Despite all of what we know about the advantages of grid-based transit networks, the high-capacity transit we’re building and planning generally follows a radial approach.

The deck seems stacked against Corridor 25 making it into the LRP.  West Seattle and/or Ballard will probably ultimately be served via a line from Downtown, as expected.  But here in this moment, when things are still in flux and it’s all still lines on a map, it’s interesting to ponder.