On December 18, the Sound Transit Board approved updates to the Long Range Plan, last revised in 2005. The corridor map saw 13 additions. There were also several text amendments. Most were uncontroversial, particularly those that were bringing the LRP up to date with other policies adopted since the last LRP update in 2005. Some, particularly those that seemed to have implications for ST3, were more challenging for the board.

I’ll describe the text amendments first, and then the map changes.

Interesting amendments included the adding of a goal to “support vibrant, walkable communities and place-making around HCT stations” (T4); to “consider adding infill stations that were deferred in Sound Move or ST2 as part of a future system plan” (T9); support for “efforts that will maintain speed and reliability for buses using freeway HOV or managed lanes” (T20); a commitment to “favor cities and counties with supportive land use plans” (T13); “integrating the planning and operations of local and regional transit agencies” (T14); affirming that streetcars could be a service included in the LRP if they operated in exclusive or managed rights-of-way (T27).

Two amendments provoked lively discusssion. Text amendment T1 described criteria used to select projects.  Representatives from Pierce County sought clarification that the criteria were not in ranked order (perhaps concerned that ridership was the first item listed?). Staff confirmed the criteria were in no particular order.

Of more consequence, text amendment T18, offered by Murray and O’Brien, would have opened a discussion about funding alternatives for a second tunnel through Downtown Seattle (and other similarly significant regional facilities). This drew opposition from other areas. Some saw it as a distraction from the completion of the spine (to Tacoma, Everett and Redmond). Others were concerned about the implications for subarea equity. Although a tunnel is one option for service to West Seattle, it would also be useful to other regional services, including rail on SR 520, as capacity was reached on the existing tunnel. Therefore, it would make sense for all of the areas to contribute. Despite the implications for West Seattle, it was assumed that a second tunnel would not be built before ST4. That amendment was rejected on an 8-6 vote.

A number of corridors were identified for future study (T23-T26), but not included in the map at this time. Most familiar to readers of this blog is the Northern Lake Washington HCT crossing. Earlier in the process, a Kirkland-Sandpoint crossing was proposed as a map amendment. That amendment was withdrawn. The text amendment defers inclusion of such a crossing on the map, instead suggesting future study of cross-lake options when ridership demand exceeds capacity for existing cross-lake transit options or East Link. Along with the Sandpoint to Kirkland crossing, such a study would include alternatives on SR 520 and SR 522. Other corridors identified for future study run from Issaquah Highlands to Overlake (via Sammamish and Redmond), and along NE 145th from State Route 522 to Link.

M2 adds Corridor No. 2 from Downtown Seattle to West Seattle and Burien as a Light Rail corridor.

M5 adds Corridor No. 8 (BRT) and 30 (rail) to Downtown Seattle along Madison Street as a High Capacity Transit (HCT) corridor. Board member Earling asked whether Metro should be the provider on this corridor. Member O’Brien defended the corridor, explaining that Metro is building a BRT service, but it might be appropriate to shift operations to Sound Transit in future.

Boardmember Earling withdrew an amendment to add Corridor No. 24 from Seattle to Edmonds via Ballard and Shoreline Community College, optimistically suggesting that others might also withdraw amendments for corridors that would not soon be prioritized.

Other than the somewhat unlikely Burien extension to the West Seattle corridor, South King saw no map changes.

M28 adds Corridor No. 42 from Woodinville to Bellevue as a Regional express bus corridor.

M7 adds Corridor No. 10 from SR 522 to SR 520, serving Totem Lake and the South Kirkland P&R as a HCT Corridor. Earlier language had not included South Kirkland. An earlier amendment had suggested a Totem Lake-South Kirkland-Seattle express bus. Connectivity at South Kirkland is a priority for the City of Kirkland, but one wonders about the implications of this amendment for the superior service options along the ERC (already in the Plan).

In the Snohomish subarea, just two amendments were offered. Both were at the request of the City of Everett, and were approved. M8 adds Corridor No. 13 from Lynnwood to Everett serving Paine Field and the Southwest Everett Industrial Center.  M3 adds corridor no. 3 from Everett to North Everett.

These seem an effort to influence the alignment of the planned spine extension to Everett. Everett representatives had previously argued that North Everett was always their intended endpoint for the spine, citing ridership at Everett Community College and other nearby institutions. The college is about 1.5 miles from downtown Everett.

Pierce County offered a dozen amendments, five of which were accepted.

M4 adds part of Corridor No. 6 from Downtown Tacoma to Tacoma Mall as a light rail corridor and the terminus of the light rail spine. The original language would have added a longer corridor from Dupont to downtown Tacoma, so the language about this being the “terminus of the light rail spine’ suggests the Board is shutting the door against further southward expansion of Central Link, though not foreclosing expansion of Tacoma Link.

M10 adds Corridor No. 15 from Downtown Tacoma to Tacoma Community College as a light rail corridor.

M19 adds a high capacity corridor from Puyallup/Sumner to Orting. This is an effort to improve access to Sounder for riders from East Pierce County. Despite the HCT designation, Sumner Mayor Enslow envisions this as rail rather than bus. M22 adds Corridor No. 22 from Downtown Tacoma to Parkland as HCT. M17 adds Corridor No. 27 Meridian Avenue to Puyallup as a BRT corridor.

It was confirmed at the meeting that Sound Transit has a bill circulating in Olympia seeking funding authority for ST3. Sponsors are Senator Marko Liaas and Representative Jake Fey. The expectation of the Board is that ST3 authority will be rolled into the transportation package. 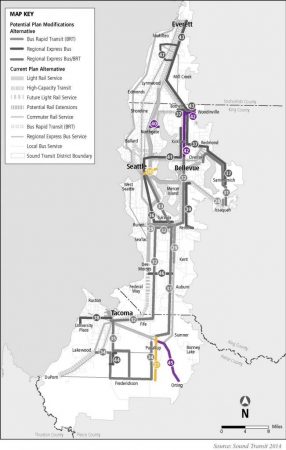 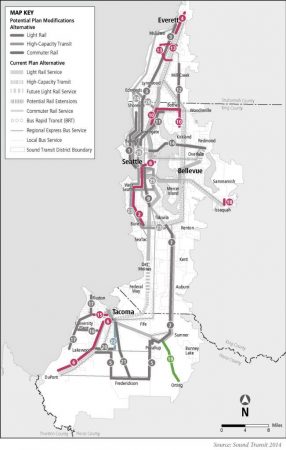