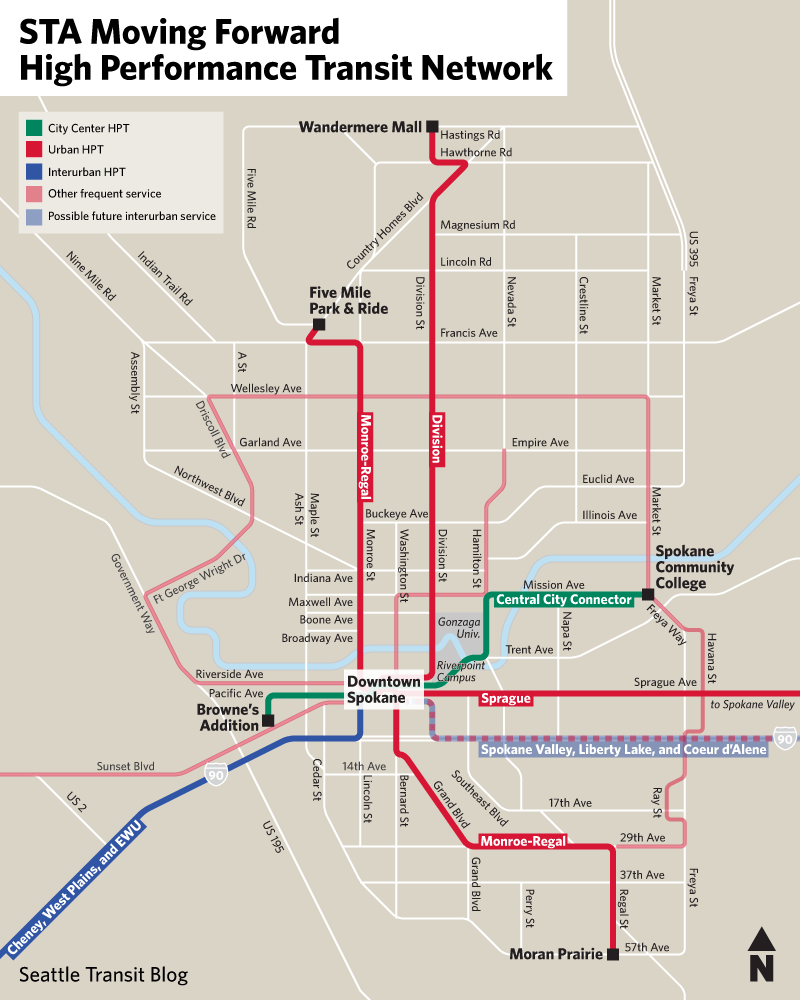 [This is the third in a series covering Spokane Moving Forward, the Spokane Transit Authority’s proposed ten-year plan to improve transit in the Spokane region, which will go to an areawide ballot on Tuesday. Previously I discussed the proposed Central City Line, and improvements for Cheney and the West Plains.]

Spokane’s two biggest transit corridors, Sprague and Division, will feel familiar to residents of Seattle or Tacoma: they are the old highways, just like Aurora or Pacific. Essays in the nascent craft of highway building circa 1930, these streets are wide, noisy and fast; but for much of their length they retain a street grid and a street wall (if not good sidewalks or safe crossing points), before transitioning to strip malls and box stores at the periphery. When 1970s freeways rendered* them obsolete as thoroughfares, people and businesses with money abandoned these streets to lower-income people, and the businesses, and the buses, which cater to them.

Connect Spokane, the Spokane Transit Authority’s long-term plan, identifies Sprague and Division, along with several other Spokane streets, as High Performance Transit corridors. STA’s HPT taxonomy lays out three types of HPT service (I described them in my last Moving Forward post, and you can see a complete map of the desired HPT network here), but essentially, in the medium term, the agency would like to get all urban HPT corridors up to a “lite BRT” service quality that’s something like King County’s RapidRide lines; in the long term, light rail or “heavy” BRT is contemplated for Sprague and Division.

The money required to achieve the full HPT network set forth in Connect Spokane is almost certainty not obtainable with the funding authority that remains available to STA under state law. Instead, for this ballot measure, STA has chosen three corridors to implement “HPT lite“: Division, Sprague, and Monroe-Regal, shown on the map above. A HPT lite treatment is a package of rider amenities, branding and reliability improvements, on a corridor that already meets, or is close to meeting, the frequency standards of the HPT network. Seattle riders, again, can think along the lines of RapidRide, although STA’s idea of rider amenity extends quite a bit beyond the bus stop, and includes building significant amounts of sidewalk in areas while have little or none — expensive and unsexy, but essential for the safety of riders.

Speaking only of service which can realistically compete with owning a (second) car — there are other, meritorious parts of Moving Forward that I won’t get to discuss — what the voters of Spokane will buy, if they pass this measure, is HPT lite radiating out of downtown on the major points of the compass; a flagship HPT line connecting the ridership centers of Spokane Community College, Gonzaga University, and downtown; an interurban HPT line connecting Cheney, West Plains, and downtown; and (non-HPT) frequent service to provide a couple of crucial crosstown connections, and radial service on the remaining points of the compass. A person who lives and works in Spokane (or Cheney) could get around for their daily needs on that network.

Finally, on Monday, I’ll discuss the most tentative, but most attention-grabbing idea in STA Moving Forward: a possible interurban connection between Spokane and Coeur d’Alene.

* I’m cheating a bit with Division: this is the current north-south highway. In the not-too-distant future, it will likely be replaced by the North Spokane Freeway.