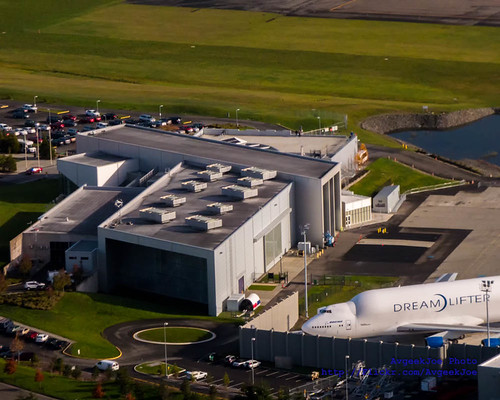 My Aerial Photo: The Future of Flight W/ A Dreamlifter Nose Sticking Through…

I acknowledge the difficulty of asking a transit agency to change a transit schedule broadly advertised and should be reliable to the taxpayers to magically change a community’s main route to service a major tourist-powered economic engine.  A proposal that the Mayor of said community was apprehensive about in a North by Northwest Big Interview.

Speaking of comments, let me be clear, read carefully trolls: To lob from the dark corners of the room the hecklers’ veto and snipe at a major nonprofit doing good works is a classless disgrace and speaks volumes about how some transit advocates misperceive their role.  Make no mistake, I am confident other nonprofits who need transit service are going to keep their hands down and point to your sniping as a reason why not to ask for help. Running a mostly positive campaign clearly has less weight than that of anonymous coward internet trolls sniping because some people are unhappy with their transit service levels now means less transit for all.  Some heckler’s veto to celebrate.

That said this is all in the past. There is one good option left not just for the Future of Flight but also for giving Mukilteo a fair slice of transit service.

If we can get the City of Mukilteo City Council to please pass a resolution as a part of this Community Transit levy lift to request a bus route from 84th Street & Mukilteo Speedway to Seaway via Future of Flight so as to link Seaway Transit Center to the Mukilteo Multimodal Terminal in 2020 & the City of Mukilteo… but this route request requires Mukilteo community support, a bold investment of the City Government of Mukilteo’s political capital, and Community Transit to get its levy lift at the ballot box.

Arguably best to get the Seaway to Mukilteo connection is via commenting on the 2016 Transit Development Plan (TDP) for Community Transit.  In a recent public records request, Community Transit’s Public Records Officer wrote, “The full text of each comment received was provided to board members, initially to the board committee reviewing the plan, and then to the full board.  Comments were discussed in the context of the plan.  The final adopted plan includes the full text of each comment.”  When asked to share route planning for the Seaway Transit Center, Community Transit also replied, “There is no specific route planning for the transit center at this time. It’s too early in the process.”  Therefore a letter from the Mukilteo Mayor coupled to a Mukilteo City Council Resolution would certainly influence Community Transit’s “route planning”.

I will conclude with the genuine concern I have a Community Transit levy lift is going to require transit advocate enthusiasm to win. I know many share my fear a Sound Transit 3/ST3 package that rewards Seattle/North King insufficiently will not be pushed over the top.  So I legitimately fear a Community Transit levy lift transit package that insufficiently excites Mukilteo and Everett will ultimately fail.

Over to hopefully thoughtful comments at 777 words…

Also since I am no longer able to edit what’s posted to Seattle Transit Blog and writing this post is rather emotional for me, I drafted in Microsoft Word.  I encourage other Page Two writers to do the same.

24 Replies to “NORTH BY NORTHWEST 65: FUTURE OF FLIGHT DEFEATED IN GETTING IMMEDIATE TRANSIT SERVICE”