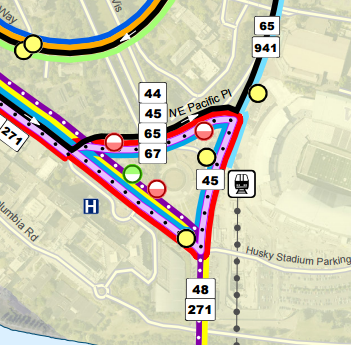 After much STB hand-wringing over the distance between existing Montlake Triangle bus stops and the coming UW Station, at the last meetup Metro revealed that they’re working to improve the status quo.

Sending most 520 buses to UW Station instead of downtown saves service hours that Metro and Sound Transit can use to improve frequency to UW. It can also save time and improve reliability to downtown, but only if Seattle provides transit priority on Montlake Blvd. and the transfer penalty due to stop placement isn’t onerous. That’s why early failures to rethink car and transit flow in the Triangle were so disappointing.

The latest concept is a significant improvement over the status quo. In the figure, the half-green circles are pick-up only, the half-red circles are drop-off only, and the yellow circles are both. Among all-day routes, the 44, 45, and 67 would stop immediately across the street from the station. These routes also terminate there, so transfers from frequent Link to (relatively) infrequent buses should be reliable.

The 48 and 271 would have a southbound stop very close to the station’s south entrance. Their northbound stop, closer to the hospital than the station, would split into a boarding-only and dropoff-only stop, the latter a quicker operation that would block the lane near the intersection for a shorter amount of time. As both routes will terminate in the U-District, few people would likely board at this stop.

74 Replies to “Montlake Stops are Moving”