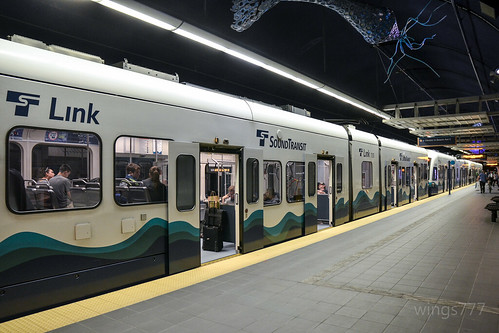 Tomorrow is the deadline to tell Sound Transit which potential ST3 projects you think are most important. I thought I’d share my answers, with a bit of commentary, which of course reflect my personal prejudices. I invite others to share their responses on Page 2 or snippets in the comments.

For background on these routing options, see the main ST3 webpage. The survey asks how important we consider each project, with 5 meaning very important and 1 not important. Unlike Seattle Subway, I didn’t game the system by rating everything at the extremes.

A line that serves Ballard, Lower Queen Anne, and Belltown covers three of the most high-demand neighborhoods that don’t have high-quality traffic-separated transit. First Hill and the Central District are two more, for whom BRT is both inexpensive and the only game in town.

Ballard-Downtown Service also sets up a line to West Seattle no later than ST4, a desirable outcome at any ST3 package size.

It’s an unpopular opinion, but outside the Mercer-to-Jackson downtown core I think at-grade can work for the bulk of the line. This is only because ST assures me that they mean MLK standards, not Central City Connector or (God forbid) SLU Streetcar. It makes the system mildly less reliable, and lowers maximum frequency, but it also makes short stop spacing affordable. Grade-separated is better, but the Westlake line makes the very attractive trade of SLU and Fremont for Lower Queen Anne and Interbay.

Ballard/UW, while cheap and cost-effective, sacrifices neighborhoods south of the Ship Canal for Wallingford, which is not an attractive swap in my view. But I’d gleefully vote for a package that contains it.

First, the least intriguing Ballard option. Second, a modest Rainier Valley mobility improvement, but not one demanded by development pressure or intersecting bus service. Third, West Seattle’s transportation situation is abysmal, and there’s no reason to believe bus alternatives (not a part of the survey!) will avoid the snares of past iterations. But it ranks below Ballard largely because there’s a whole lot of nothing, in ridership terms, between Delridge and the stadiums. I’ve ranked the at-grade option relatively highly because this is the most appropriate place to economize between Ballard and the Junction.

There is little argument for Boeing Access Road except a geometric one. Connectivity at nodes like these enables arbitrary trip pairs without truly outrageous detours (e.g. Rainier Beach to the Museum of Flight via TIBS). But the ridership probably isn’t high enough to make this a priority. Delridge is a reasonably strong corridor but the big, walkable stuff is happening at the Junction.

Bruce made a convincing case that at-grade options can work in Seattle for Link-caliber transit, but not in the core.

Relatively small and unsexy projects that will serve Downtown Redmond and improve express buses in a corridor with little rail potential, respectively.

I’m warm to the idea of Eastside rail, but I have to rate the concept as it is, rather than as I would like it to be. The proposal misses the key ridership generators in order to serve the least-productive Bellevue-Issaquah segment.

South Sounder is successful service, with high ridership, some development happening, and speeds competitive with driving. Doubling down on it makes sense.

Serving Federal Way is a longstanding commitment, and many of these suburban cities display eagerness to capitalize on the investment with growth around the stations. I take quite a few transit trips into South King County, vastly slower than they would be with this extension. Tacoma Link gets off the freeway and connects some promising nodes.

The case for Link weakens as we move south. I have mixed feelings about station access projects, as many people in the station areas would like this to go simply to more parking, while the best options are densification and managing demand through parking fees.

We’ve been through the case for 130th repeatedly.

SR99 is the best of the three ways to get to Everett. The argument for getting off the freeway is well-rehearsed: I-5 both crushes development potential and clogs the access roads buses would need to get to the station.

Sound Transit’s study shows that SR99 has as much ridership as Paine Field with lower cost and shorter travel times. I applaud Snohomish County’s plans to add tens of thousands of jobs at Paine Field, and their desire to serve it well with transit. But those jobs won’t all be within walking distance of the stations, meaning feeder bus service will be necessary. These buses can just as easily go to SR99 as some other point closer to the airfield.

Service to colleges is almost always a winning proposition, thanks to all-day transit demand and a cost-conscious population.

2: Lynnwood-Everett via I-5 or Paine Field

I just couldn’t form an intelligent opinion about these.

No doubt, this is Seattle-centric. From my perch in Columbia City, these are the ST3 segments I would use the most, by far.

Take these considerations to heart, decide where I’m wrong, and tell Sound Transit what you prioritize.