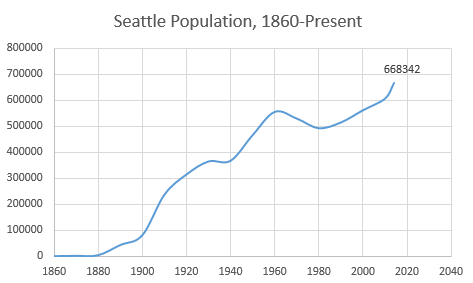 The last few years have seen explosive growth in Seattle proper, the fastest growth since the early days of the last century. But how long can the boom last? By the available data it doesn’t look like it is going to slow any time soon. From a Seattle Time’s article on the construction industry:

Still, he said, indications favor continued growth for the [construction] industry, with overall permits for the Seattle market up 53 percent through April compared with the first four months of 2014.

Permits for multifamily construction rose 104 percent, he said, with 6,700 units permitted compared with 3,313 permitted [in the first four months of] last year.

And the job growth in the area that is pushing population growth doesn’t appear to be slowing:

Another data point is Nathaniel William’s Skyscraper Infographic. I posted it last fall. It’s useful not only to note how many more projects are in the pipeline compared to just nine months ago (45 v 37), but how many projects that were proposed then have already moved to construction, a full 1/3rd (9 out of 27).

Now some people would rather keep their head in the sand and hope this will all go away. That the idyllic Seattle of [insert time they grew up/when they moved here] will return. They hope that the whole knowledge economy/STEM business* is a just a phase, that maybe housing prices in the Silicon Valley will crash slowing the exodus of residents to our region, not just companies from that area. But is it really likely? Or is it more likely that we are a pretty awesome part of the country with a strong economy and high quality of life, and people can see that and will continue to want to move here? Will we continue to see strong growth rates, mostly concentrated in our urban areas? The latter is far more likely, but regardless we should at least be planning for that eventually. Our transportation and housing plans need to be bold and forward looking, not timid and dependent on a growth slow down that isn’t likely to come any time soon.

79 Replies to “What if Seattle’s Population Boom Isn’t Just a Fad? Are We Ready?”