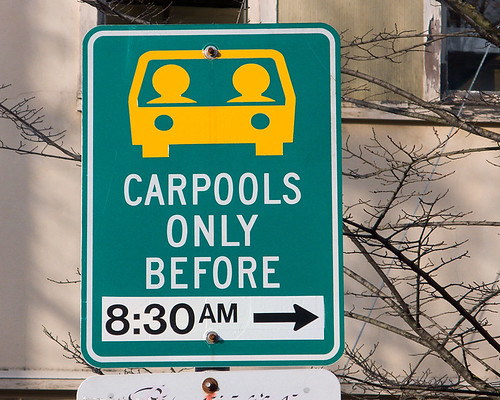 Many years ago, when I had more free time than money, a friend and I mused about a scheme to charge people commuting across the 520 bridge $20 to sit in their car from Redmond to Montlake in the afternoon.  This way they’d get access to the HOV 3+ lane, and we’d make some cash on the side.  This turned out to be wildly impractical, and we never made it work.

I was reminded of this old scheme recently while reading about a new service from Uber.  For a while now, Uber has had a feature called “UberPool,” where they let you carpool with someone else to save money.  Recently, the company began testing “smart routes” which let you save even more money if you get on and get off on a major arterial street.  Many people snarked that this was essentially describing… a bus.

Snark aside for the moment, UberPool seems to work best when there are lots of people headed roughly in the same direction at the same time, like a traditional carpool.  One reason I suspect carpooling is on the decline in America is that it reduces flexibility.  If you have a job that’s a guaranteed 9-5, carpooling can work, but if you need the flexibility to stay late or come in early once in a while, carpooling starts to break down.  UberPool could offer the best of both worlds: an on-demand carpool that leaves when you need it to.

Taking it one step farther, the writer Ben Thompson has argued that the driver of the UberPool might one day be another commuter headed to work, and not a “professional” Uber driver. This person is going to work anyway, so they probably don’t need to be paid that much to pick up a couple of other close-by riders.  That could make the service far cheaper than any current Uber offering – perhaps even cheaper than a bus pass.

I actually wonder if they would need to be paid at all.  If it gave them access to the HOV lane, they might offer to pay the rider instead.  This would also create a much larger and more vocal constituency for free-flowing HOV lanes.

Who knows, maybe someday my dream of getting paid to sit in a car while crossing 520 will come true.

31 Replies to “Uber and the Future of Carpooling”