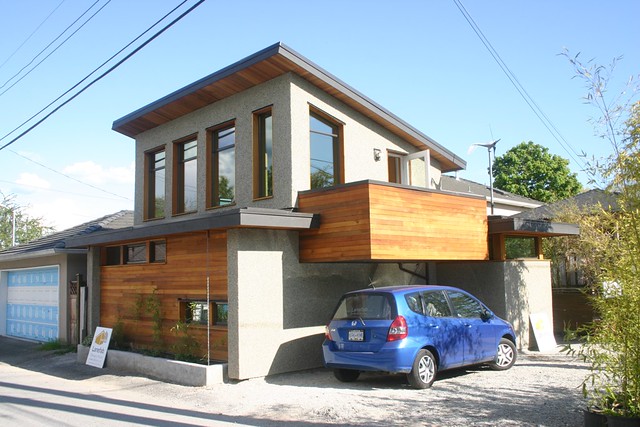 Accessory Dwelling Units (ADUs) seem to be the one form of infill that just about everyone can get behind.  Even after pulling back on his earlier support for allowing more flexible construction in single family zones, Councilmember Mike O’Brien, for example, is still a big proponent of the ADU, as you can see on his website.  A “backyard cottage” sounds so non-threatening, who could possible oppose it?

However, despite their attractiveness to many stakeholders, very few actual ADUs have actually been built in the city (159 as of last December).  Despite efforts by O’Brien and others to streamline the process by providing pre-fab designs and other supports (which I’ve praised), ADUs haven’t taken off.   There are good reasons for this.  Many single family home owners simply don’t have the estimated $55,000 sitting in a bank account.  Furthermore, many lots are irregularly shaped, limiting the utility of pre-fab designs.

One option would be to allow an investor – someone with access to capital – to buy a property, build an ADU, and rent out both units, but unfortunately that’s currently illegal (though that could change as part of the HALA process).  In the current context, then, saying “we need more ADUs” is a bit like saying “we need to bring more jobs back home.” Unless you’ve got a plan to change the fundamental economics, it’s just cheap talk.

Now comes a timely Globe & Mail article from our neighbors to the North in Vancouver, BC, who seem to have reached a limit on ADUs (or “laneway houses”, as they’re called) in certain neighborhoods (via @MarketUrbanism):

…on the west side, laneway houses just aren’t serving their intended purpose. They aren’t marketable to the new offshore buyer, who generally wants a garage instead of a rental stream, she says. Most people who build a laneway on the west side have a very specific purpose, such as providing housing for a disabled or elderly relative.

“If someone has gone to the expense of spending $300,000 on a laneway house, I hope they don’t feel it’s adding value to their 80-year-old house,” she says. “Because unless he can convert that to a garage, the new owner will take that house down. It won’t be what the new owner wants.

($300k? Unless the exchange rate’s gone to hell again, Laneway houses are clearly bigger in Vancouver.)

As single-family homes become more valuable, one might expect similar results here in Seattle.  If you don’t need the money, and don’t have an elderly relative, why go through the trouble of being a landlord when you can have a  bigger backyard or a garage instead?  Or, better yet, tear down that aging, 1,500 square foot bungalow and build a modern, 3,500 square foot home instead.  That’s what current zoning laws seem to be driving toward, anyway.

Which is why, in the long term, we can’t preserve affordable housing by retaining single-family zoning.  Eventually the land in centrally-located, transit-adjacent neighborhoods will become so desirable that the house itself will be a rounding error.  Over the next few decades, many of Seattle’s single-family houses will be torn down whether we re-zone or not. The ones that are left will be gutted, renovated, and completely unaffordable. Back to Vancouver:

“Knock down a house and replace it with a bigger building for a single family … is hardly in line with our city’s goals to become more sustainable,” Mr. Yan says. “But knock it down and replace it with two family homes that are sensitive to the neighbourhood context, I’m okay with that one. And the family amenities are already there.”

Sounds about right.  All of which is not to say ADUs are a bad idea. They’re great! But they’re just one part of an overall affordability toolkit. Relaxing owner-occupancy requirements on the primary unit, so that both could be rented out, would be a sensible next step in getting more of them built.