Yesterday, the King County Council’s Transportation, Economy, and Environment (TrEE) Committee had their first briefing over two March 2016 service change ordinances. The first ordinance (Ordinance 2015-0349, Pages 287-358) dealt with suburban changes such as extending Route 200 to Swedish-Issaquah, looking at Alternative Services in Enumclaw, and the Prop 1-funded split of Rapid Ride C and D and their respective extensions into South Lake Union and Pioneer Square. The second (much larger) ordinance (2015-0350, Pages 359-599) is the big ULink Restructure that we have covered extensively. Let’s take each one in turn.

Splitting Rapid Ride C & D and extending them into SLU and Pioneer Square will be quite expensive. At 51,000 annual service hours, the split would boost service hours by 40% on the C-Line and 30% on the D-Line, at a cost to Seattle of approximately $7M annually. But in return, an additional 65,000 commuters will work within 1/4 mile of a C/D stop, a 40% boost in job accessibility.

Seattle would foot the bill for 20 new Rapid Ride coaches, effectively leasing them for service. If Prop 1 expires and is neither renewed nor replaced in 2020, the coaches would remain Metro property. As staff noted that the service change is intended to be indefinite regardless of Seattle’s funding, there was some unexpected hesitance from both Councilmembers Lambert and Dembowski about this arrangement and its long-term financial impacts on Metro. But tax authority is rarely perpetual and sunset clauses are common, so it seemed strange for Councilmembers to effectively complain that there was a conspiracy to provide lots of new bus service and that someone else wants to pay for it.

Operationally, the C-Line in particular will present some challenges in its interface with the South Lake Union Streetcar and Route 40. In that very Seattle way, there could be 3 separate payment processes and two fare structures at the 4 stations shared by the 3 routes (Westlake/Denny in both directions, Westlake/Harrison southbound, and Westlake/Mercer southbound. County staff said that two ORCA readers are likely at each shared platform, and Route 40 riders would need to know to pay on board, while Rapid Ride C and Streetcar passengers would need to tap the correct reader and/or understand the vagaries of transfer incompatibility. In addition, the real-time arrival technology used on the streetcar and Rapid Ride is incompatible, so the City may install separate readers for that as well. The City pushed back on Twitter and stated their preference to have integrated payment and signage.

There is a grab bag of capital upgrades needed as well, including:

Last on the committee’s agenda, Council staff presented the restructure in a briefing format, with Metro watching from the galley. The meat of the discussion will be deferred until the next meeting on September 29th, at which Metro will get to present the package formally. 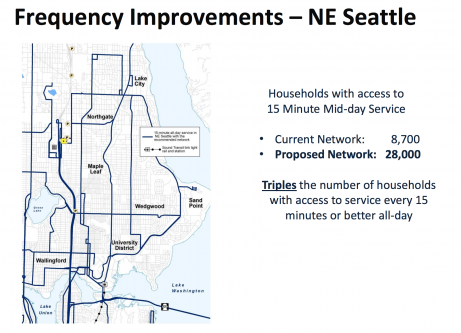 As a brief refresher, the ordinance would fundamentally restructure bus service in NE Seattle, and to a much lesser extent in Capitol Hill, to connect riders with the two new Link stations. Changes include:

The committee heard supportive public comment from SDOT Transit Director Paulo Nunes-Ueno, UW Transportation Director Josh Kavanaugh, and others, but the discussion at committee didn’t discuss the meatier issues of the restructure, instead focusing on a few important but secondary issues.

Councilmember Gossett focused on fare compatibility, reading a letter from a constituent claiming they’d have to pay $10/day to transfer between Metro and Link due to Link’s lack of paper transfers. Gossett asked staff to do a revenue analysis of the hit Sound Transit would take if they accepted Metro’s transfers. Dembowski asked about the 28% of riders in NE Seattle who currently pay cash, and Metro GM Kevin Desmond came to the mic to assure the committee that Metro will do a robust public outreach prior to launch, both to get retail ORCA cards in people’s hands and to enroll riders in ORCA Lift. Desmond also noted that UW – with its universal student, faculty, and staff transit passes – has fewer ORCA access issues than just about anywhere else. No one noted that Metro is an outlier in their continued issuance of transfers, with Sound Transit, Pierce Transit, and Community Transit having abandoned them already.

Dembowski asked staff about the timing of the restructure, noting that he’d prefer the network to stay intact without any optimization until Northgate Link opens in 2021. He suggested three additional options: “doing nothing”, creating a phased approach, and/or implementing a 1-year delay to see if and how travel patterns change. He also criticized SDOT’s investment in Rapid Ride C and D, (incorrectly) stating that “we’re adding 50k hours in South Lake Union while contemplating a revenue neutral restructure in NE Seattle. Why can’t we just add frequent service on top of the current network?” In fact, Prop 1 funds have been applied to both areas, and service hours across the city go way up under the proposal. Metro’s baseline network is indeed revenue neutral, but almost everyone gets more service hours under the proposal.

Again, the next meeting on September 29th will give the committee much more time to chew on the substance of the proposal, with Metro themselves rather than Council staff doing the briefing. Now is the time for thoughtful and constructive conversation with your councilmember about these changes. If you live anywhere in King County you can and should have a say on this, as the urban councilmembers (Phillips, McDermott, Gossett, and Dembowski) get an equal vote with suburban members (Von Reichbauer, Dunn, Lambert, Hague, and Upthegrove) for whom these changes are outside of their district.