Tuesday evening at the Mountaineers (7700 Sand Point Way NE), the King County Council will hold a special meeting of its Transportation, Economy, and Environment (TrEE) Committee. While the public will have had 4 other opportunities to comment at the regular committee meetings (9:30am every other Tuesday), this special meeting will be the only public hearing of the restructure ordinance outside of work hours before it is voted on by the full council (hopefully) later this month. This is an extremely important hearing if you care about frequency, reliability, and a better transit network.

A 6:30pm Open House will precede the hearing, with Metro staff on hand to discuss the proposal with the public. At 7:00pm, the Committee will convene to hear public testimony on the restructure. We strongly urge you to attend and let the Council know your thoughts on the proposal.

Regrettably, the hearing location has terrible transit access, with Routes 30 and 74 getting you there but not home, and Route 75 only running every 30 minutes.  (An irony of this meeting is how much easier it would be to attend if the restructure were already in place.)  If you have a car and would be willing to drive a fellow reader, please speak up in the comments. If you would like to borrow a bicycle for free to attend via the Burke-Gilman Trail, please email me at zach.shaner(at)gmail.com. If you cannot attend, please submit your comments online here. 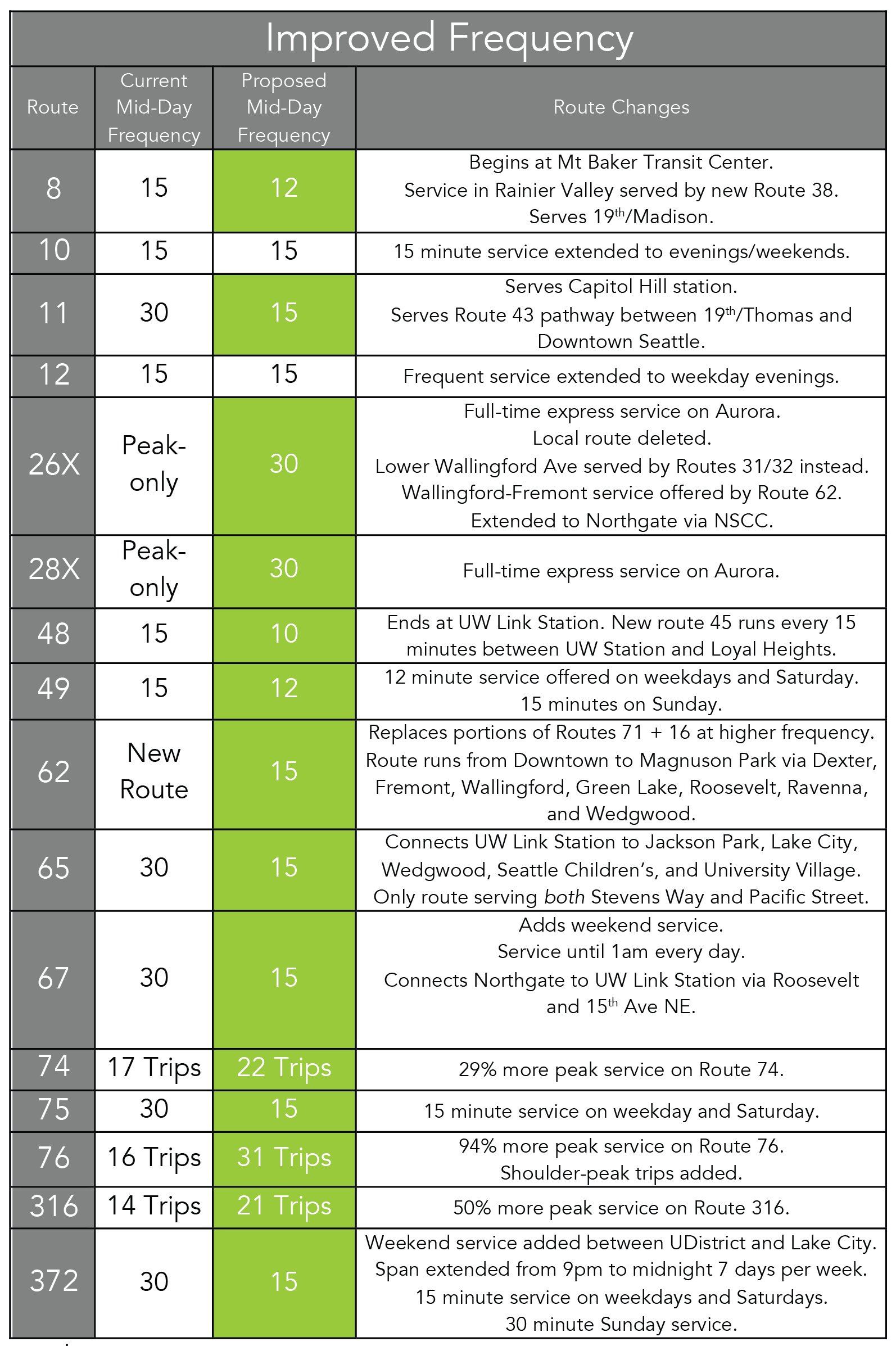 Commentary after the jump.

This is a large, controversial change that we’ve written about at length. Any restructure is inherently disruptive, necessitating that riders learn new routines and travel patterns. But by definition, any fixed-route transit system serves some areas and not others, so the challenge is a utilitarian one, to serve more people with more frequency with every iteration of the system. Refusing to occasionally delete routes and repurpose them elsewhere creates a layer cake of past service decisions that leaves the network infrequent, overly complex, and hostile to riders. It creates a network that is decidedly less than the sum of its parts. It privileges the status quo to such an extent that any service decision is criticized except those that have already been made. We can do better, and this is the beginning of that process, not the end. Let’s the make the system incrementally better in 2016, then far better in 2021 when Northgate Link opens, and better again in 2023 when Lynnwood Link and East Link open.

There are things I do not like in the proposal, but there is far more that I do not like about our current system. Riders are being left out today by lack of evening and weekend service. Would-be riders are driving their cars in NE Seattle today because their lives cannot and should not be built around 30-minute service. Travel times vary wildly today, with a trip on Route 71 taking 35 minutes in the morning and 60 minutes in the afternoon. Our old school one-way express lanes make second-class citizens of anyone who has a non-traditional commute.

This proposal evens the score. It lets Link do the heavy lifting for UDistrict-Downtown transit trips, and deletes routes such as 71, 72, and 73, using their hours to return a huge dividend of service to the transit-starved neighborhoods of NE Seattle that desperately need it. Your frequencies will double (Routes 62, 65, 67, 75, 372, etc) , your routes that end in the early evening will go until midnight or later (Routes 67, 372, etc), and your routes that have never had weekend service suddenly will (67, 372, etc).  If you want to connect to the train, Link will come 66% more often during peak than the 71/72/73, and it’ll have double the capacity. And if you do want to continue on express buses for your Downtown job? You can do that too, with nearly double the service on Routes 74, 76, and 316.

If you want this network, please show up and make your voice heard.