[OV: post was edited on October 26 with clarification from ST on target dates, which may change as the program progresses]

Paying for transit will be easier and more flexible with an improved user experience when “ORCA2”, the second generation of the ORCA regional fare system, is planned to go live in 2020. Although ORCA has matured to become the most popular way to pay fares in Central Puget Sound since its launch in 2009, there is much left to be desired from customers and operators.

Fare collection technology has advanced greatly since the original system began development in 2003. Innovations such as mobile apps and open payments with credit cards and smartphones are being adopted by various agencies across the country. With the current contract with ORCA vendor Vix ending in 2021 and the system’s technology becoming obsolete, the ORCA Joint Board began planning for the system’s next generation last year and has adopted a strategy for ORCA2.

Sound Transit revealed the strategy in a request for proposal (RFP) from firms to lead the development and implementation of ORCA2. The ORCA Next Generation Strategy discusses options and makes recommendations in four main areas: fare policy, system architecture and technology, the transition to the new system, and governance/administration models for the new system.

The biggest change in ORCA2 is the move to an account-based system. This means online card refills will be usable instantly, not after 24-48 hours like today’s ORCA. What’s the difference? Currently, ORCA is a card-based system where value is stored on the card itself. Fare transactions are processed offline by the card reader/writer on board vehicles and at stations. The delay in getting value purchased online on to your card is due to the fact that the readers speak with the backend only nightly, when the buses return to base.

An account-based system takes the opposite approach. As the name suggests, information is stored in an account in a central location, like your bank account. All transactions are processed centrally and in real time. Your card becomes merely an identifier of the account to the reader, like your credit or debit card. Chicago and London equipped their buses with 3G wireless communication to enable real-time processing.

The strategy recommends designing the system for both open and closed-loop payments. Open payment allows ORCA2 to accept contactless credit and debit cards issued by banks and mobile wallets on NFC-enabled devices. ORCA cards will continue to be issued because it has lower transaction costs (faster authorization and no 7% processing fee) and can better accommodate specialized fare policies like the low-income and youth fares and the Regional Reduced Fare Permit for senior citizens and the disabled.

Chicago’s Ventra Card and Utah Transit Authority’s FAREPAY Card are examples of an accounts-based, open payment system. From my experience using it on buses and trains in both places, the processing time for the most part was quick with the occasional lag, about a second or two. The Ventra reader sounds two chimes: one to acknowledge the tap and one for the OK/NO. I used their own card, my contactless credit card, and Apple Pay. It’s nice to have the option of using something I already had in my wallet instead of having to purchase a separate card.

The strategy recommends adopting an open architecture for the system instead of a proprietary system, which is the current setup. An open architecture allows interoperability between components from different suppliers. The increased competition between suppliers should reduce costs and lets the region pick the best product without being beholden to a single supplier. It should be easier to integrate existing equipment into a system with an open architecture.

In fare policy, the strategy recommended that the agencies consider fare simplification in conjunction with ORCA2 development as system complexity and cost increases with the complexity of the fare system. The centralized implementation of agency specific products should be retained. Another major recommendation is to include capability for accumulators and fare capping in the ORCA2 specifications for possible future implementation while agencies hash out the details of revenue sharing and impacts. A number of agencies offer or plan to offer fare capping: AC Transit and VTA in the Bay Area (daily since last year), TriMet and C-TRAN in the Portland area (daily and monthly in 2017), and most famously London (daily since 2005 and weekly since last year).

For the transition, the strategy recommends replacing the field equipment first. Other options considered were running parallel systems and replacing the backend first. The recommended approach, illustrated below, costs more upfront and requires cooperation from the current vendor but minimizes disruption to customers. 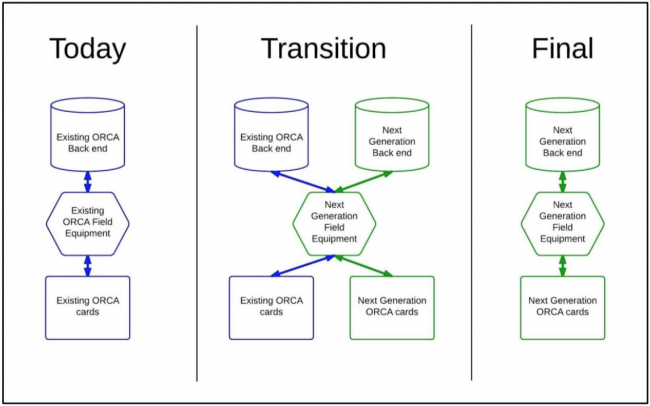 The current division of operating functions between vendor and agencies should be retained, with exception of website content maintenance and design which should be the agencies’ responsibility. The agencies indicated that increased regional control of the website is a critical priority for ORCA2. The current website, which many people here can attest to its poor usability and attractiveness, is controlled by the vendor and changing it can be slow and expensive.

Los Angeles County’s TAP Card is a dramatic example of the pitfalls of vendor controlled websites. Prior to taking it in-house, the taptogo.net website had serious issues like cryptic error messages and confusing user interfaces. I was never able to register a card I bought from a TVM. On the redesigned site, registration of a new account and the aforementioned card was a breeze and the site is much easier to use, while looking great, too.

The strategy does not recommend changing the current governance structure. The Joint Board, composed of representatives from the ORCA partner agencies making decisions on consensus, would be retained. The strategy does suggest an evaluation of the day-to-day administration of ORCA to find possible changes to improve operations.

Proposals from prospective ORCA2 lead consultants are due October 20. If all goes according to plan, riders will see new equipment in the field in late 2019. The new system will start to go live in 2020. The old ORCA system will be turned off by mid to late 2021.

61 Replies to “ORCA2: the Next Generation”