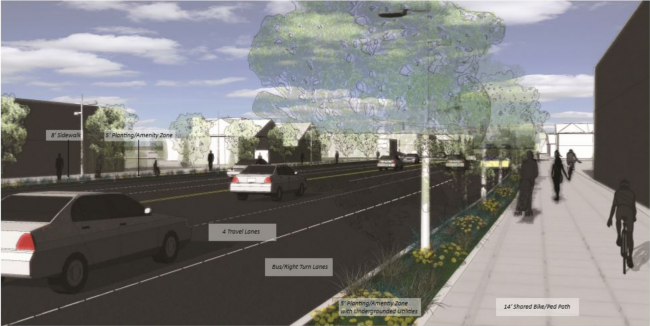 North 145th Street is a mess.  Providing cross-town auto access to I-5 and SR 522 along Seattle’s northern border, it features very narrow sidewalks, an above-average number of car collisions, and few pedestrian amenities.  To add insult to injury (literally), there are utility poles right smack in the middle of the sidewalk, which itself is right up against the travel lane.  If you don’t have Google Maps handy, just picture 23rd Ave through the Central District, except with 50% more traffic and even less regard for pedestrians.

Oh, and it’s a jurisdictional disaster: King County owns the north side of the street, Seattle owns the south side, and on top of that it’s a state highway so the whole thing is technically WSDOT’s responsibility (Shoreline starts at the North sidewalk).

Due to all these wonderful challenges, many transit advocates pleaded with Sound Transit to locate the light rail stations at 130th and 155th, to minimize I-5 conflicts and provide better bus and pedestrian connections (anyone who’s spent any time in downtown Seattle knows that the cross-streets that don’t connect to I-5 tend to be the most reliable for buses).  In the end, however, 145th won out.

To their credit, the City of Shoreline (having already begun an impressive effort to rezone future station areas), has taken on the unenviable task of trying to herd cats and coordinate ped, bike, and transit improvements to 145th.  The main challenge is the limited right-of-way.  Any significant upgrade will require taking property on either or both sides of the street, up to as much as 41 feet of additional ROW, depending on the concept selected.  Proposed concepts may add some combination of a center turn lane, wider sidewalks, a shared bike/ped trail, and bus lanes.  Concept 3, shown above, would include wider sidewalks and Bus/turn lanes in addition to a center turn lane.

Traffic volumes on 145th were between 26,000 and 32,000 cars, near the upper bound of streets that have received road diets in the recent past.   You can learn more about the various options under consideration at the City of Shoreline’s website. A preferred design will be selected in February.