At the December 4 Board workshop, Sound Transit staff shared their latest study of Bus Rapid Transit along the Eastside Rail Corridor between Bellevue and Kirkland. The study parameters incorporate many suggestions from the City of Kirkland. Ten miles of mostly at-grade BRT guideway connect nine at-grade stations: three are in the Totem Lake area, two around downtown Kirkland, one at South Kirkland, and three more in Bellevue. 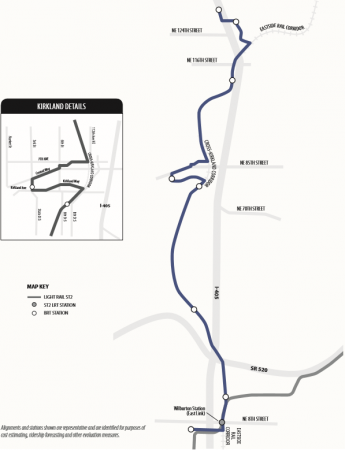 The corridor BRT is well-integrated with regional services. It would connect to I-405 BRT at Kingsgate/NE 128th, to East Link LRT at Wilburton Station, and to regional bus services at the Bellevue Transit Center. An alternative configuration at Wilburton might have an elevated station.

The study acknowledges the need to accommodate the existing trail on the Cross-Kirkland Corridor, and a future trail on the Eastside Rail Corridor in Bellevue. It specifies that the rail would be on the east of the corridor with trail uses to the west.

Ridership is estimated at 2,500-3,500. At first glance, that is surprisingly low – how can BRT on this route produce scarcely more riders in 2040 than Metro 234 and 235 carry today? Sound Transit staff believe the increased number of stops and downtown deviation would make BRT on the ERC less competitive vs. I-405 BRT. With up to three stops in Kirkland (NE 128th, NE 112th, and NE 85th) in the ‘intensive capital’ version of I-405 BRT, that risk would be significant. But the ‘lower capital’ version of I-405 BRT would only serve NE 128th, considerably reducing cannibalization of ridership.

In any case, ridership numbers on the BRT do not include the benefits of an open busway that would serve riders between Kirkland and other destinations, notably Seattle. Kirkland-Seattle ridership alone is three times greater than to downtown Bellevue.

Headways are 10 minutes at peak, using 3-door articulated coaches with ST BRT livery. Peak headways of 10 minutes suggest staff envision the BRT as a supplement to Metro services, on or off the corridor.

Capital costs are up to $747 million though some elements, such as a 1,000 stall garage at Kingsgate, duplicate elements of I-405 BRT. The project includes a contribution toward extending 6th St in Bellevue across I-405, also included in I-405 BRT. The I-405 crossing would allow direct access from the Eastside Rail Corridor into the Bellevue Transit Center, avoiding a transfer to reach downtown Bellevue, and making for easy connections to other buses. 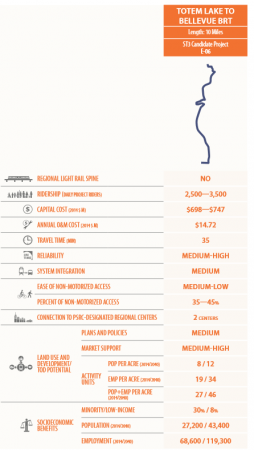 The study shines a light on trade-offs of travel time vs destination access. Sound Transit estimates travel times of 35 minutes from Totem Lake to downtown Bellevue, versus just 16 minutes for rail to Wilburton (the latter, of course, requiring a transfer to get to the Bellevue CBD). Some of the difference is in the denser stop spacing, but some is a penalty for the downtown service that Kirkland sees as critical. Sound Transit models are sensitive to travel times, favoring alignments that do not exit the corridor, but Kirkland is skeptical that riders will be attracted to a service that’s harder to access.

At the workshop, Issaquah Mayor Fred Butler referenced a possible arrangement whereby the Issaquah end of Totem Lake to Issaquah would be served by rail, while the Kirkland end would be served by BRT. Indeed, the rail study outlined some of the elements necessary to make that service model work.

In the context of a 20- or 25-year program, and with uncompelling study results for the higher capital I-405 BRT, some sort of service between Bellevue and Kirkland along the ERC seems certain to be in the system. A more ambitious configuration of BRT or rail serving downtown Kirkland and Bellevue without a large time penalty may be possible. Kirkland’s key interests include downtown access and a transit model that is compatible with trail uses (not taking too much space from trail users, and allowing other users to readily access the trail from either side of the corridor).