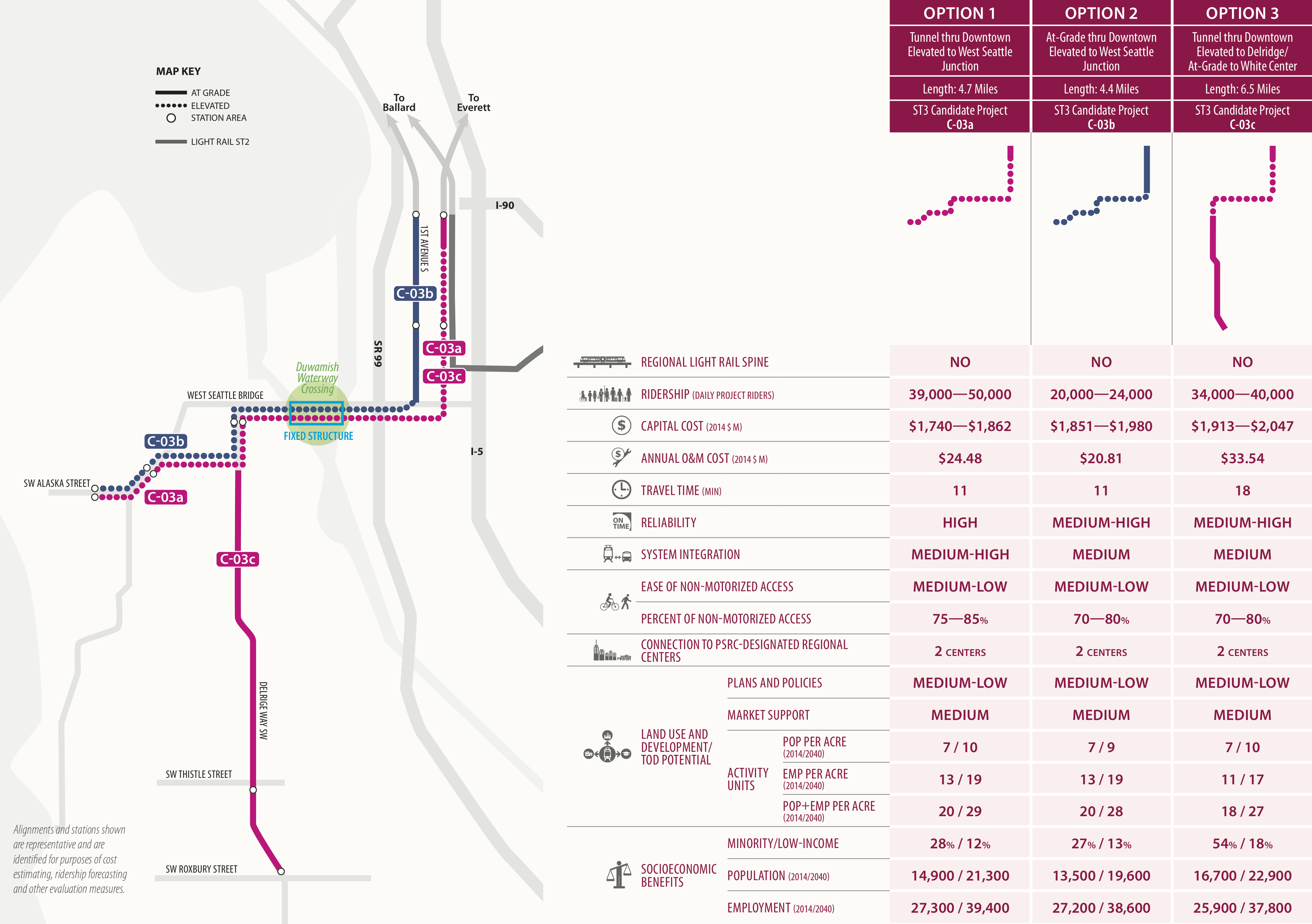 Sound Transit has made it clear they would like a light rail extension to West Seattle part of this fall’s ST3 vote.  Not since the days of the Monorail has a rapid transit extension stirred up so much debate amongst the armchair planners.  While some believe that current bus ridership is too small to justify a multi-billion-dollar light rail line, others note that the peninsula’s recent housing growth, access chokepoints, and cache of transit-friendly voters make it a no-brainer to lay tracks.

Sound Transit has presented three options for West Seattle.   Two would connect to downtown at International District station, and use the existing downtown transit tunnel to continue to Capitol Hill, Northgate, and eventually Everett, while the third would continue up 1st Avenue on the surface.* The split-spine tunnel is now part of the Ballard project, so the West Seattle options all start from the South end of downtown.

Option 1 starts from a downtown tunnel, stops at Stadium Station, crosses the Duwamish on a new elevated bridge, and terminates at Alaska Junction with stops at Fauntleroy and Delridge. It would cost between $1.7 and $1.9B and serve 39,000-50,000 riders in 2040.

On a recent podcast, Martin and I wondered whether it would be controversial if there are elevated light rail tracks running up to the Junction, along with Mount-Baker-like elevated stations.  It’s unclear whether that would be resolved before the extension goes to the ballot, but local advocates are already expressing interest in studying a tunnel.

Option 2 runs at-grade along 1st Ave and then follows the same path as Option 1 to the Junction.  It would cost $1.9B for 20,000-24,000 riders.  ST says that the cost of rebuilding 1st Avenue to accommodate surface rail makes this about as expensive as Option 1 for half the riders, making it the weakest of the three options.  Barring some weird issue where ST decides they won’t build a second downtown tunnel, I have a hard time seeing this one advance.

Option 3 would emerge from a downtown tunnel like Option 1, but instead follow Delridge Way down toward White Center.  It’s a much longer route that skips the Junction, but has stations at SW Thistle and SW Roxbury in the heart of White Center.  A travel time of 18 minutes and a cost of about $2B is good for 34,000 to 40,000 riders.

Option 1 vs. Option 3 sets up a Junction-vs-Delridge/White Center fight.  Whichever neighborhood is chosen, the other would have a bus transfer before the bridge.  Option 3 is slightly more expensive and has slightly lower ridership, but serves a more economically disadvantaged and diverse neighborhood.

ST also looked at a light rail extension from the Junction to Burien via Morgan Junction and Westwood Village. This was not presented as an official “ST3 candidate project,” but it was studied.  It would cost about $2.8B for a 9.1 mile elevated extension. The 22-minute ride would serve 10,000 to 15,000 riders.

*Update 10:52am: Option 2 would continue on the surface, not in the tunnel.