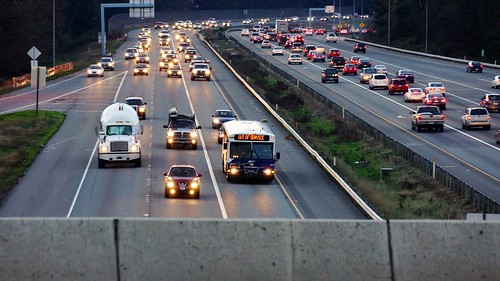 By the standards of most transit agency budgets, Sound Transit’s next round of rail expansion plans will be expensive. Critics, constructive or not, wonder if there’s a cheaper way. There is, in principle, if the transit agency can simply ignore other stakeholders instead of buying them off. The biggest savings comes from simply taking grade-separated freeway space and kicking out as many cars as necessary to ensure free flow of buses.

But that presumes a totally different set of politicians, voter attitudes, and institutional structures from what precipitated the sorry defenestration of Transportation Secretary Peterson earlier this month. Her departure was related to several issues, but the direct cause ($) was the entirely foreseeable backlash against reserving uncongested road space for carpools and transit. Indeed Senate Transportation Chair Curtis King publicly wonders if WSDOT is extracting enough transit dollars from Sound Transit to pump back into the road system. While Republicans are generating all the juicy quotes, Democratic majorities didn’t keep the HOV lanes clear either. Passing a small ST tax package and assuming that WSDOT will deliver good ROW would be foolish in the extreme.

In this environment, truly reliable transit has to build its own right of way. Some Seattle residents snicker at the Everett-Tacoma light rail “spine”, and there are legitimate criticisms of that project. However, it would deliver a commute free of ever-escalating driving times and frequent congestion collapse due to accidents.

STB will always wholeheartedly support using precious road space to carry lots of people on transit instead of a few people in cars (or worse, to store cars). It’s at least plausible to achieve this when local leaders and voters are self-identified transit advocates, as they usually are at the city and county level, and therefore open to pro-transit arguments.  Regrettably, the city and county don’t own much freeway right of way. At the level of government that does own most of it, the center of gravity of the debate is over subtle impacts to SOV travel times. The overwhelmingly positive impact on bus riders is both undisputed, and irrelevant.

Choosing freeway rapid transit as the long-term solution forever holds transit hostage to the whims of a state that considers its fate a low priority, and forever allows highway widening to masquerade as a “pro-transit” measure to ensure the free flow of buses. It’s one reason why people all over the region are hoping for ST3 to deliver them from this trap with light rail – on its own right of way.

89 Replies to “The High Cost of Free Right-of-Way”