With ULink’s opening and Metro’s unprecedented service changes in NE Seattle and Capitol Hill, it’s been a quiet few months for the proposed SE Seattle restructure that it’s safe to say we’ve had a few reservations about. On Monday, Metro transmitted a scaled back version for consideration by the King County Council (Metro blog post here). It will be heard in the Transportation, Economy, and Environment (TrEE) Committee on April 5, with a possible council vote in May. The changes would take effect in September 2016.

Unlike the previous proposal, the proposal would leave Routes 106 and 107 as is, with both positive outcomes (no cuts in Georgetown) and negative outcomes (foregone opportunity for improved connections between Renton and the Rainier Valley, which we’ve been advocating for in some form since 2012). The likely reasons for Renton’s omission are political simplicity and because including Renton would bring the new routes below the eligibility threshold for a Prop 1-funded boost. In a phone call yesterday, Metro staff noted a continued openness to a larger restructure if city funding partnerships emerge. 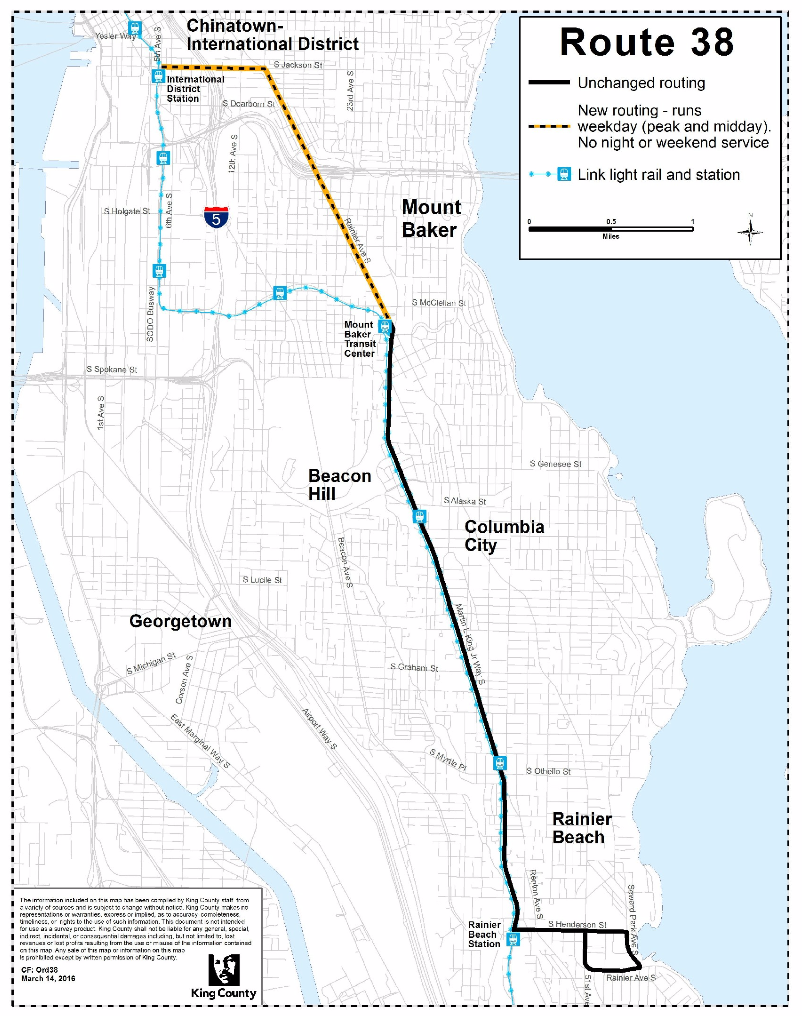 Instead, the scaled-back proposal would simply retain the raison d’être from the original proposal, namely the restoration of a direct connection between mid-MLK (in between Link stops) and the International District. The proposal would extend newly-minted Route 38 to the International District, but only on weekdays from approximately 6am-6:30pm. Evening and weekend trips would continue to terminate at Mount Baker Station as they do today. The extension would be paid for by cutting Route 9 back to peak-period, peak-direction only, which is how a majority of its riders use it today.

The 15-minute route would combine with Route 7 for 10 buses per hour along Rainier and Jackson, albeit at unavoidably uneven combined headways. Routes 7, 14, 38, and Link would combine for 18 services per hour between Mount Baker and the International District. The 38 would be far slower than Link but a tick faster than Route 7, retaining the express stop pattern of today’s Route 9.

During peak hours, savvy riders headed to ACRS or the Filipino Community Center would still often save time by using Link + Route 38 instead of Route 38 alone, as peak hours are when Link frequency is highest and bus reliability lowest. 6 minute Link headways and a 9-minute travel time to Mt Baker (average trip time of 12 minutes) compare favorably to 15-minute Route 38 headways with an 18-minute travel time (average trip time 25 minutes). Transfers between bus and train will be frequent but also suboptimal, as Metro doesn’t have the available funds to both extend Route 38 and offer frequencies to match Link.

In an ideal world we’d ease transfers by expediting the rebuild of Mt Baker, harmonize fares between agencies, reduce or eliminate the ORCA card fee, radically expand ORCA access, and then reinvest these service hours to provide 6-10 minute frequencies on Route 38 and extend it all the way to Renton. But lacking good movement on any of those issues, community advocacy for restoration of MLK-IDS bus service is more understandable. The opportunity costs are significant, but the new route would provide a simple, direct, and frequent connection for cash payers, those using paper transfers, or those for whom a second or third transfer is prohibitive.