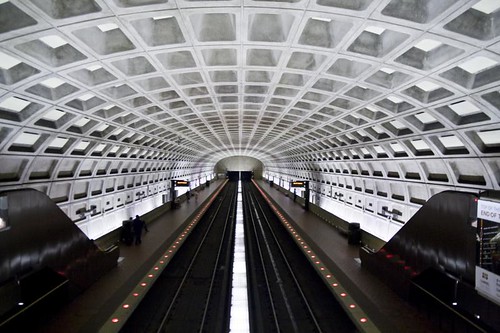 Recently the DC Metro, which has had its share of challenges over the last few years, was closed for an entire day for an impromptu safety inspection. During the outage someone tweeted this article from The Washingtonian about how bad things have gotten at the agency. Once the shining example of postwar US rail, the system is starting to fall apart, for reasons mechanical and political.

As we contemplate expanding Link here in the Puget Sound, let’s make sure we’re not repeating all of DC’s mistakes. For example, replace WMATA with Sound Transit and see if any of this rings a bell:

The first [structural problem] was the power-sharing compact among DC, Maryland, and Virginia. The hastily designed agreement creating WMATA handed control of the agency to political appointees from three jurisdictions (four, once the feds were added). The board reps aren’t required to have a background in transit—they just need to use Metro.

This didn’t hinder the agency much in the beginning, when Metro’s main job was to build new stations. But the arrangement became unwieldy after 2001, once the original build-out was complete. At that point, the agency had to transition from what was a de facto construction company to a rail operator. Officials were now tasked with the more mundane challenges of providing reliable, timely service along 103 miles of tracks. And parts of the infrastructure were already more than 30 years old.

Fortunately, Sound Transit taxes include dedicated operations and maintenance funding, something DC lacks. Still, it’s not hard to imagine a future where maintenance gets shafted in favor of new service:

The board generously supported other parts of WMATA. According to a 2010 report by former Metro GM David Gunn, then a consultant, government funds for the buses doubled and for handicap transit tripled from 2000 to 2009. During the same period, rail funding increased by only 12 percent.

It came down to politics, Gunn says: A board rep might not be able to get a new Metro station in his district—too costly—but could certainly swing a bus stop. “They stripped [funding] out of the rail system, and they had it go to the handicap services or to buses,” he says. “And they did that because those are politically positive things.”

While all this is happening, Metro is trying to become more of a late-night subway and less of a commuter system:

At the same time, board reps began to press for longer service hours—another way to score points with constituents. In 2003, Metrorail pushed back its closing hours to 12 am on weeknights and 3 am on Fridays and Saturdays. That was good news for riders, businesses, and the environment. But it accelerated the infrastructure’s deterioration. The new schedule left less time when Metro was closed and maintenance crews could access the tracks. On weeknights, “you’re talking about three hours of actual work time,” says Aaron Wiggins, a maintenance manager who retired in August after 27 years. “Ain’t a lot you’re going to get done in three hours on a nightly basis. It’s impossible.”

Here in Seattle, a petition is circulating to extend Sound Transit’s operating hours, making exactly the same argument. Late night service is a good thing! But it absolutely does reduce the maintenance window for a system that doesn’t have redundant tracks on which to shift service.  And it won’t be long before political pressure builds to extend hours at the cost of maintenance. It’ll be especially easy now, since they system’s brand new and probably doesn’t need as much maintenance as it will when it’s 40 years old.

In the draft system plan presentation, Sound Transit explicitly compared the 108-mile ST1+2+3 system to BART and DC Metro. That’s a lot of track to maintain, and a lot of rail spikes:

To be sure, many of the problems highlighted by the article are due to a bad work culture inside the agency, not the inherent unsustainability of a suburb-heavy rail system. I just hope Seattle Magazine isn’t writing a similar article 50 years from now.

59 Replies to “A Cautionary Tale from DC Metro”