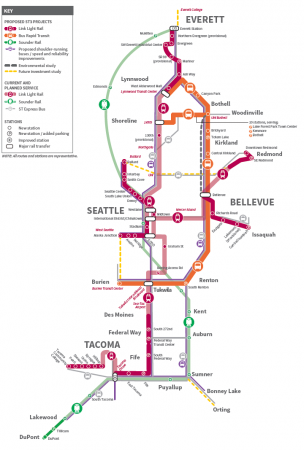 One of the most common analogies for spine skeptics has been a comparison between Link, BART, and DC Metro. The DC Metro, despite decades of neglect, has much higher ridership than BART in a similarly sized Metro area. Critics often give agencies too much credit — or blame — for ridership when the real causes are land use and competing freeways in commute corridors. Nevertheless, I thought the critique of BART was that there weren’t enough stations in dense San Francisco and too much in lower-density suburbs, whereas DC has a fairly dense network in the core city.

I think it’s important to get the critique of BART right: the problem is not that there’s too much in the suburbs, it’s that there’s not enough in the city. I’m not a BART historian, but it’s not abundantly clear that the dollars to build to Dublin would have been available to dig up the western part of San Francisco. It’s not constructive to get mad that someone else’s transit is a little nicer than it has to be, unless there’s a clear line between that and other neglected causes.

In Saturday’s article I shared a chart that shows the core city’s share of the spine-heavy ST3 proposal is nearly identical with DC’s core city share in the metric that matters most, stations, and is significantly better than San Francisco. But that didn’t satisfy the haters. Oakland and Berkeley are somewhat dense, and have destinations in their own right. But that’s also true of Everett, Tacoma, Bellevue, Redmond, and Seatac. Although the average density in the Puget Sound is lower than that of the Bay Area, that’s not a problem Sound Transit 3 can fix before it’s approved, and it’d be a good thing if we built high-quality transit at a lower aggregate density than what the Bay Area achieved.

In any case, my understanding of the complaint is clearly wrong. I’ll be the first to admit that city boundaries are imperfect measures of where the real urban places are. But they’re also a useful, easily measurable shorthand. So, critics, what’s the proper, quantifiable issue with BART that ST3 will replicate?