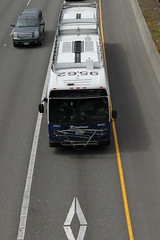 One criticism of stringing light rail lines along freeways is that one could achieve similar transit outcomes at vastly lower cost, by simply taking a freeway lane for transit. Failing that, adjusting HOV lane thresholds so that speeds remain high would achieve much of the benefit of entirely new right-of-way, except when an incident or construction congests the lane. This observation is entirely, unequivocally true.

An alert Everett Herald reader, through the newspaper, asked WSDOT if they would consider this. Bus commute times are rising due to congestion in those HOV lanes:

Either of those fixes would certainly solve HOV congestion, but at the expense of the general purpose lanes, making bad congestion there even worse.

Keeping the regular lanes moving — even if it’s at a snail’s pace — is still a priority, too, with lots of economy-driving business in the corridor. Not everyone can accommodate a second occupant, much less a third. Think also of the semi-truck driver moving freight, who is banned from the HOV lane regardless.

“We need to be looking at the system as a whole. … They’re all great customers. They move a ton of people,” said Travis Phelps, a WSDOT spokesman. “It’s a balance that we have to keep going.”

First of all, shame on WSDOT. This argument undercuts the entire rationale for HOV lanes, which is that it encourages high-occupancy (including transit) through higher operating speeds, increasing the overall person-throughput of the highway. Of course, WSDOT has every incentive to think this way, as the legislature (especially Republicans, but many Democrats) doesn’t care about transit throughput.

Secondly, ordinary transit advocates ready to oppose ST3 because of more cost-effective right-of-way options ought to have a theory of change on how to ensure free flow of buses. In Seattle, it’s possible to win an argument by pointing out the effects on transit (but not always). But initiating change at the state level requires a different rhetorical and interest-trading toolbox. I haven’t seen anyone articulate one, much less successfully execute a strategy. In the absence of such a strategy, relying on freeway expresses is spending less to build crappier transit, which is not transit advocacy worthy of the name.

[UPDATE: The article also reveals that state policy requires WSDOT only to “consider” lifting the threshold when speeds fall below 45mph. There is a federal requirement to do so only in the case when the lane allows single-occupancy vehicles, i.e. a HOT lane.]