In the weeks leading up to last week’s Sound Transit 3 Draft Plan update, the City of Renton made some noise about feeling left out. As part of the East King subarea it has funds to build things, but will see very little in the plan except for I-405 BRT. Some of this perceived wound is based on geographical bad luck, but much of it is also self-inflicted. The city has been speaking out of both sides of its mouth, demanding high-capacity transit while asking Sound Transit for two very transit-hostile things in ST3: financial help moving transit away from its fledgling Downtown and constructing the region’s largest parking garage. Other potential investments, such as a West Seattle-Burien-Tukwila-Renton light rail line, are excluded from ST3 and are many decades away from having either the political will or financial capacity to build it.

So for the time being Renton seems set to get what it asked for, a transit-hostile park & ride and transfer facility, surrounded by some of the worst auto-oriented development in the region, in the vicinity of SR 167 and Grady Way. It will also get BRT access ramps at NE 44th Street, sandwiched between the hills of Kennydale, a Denny’s, and the Seahawks training facility.

Yet questionable municipal preferences aside, Renton is a serious city of 98,000, the 8th largest in the state, and nearly as big as Everett and its spine destiny of high frequency, high capacity transit. There is significant ridership in Renton, both all-day on Routes 101, 105, 106, 107, etc, and on peak-oriented service to Seattle on Routes 102, 111, 114, etc. As jobs continue to concentrate in the Seattle core and Seattle housing fails to keep up, recents trends of suburbanized poverty and increased peak travel demand seem set to continue or intensify. So what could we do for Renton?

There’s one idea that’s been kicking around in my head for years. Over the years on the blog we’ve sung the praises of diesel multiple units (DMUs) as a flexible, low-cost alternative to traditional locomotive hauled commuter rail such as Sounder. There are numerous potential applications for DMU service in the Puget Sound Region, including on the low-ridership North Sounder line and for off-peak service on the Sound Transit-owned Nalley Valley line between Tacoma-Lakewood-JBLM-DuPont. But no one has really discussed using them in Renton.

The Black River line is an active freight spur primarily used for moving 737 fuselages to the Renton assembly plant. The 4.5 mile spur diverts from the BNSF mainline just north of Tukwila to Renton Landing, north of which the Eastside Rail Corridor has been decommissioned as a freight line and purchased for trail use, though Sound Transit retains an easement along the entire corridor. Historically, the Milwaukee Road (now the Cedar River Trail) approached Seattle via Snoqualmie Pass, Rattlesnake Lake, and Downtown Renton. The Downtown Renton station saw periodic use as recently as 2007 for the Washington Dinner Train.

Medium-capacity DMU service would be a great fit for this line. Imagine half-hourly service to King Street Station, with intermediate stations at Renton Landing, Downtown Renton, Boeing Access Road, and Georgetown. An associated restructure could divert Routes 101, 102, 111, and 114 to stations along the line. Even with a 30-mph speed limit on the Renton spur, travel times from Renton Landing to King Street could be as low as 20-minutes, far faster than bus alternatives and providing the direct service that Renton seems to want, rather than subpar transfers from I-405 or peak-hour buses in perpetuity. 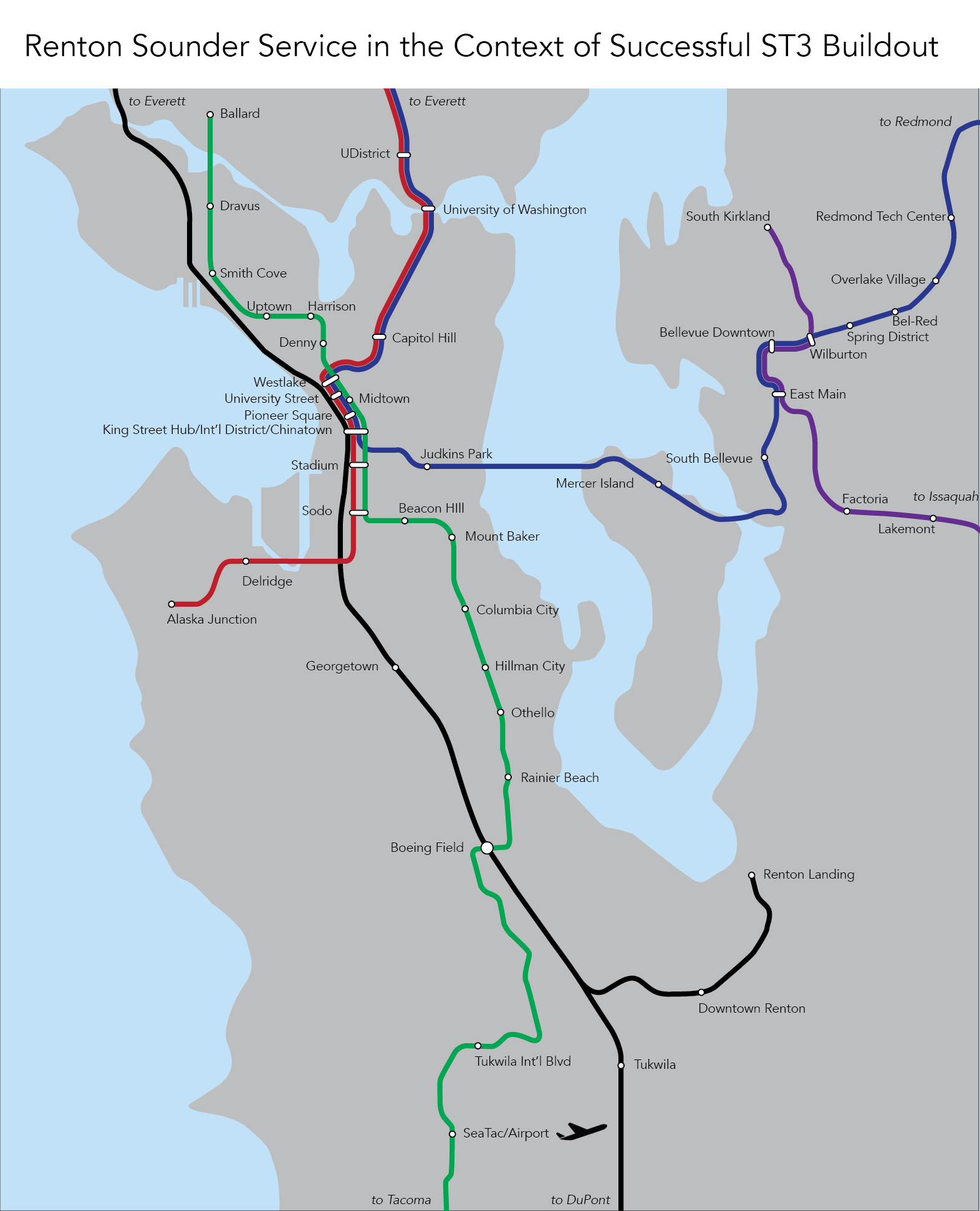 Potential arguments against the idea are numerous and possibly fatal. BSNF easements are typically extremely expensive and only economical at very high passenger densities. Reliable operations would likely require a dedicated track. Serving stations such as Georgetown from the east side of the BNSF main line would require extensive footbridge infrastructure. The unpredictability of Boeing freight traffic would not mix well with passenger trains when the majority of the current line is single-track. There is even 1/4 mile of street-running for the freight tracks along Houser Way just east of the Downtown Renton station. And of course, the idea isn’t on anyone’s radar, much less in the Long Range Plan from which all eligible projects are drawn.

But I wanted to give the idea a hearing, at least among the blog commentariat. It would provide much faster service to Renton and Renton Landing. With bi-directional service, it would be a reasonable commute option for thousands of Boeing workers at the 737 plant. It lies in a resource-rich East King subarea that has lacked for projects. It would make the planned Boeing Access Road Station much more useful, boosting it with all-day demand.  It would be a right-sized service on existing tracks. And it would serve a growing city that needs better service than its current parking-centered dreams.

113 Replies to “Sounder Service to Renton?”