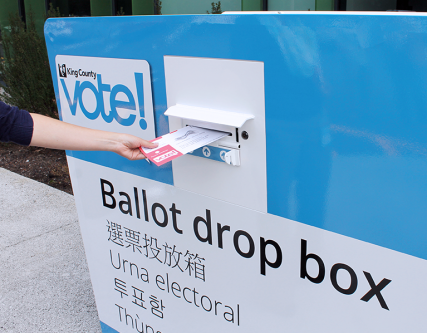 Tuesday, August 2 is primary election day. It’s time to fill out your ballot and mail it in (with 1st class postage, worth at least 47 cents), take your ballot to the nearest drop box, or get in line at an accessible voting center.

You must get your ballot postmarked by Tuesday, drop it at a drop box by 8 pm Tuesday, or get in line at a voting center by 8 pm Tuesday. Don’t forget to sign, date, and put your email or phone on the return envelope.

29 ballot drop boxes are available around the county, and around the clock, including one at the King County Administration Building, 500 4th Ave.

Accessible Voting Sites are open today until 7 pm and tomorrow until 8 pm at Union Station (upstairs from International District / Chinatown light rail station), King County Elections HQ in Renton, and Bellevue City Hall. Voting opens at Elections HQ at 8:30 am, and at the other two sites at 10 am.

Feel free to check out STB’s endorsements before filling out your ballot.

For questions about voting in King County, contact elections@kingcounty.gov or call 206-296-VOTE.