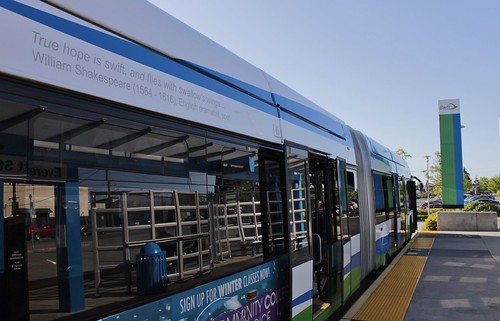 As speculated during the planning process, the first line, which opened in 2009 and runs along Highway 99 from Everett to Aurora Village, will become the Blue Line; and the second line, set to open in 2019 and run from Paine Field through Mill Creek to Canyon Park in Bothell, will become the Green Line. The two lines intersect at Airport Road in southern Everett, forming an X-shaped network in southwestern Snohomish County. Both colors coincide with those of the Seahawks, who are celebrating their 40th anniversary this month.

While Community Transit’s 5-year plan published in May anticipated a September 2018 opening for the Green Line, Community Transit spokesperson Martin Munguia stated that hitting 60 percent design on the project brought a “more realistic picture of both cost and schedule.” Other hold-ups include construction on the 128th Street overpass crossing Interstate 5, where WSDOT is restricting construction to one side of a time to minimize traffic disruptions and thus will be split between the summers of 2017 and 2018 along with station construction. The early 2019 launch will fall a few months shy of the Blue Line’s 10th anniversary in November, and come only four years before the possible launch of a third line to feed Lynnwood Link at Lynnwood Transit Center.

15 new articulated buses will also be ordered and delivered in late 2018, and are planned to be inter-operable with the Blue Line, sharing the same branding and similar features.

Sound Transit’s decision last year to name its lines after colors poses some potential confusion with Swift’s new lines, but Munguia says that the two agencies came together and felt that the two modes were distinct enough to not be easily confused. For the time being, Community Transit will append the Swift brand to every mention of the project.

The $73 million cost of construction will be funded mostly by a $50 million FTA Small Starts grant that is part of the 2017 budget. $17 million from the state will help build the line’s northern terminus at Seaway Transit Center, adjacent to Boeing’s massive Everett factory. Operations will be funded in part by a portion of the 0.3 sales tax approved by voters last November as well as a $5 million FTA Congestion Mitigation & Air Quality grant for the first two years, allowing for the voter-approved increase to fund other services.

The line ends at Canyon Park P&R to the south, a few miles short of downtown Bothell, where an extension has been considered and put on the back-burner until the completion of a major road project by the city; as the line would fall into King County like routes 105 and 106 do today, Community Transit has held discussions with King County Metro about the extension.

The “Blue Line” moniker will begin appearing in schedules, on bus headsigns and at stations near you this fall. When the Green Line begins service in 2019, it will operate at 12-minute headways on weekdays and 20 minutes at night and on weekends, and is expected to attract 3,300 riders in its first year. Additional lines are also planned on major corridors, stretching as far north as Arlington and as far east as Highway 9 near Silver Firs. 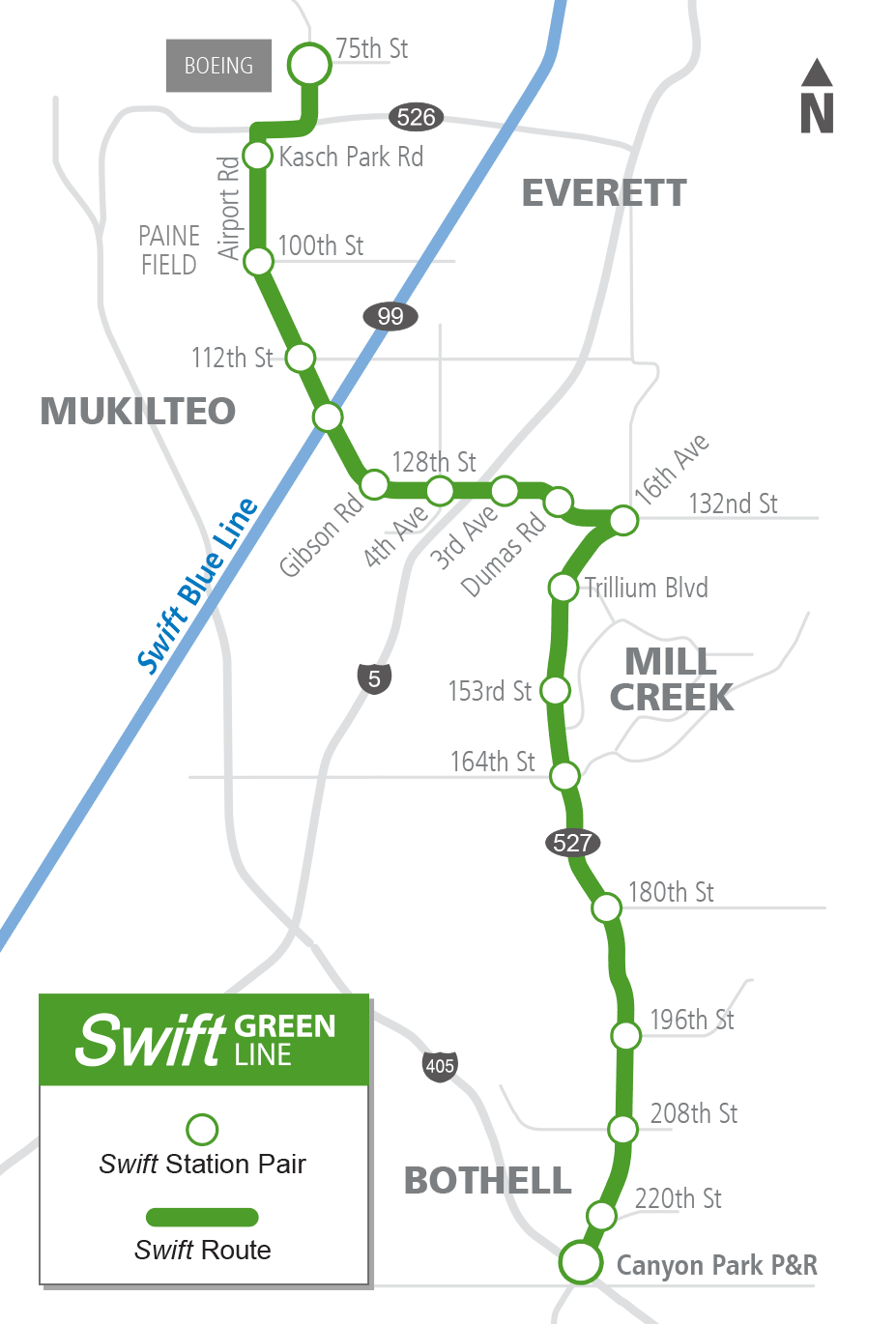 104 Replies to “Community Transit Unveils Colors for its Swift Lines”