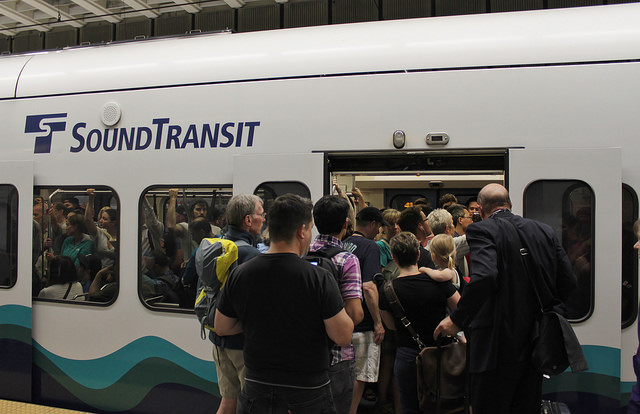 This November we have a generational opportunity to build on Sound Transit’s recent successes, and extend a regional rapid transit network that is able to scale with a growing region. To understand why a yes vote is important, we’ll start from the beginning.

The reasons to favor transit investment over cars are numerous. The immediate environmental benefits are well understood: well-used rail uses less energy per passenger than driving, and that energy comes from sources cleaner than gasoline. The public health benefit of reduced car volumes and the exercise inherent in walking to transit is less familiar. People unable to drive deserve a good way to get around, not just a lifeline. A city with good transit service can devote less land to parking and more land to worthwhile things.

But most importantly, transit scales with growth far better than autos, for the simple fact that each person takes up less space on a transit vehicle than in a personal vehicle. No breakthrough in electric or self-driving cars is going to change this fact of geometry. There is no plausible car-first future. The world’s great cities are dense, and they all realize that high-capacity, traffic-separated transit is the only thing that can work at those scales. Seattle has a chance to be one of those cities, if it doesn’t tie itself to the auto. The alternatives are stagnation, or strangulation by traffic. Even the most car-friendly Western cities — L.A. and Phoenix — have realized that cars don’t scale and are furiously racing to add rail capacity.

There are significant bus investments in the Sound Transit 3 package, and these are important. Rail will never go everywhere, especially in the short term, and many needs are urgent. At the same time, ST3 is fundamentally a rail package, and it’s important to understand the rationale for that.

There are a few attributes of light rail that really are superior to buses, all else being equal, in particular the number of passengers per multi-car train. But the core of high-quality transit, frequency and reliability, can come on steel wheels or rubber tires. That said, in practice our region implements light rail with the understanding that it will never operate in mixed traffic, there will never be on-board payment, and with few exceptions the trains operate on elevated or underground guideways with no traffic interactions whatsoever. Even our finest new bus-rapid-transit lines are entirely at-grade, and there are zero plans to change this. More importantly, buses’ flexibility is often a bug not a feature, as citizens and governments can much more easily dilute their quality, saying, “do we really need to have a dedicated lane here?” The path to true reliability is always to take the right-of-way, or even better to create it. In our current political climate, that means light rail.

Rail detractors will say that buses are much cheaper than rail, and can be just as good. Both are true, but they are mutually exclusive. Rail is expensive because it has its own guideways, and buses with their own guideways would be similarly expensive.

There is one exception where bus guideways already exist: our freeway system. Unfortunately, these are mostly controlled by our state legislature, which has shown no interest in holding even one freeway lane open for transit. And thus our freeway “express” buses are mired in mixed traffic just as bad as some arterials, and getting worse. Furthermore, transit tied to freeways, while valuable for some applications, can neither serve nor induce the truly dense and walkable neighborhoods the region needs, without significant investment in station areas that is inconsistent with low-cost BRT. 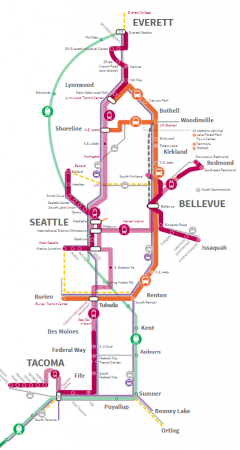 Even if we need transit, and need rail transit, is this the right set of projects? The “right” project is, of course, subjective. But with a few exceptions, we believe the Sounder and light rail lines planned serve their respective cities, corridors, and neighborhoods as well as a rapid transit line can. Most of all, a new downtown tunnel serving Lower Queen Anne, South Lake Union, the downtown core, and possibly First Hill, is needed today, and any unnecessary delay is unacceptable.

Other segments — notably the stretch from Lynnwood to Everett — are not as well-executed, but they are also not doomed to be failures. The pull of rapid transit is strong, and if cities get out of the way and allow development, in most cases it will come. STB will keep busy for years fighting for good station implementations that allow this to happen as much as possible, even when freeways and parking garages constrict what can be done.

Moreover, although we most value projects that maximize ridership and support growth, there are many other valid interests. Projects that don’t maximize ridership aren’t there because of agency ignorance, but because they serve other goals, whether they avoid construction impacts, spread benefits around the region, or avoid hostile neighborhoods. We don’t have to fully support each of those goals to understand why they are there, and we acknowledge that their inclusion helps consolidate support for the must-haves.

The package reflects the desires of the 3-county electorate and its representatives. Sound Transit critics are fond of fixating on 1996-2001, which were indeed so  troubled that the agency barely survived. But after a period of intense reform, ST consistently meets its schedule commitments. This includes election-year promises made in 2008’s ST2.

Clearly burned by its initial experience, if anything ST is being too conservative, and leaving votes on the table by under-promising. The timelines are long, but worthwhile infrastructure projects take a long time. Voting no will simply make delivery slower. Voting no will likely kill the second Downtown tunnel, as a second try at ST3 would undoubtedly be less ambitious and offer lower-quality projects.

If you’re young, vote yes for a carbon-neutral future in which you can live oblivious to traffic. If you’re old, vote yes to leave behind a better region for the next generation. But vote yes.