With the confluence of Mariner and Husky season looming, Mike Lindblom reports that Sound Transit is looking to beef up “mega event” service beyond it’s already-boosted weekend standard of 3 cars every 10 minutes. Sound Transit would do this by running weekday peak frequency but inverting the baseline, with twelve 3-car trains joining seven 2-car trains. During regular peak service today, twelve 2-car trains are the baseline, supplemented during peak by seven 3-car trains.

Much has been made of Link’s railcar shortage and ability to run longer trains for events. Though the opening of Angle Lake Station on September 24th will not change schedules or frequency for existing stations, it will add one new trainset to the rotation, reducing Sound Transit’s flexibility further. Prior to the delivery of next  generation railcars in 2018-2019, Link has only 62 railcars, and Sound Transit is wisely being conservative about lifecycle maintenance. A Board report last month showed that while Link is sometimes uncomfortably crowded, the current service provision is running well within capacity limits.

In a fleet of 62 cars, our current peak service uses roughly 77% of our railcar capacity (48/62), weekends use 58% (36/62), and weekday off-peak uses 39% (24/62). Sound Transit’s “mega-event” proposal would stretch utilization to its furthest yet, or 84% (52/62). And this is just my calculation based on active service needs. Allowing for layover, padding, and operator breaks further reduces flexibility.

What’s the most Sound Transit could possibly do? Before the 2018-2019 delivery of new rail cars, Link’s maximum capacity would likely be 3-car trains every 6 minutes for 97% utilization (60/62). So at 84% utilization, it’s clear that with this weekend ‘mega-event’ proposal, Sound Transit is taking the issue seriously and will stretch its fleet within reasonable maintenance limitations. 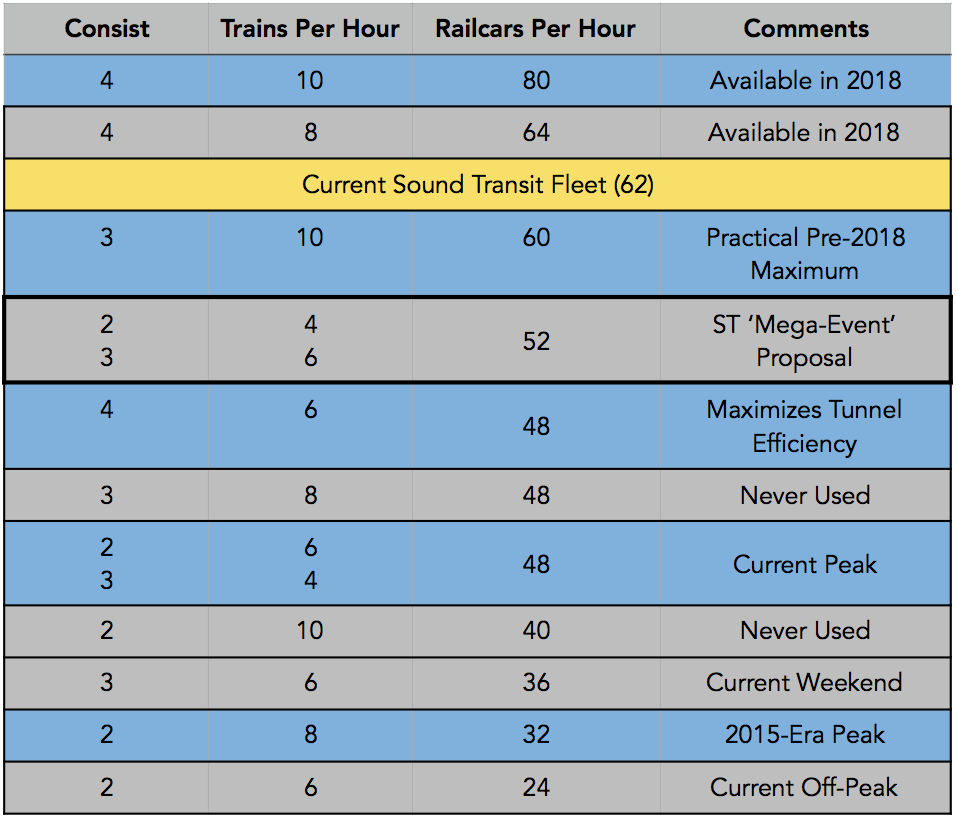 When these big event days are on weekends, Sound Transit has more flexibility due to the availability of bus-rail tunnel slots in the Downtown Seattle Transit Tunnel. Were a massive convergence of events to happen on a weekday, when tunnel bus commuters still need reliable service, I’d suggest that Sound Transit look into a different “tunnel maximizing” level of service. Because every Link train takes up one tunnel slot – buses and trains are prohibited from sharing a platform – maximizing weekday tunnel capacity would involve running longer trains at lower frequencies. 4-car trains running  every 10 minutes would provide the same capacity as our current peak service, while using 33% fewer tunnel slots.