To date, I’ve been pretty disappointed in the public discussion of Sound Transit 3. Instead of discussing the transportation merits, we’ve been lost in hang-wringing over Sound Transit’s advertising expenditures (so much for “run government like a business!”), overambitious responses to public records requests, or other political minutiae. There has been the “multitasking fallacy”, in which SeattlePI’s Joel Connelly suggested halting ST3 until a single SDOT repaving project is done. There has been the forced outrage at the generous corporate contributions to the Mass Transit Now campaign, when if these businesses weren’t contributing the reciprocal headline would write itself: “Local Businesses Balking at Sound Transit Plan, Campaign Contributions Show.” And of course, there’s the always reliable process argument that if only we were slower and more deliberate, things would be better.

So what are we getting in Sound Transit 3? In what ways is it superior or inferior to existing options? And how does what’s proposed fit into the range of plausible political options? Let’s start with Everett.

There is no disputing that a West Seattle to Everett line would be long. At roughly 37 miles depending on final alignment choices, an Everett to West Seattle line would match some of the longest lines in the country, including Dallas’ Orange Line (37 Miles), Portland’s MAX Blue Line (33 miles), and Los Angeles’ Gold Line (31 miles). As STB’s endorsement of ST3 stated, there have been numerous political compromises along the way to the adoption of the System Plan, and particularly so in the Everett corridor.

One outcome of a federated board with subarea equity is that Seattle urbanists don’t get a say in what suburban jurisdictions choose to do with their money, and by choosing to push for Paine Field, Snohomish County has admittedly chosen a speculative play on future development over the reality of current needs. To their minds, a rail-served manufacturing and industrial center is the best possible play for a Snohomish County that doesn’t resign itself to industrial decline and permanent bedroom community status.

I would argue that to deny them light rail on these grounds would be to hold our area to unreasonably strict standards. While the analogies are far from perfect, it’s relatively common to use light rail as an inducement rather than response to development. Surrey and New Westminster were sleepy suburban hamlets before SkyTrain began coming their way in 1986, and suburban Virginia was exurban Virginia before Metro induced massive growth via the Orange (and now Silver) Line. And where we’re only building quality, most other cities just build trains whereever ROW is cheapest, with Denver insistent on building trains where nobody lives and paying Lyft to drive them there. And of course, historic if downtrodden cities like Everett are far more defensible termini than the Dublin/Pleasantons of the BART world. There are good bones in Everett, just a lot of brownfield in between.

Though transit purists may rightfully balk at this sort of comparative defense, it’s also worth considering the broader context with an open mind. Officials have power that you don’t, and they will never respond positively to “you don’t deserve it” lectures from Seattleities insisting they manage their suburban decline rather than attempt to reinvigorate it with their own money. Snohomish County has uniquely terrible traffic relative to the other subareas, with Everett to Seattle travel times wildly variable and often exceeding 90 minutes, and there is no amount of piddling edge work (shoulder-running buses, etc) that can possibly change this. We will not tear out subdivisions for new I-5 lanes, and there are zero indications that the legislature will compel WSDOT to provide exclusive transit right-of-way anytime in the coming decades. And lastly, if stung by a “no” vote on ST3, it is exceedingly unlikely that Sound Transit boardmembers will return with an aggressive Seattle-friendly package. 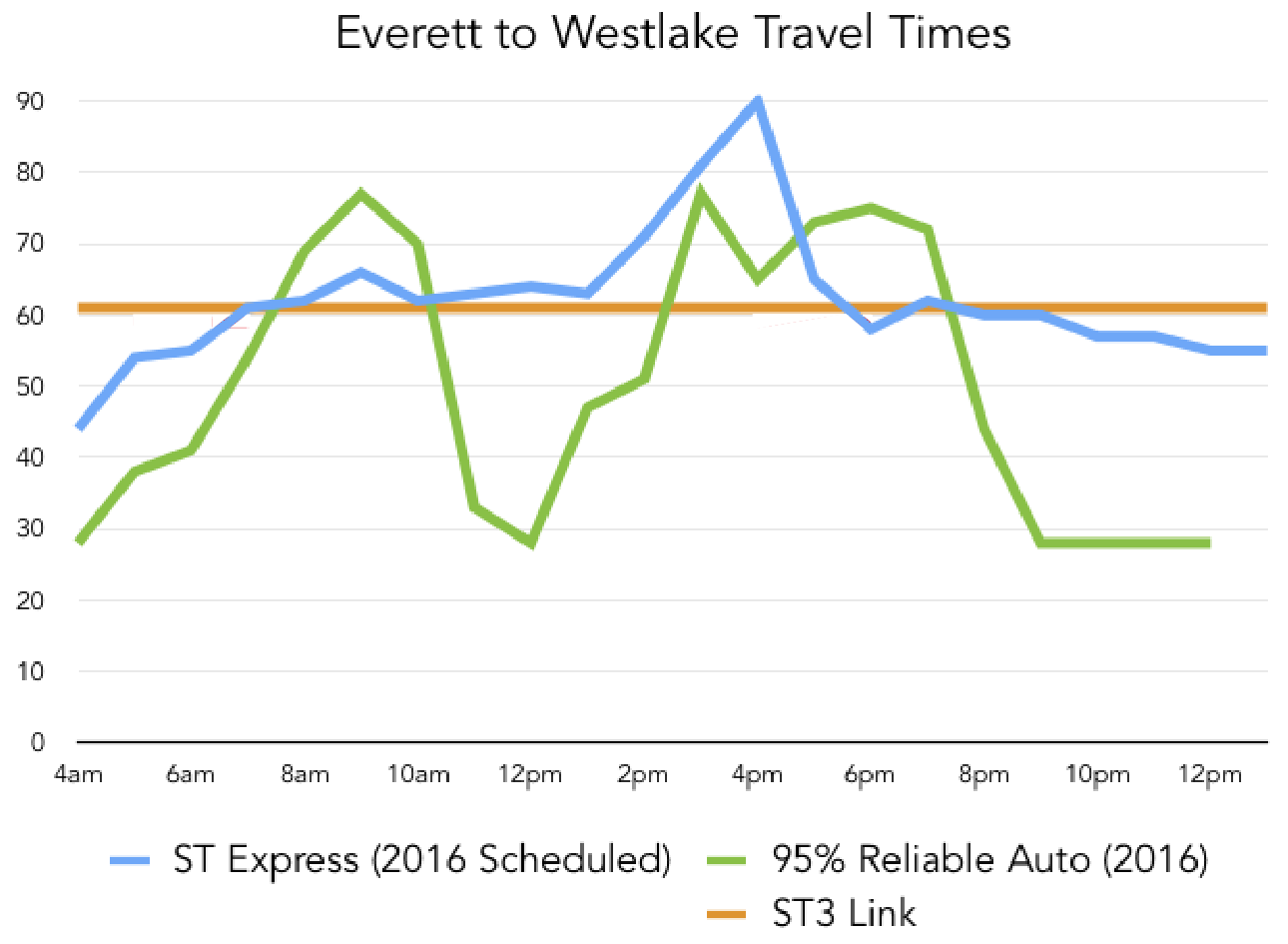 Transit travel times from Everett to Seattle, currently ranging from 55-90 minutes due to congestion, are projected to improve with ST2 down to 68 minutes during peak (assuming bus-rail transfer at Lynnwood), and ST3 buys another 8 minutes, for travel time of exactly an hour. Everett to UW would clock in as a one-seat, 53-minute ride, competitive by any measure.

In this context of plausible political alternatives, a 60-minute train to Everett looks pretty damn good. That’s a full 50% faster than Dallas’ Orange Line and 56% faster than Portland’s Blue Line. It would open up 300 unique destination pairs while being nearly as fast as a Sounder train that only stops thrice. It will do the work of Sound Transit 510, 511, and 512 while offering nearly wholesale replacement of Community Transit’s commuter bus network, providing a huge dividend of additional feeder service already envisioned in Community Transit’s long-range plan update. It will end the Seattle bias that only rewards peak-direction commuters with reliable bus commutes. It will replace hundreds of diesel buses every day, forever, with hydroelectric-powered trains. And that train will never, ever, ever get stuck in traffic. 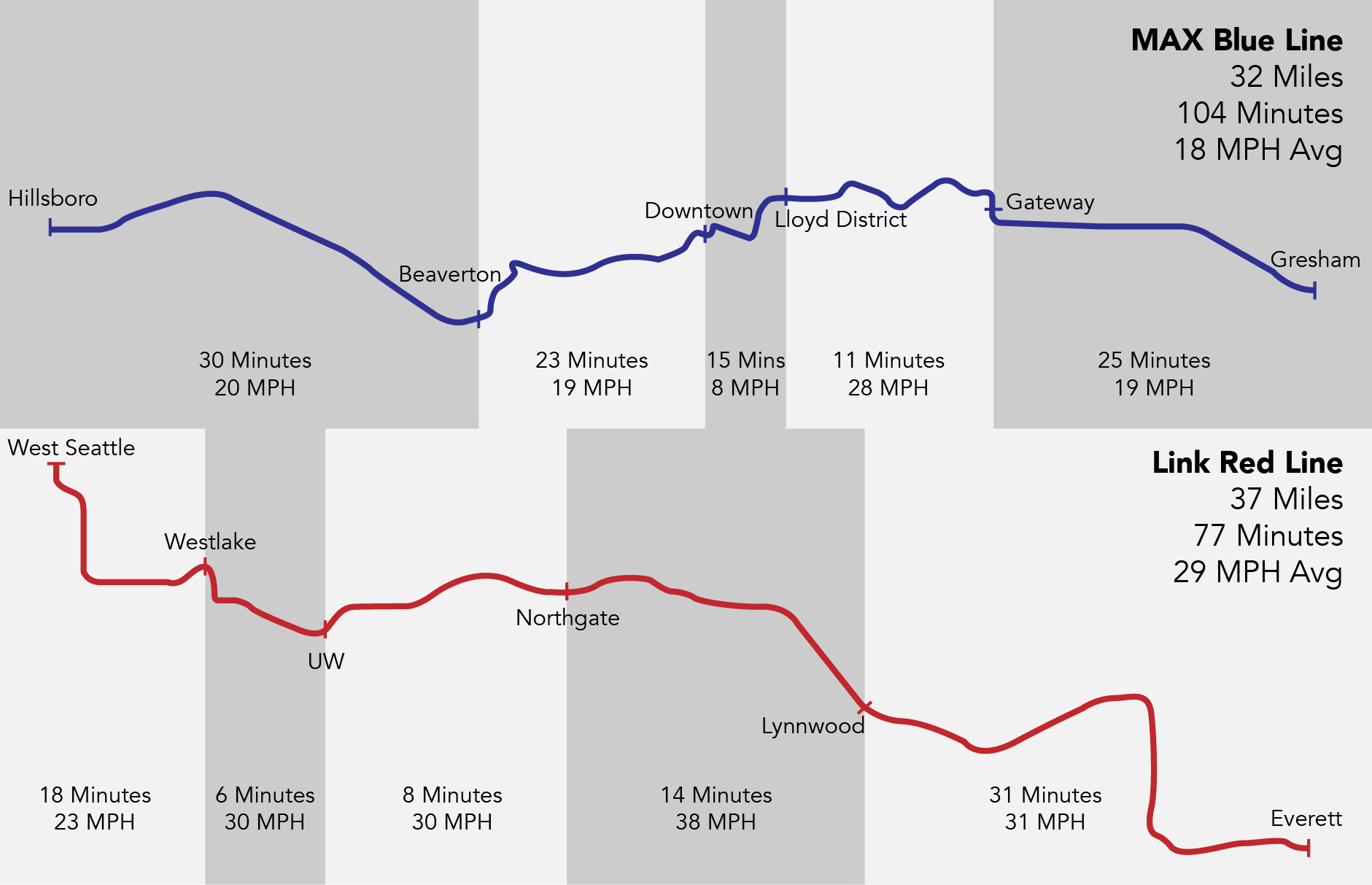 I used to be a strong skeptic of suburban rail, and articles of mine making the negative case have languished in the STB queue for years. But after one too many times stuck on reverse peak I-5, any technocratic wonk instincts in me have succumbed to a pessimistic realism about our ability to manage our highway corridors, and concomitantly led me to believe that Link to Snohomish County will be a smashing success. It’s faster, more frequent, and more reliable than other American precedent. Perceived excesses like Paine Field are an unproven bet – paid with their own money – that could well pay off. And a lot can and will change in 20 years, and only in ways that will make the investment look better than it does today.

The value proposition to me is: what it would take to build equivalent new capacity to offer a reliable 1-hour trip in 2036?  To do so with buses or driverless cars would require either new lanes of I-5, aggressive taking of lanes from motorists, or truly punitive Express Toll Rates of $20 or more.  And if trains through low-slung warehouse districts of Snohomish County give you heartburn, you have the intervening generation before opening day to fight for zoning and land use changes to make it fully worth it. The good thing about brownfield development is that there are far fewer pitchforks to dodge.

But if for nothing else, it’s reasonable to build grade-separated transit to serve one of the largest inter-county flows of workers in the U.S, as fixing the peak travel times alone would likely require equivalent amounts of money if spent on highways. Once we’re talking billions, we may as well build rail.