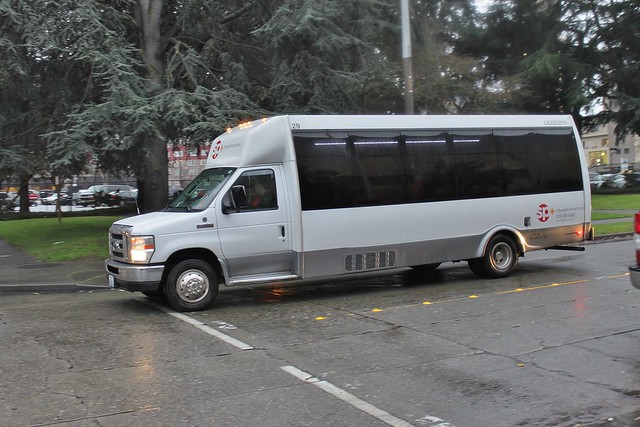 Amazon plans to debut its own pilot commuter service Monday, joining the ranks of major tech companies that offer private shuttles as a perk to employees and a way to counteract the headaches caused by traffic congestion, GeekWire has learned.

“Amazon Ride” will run six times in the morning and six times in the evening at 20 minute intervals from the suburban communities of Bellevue, Issaquah and Redmond to Amazon’s South Lake Union campus and the new Doppler building in the Denny Triangle, according to a website for the service. The service initially will not go to other neighborhoods in the city of Seattle.

As the article notes, tech companies like Microsoft and Facebook already provide regional commuter shuttle service to its employees (full disclosure: I work for Microsoft and have been known to enjoy a ride on the Connector). Amazon has been running an intra-city shuttle (shown above) for some time.

Amazon’s new shuttles will join Facebook, Microsoft, and (soon, one assumes) Expedia in driving through South Lake Union on busy Mercer Street. Unlike Metro buses, the shuttles can make the traffic-snarling shuffle from SR 520 to the Mercer Street exit, providing direct 520 service to SLU. Once they get there, though, they’re stuck in the Mercer Mess with all the SOV traffic.

To make the shuttles more appealing to their employees, the tech giants ought to lobby the city to add an HOV lane on Mercer. There’s never been a vocal constituency for HOV/transit priority on Mercer, because neither Metro nor the City have prioritized it as a transit corridor. (Metro briefly flirted with the idea of a 520-Mercer route during their last Eastside restructure proposal).

Metro will likely come back to the table with a new Eastside proposal in the next year or two. When they do, they ought to present a united front to the city along with the tech companies to demand, at minimum, dedicated, peak-only HOV lanes on Mercer. If one were running a high-profile public-private partnership dedicated to solving Seattle’s transportation problems, this is exactly the kind of thing that might be worth focusing on.