The last campus master plan, completed in 2003, laid out the development of 3.0 million gross square feet, of which all but 211,000 square feet currently remains to be built. The 2018 Plan calls for 6.0 million square feet of net new development which the plan describes as completing “full build-out” of the Seattle campus. 85 potential development sites are identified with a maximum buildable allowance of 12.9 million square feet altogether. The formation and refining of the CMP is especially timely considering the proposed U-District rezone which is directly adjacent to campus and is slated to create up to 5,000 new housing units. Both rezones are critical to accommodating the projected 8,675 additional students UW will enroll by 2028. The CMP may need to get more aggressive with growth with the news that the most recent tweaks to the U-District rezone have scaled back total developable capacity. 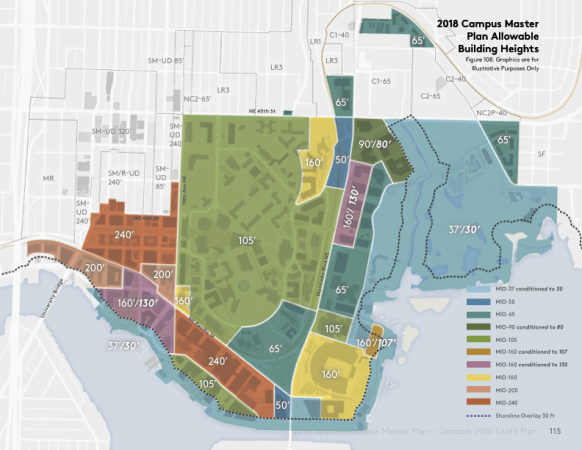 Still there are causes for urbanist concern. One of the core standards guiding all development on campus is to “provide adequate light, air, access, and open space [and] conserve the natural environments and historic resources.” Accordingly, many of the graphics in the CMP illustrate plans for buildings that use up much less space than the maximum buildable envelope through tower spacing rules and required setbacks in order to maintain “pedestrian scale daylight & views.” Encouragingly, though, new developments will aim to have “public-facing ground floor uses” to create active corridors. One of the main reasons given for restricting building heights, especially in East Campus, is to preserve waterfront views from Central Campus.

The plan divides campus into four main sectors: Central, West, East and South Campus. The 2018 CMP envisions intensive development in the three sectors outside Central Campus in order to preserve “historic assets,” existing open space and “campus character” in the core. This presents a mixed bag of opportunities and challenges unique to each sector which are explored below.

East Campus is comprised of the area of campus east of Montlake Boulveard. The CMP concentrates development in the northern half of this area which is currently occupied by massive surface parking lots. The area gets a rezone for building heights up to 130’ in some areas promising greatly increased activity from current levels, but the stroad that is Montlake Boulevard presents an unnatural barrier between the new development and the rest of campus. To mitigate this issue, the CMP calls for a new land bridge, similar to the one leading from Rainier Vista to UW Station, to cross Montlake Boulevard just north of Wahkiakum Road. While this feature will help in combating the inherently anti-urban nature of Montlake Boulevard, the CMP does not address Montlake itself except to say that improvements “should be explored.” While the road is a WSDOT facility, the plan should at least call for working with that agency to humanize the street by accommodating non-SOV modes, however tall of an order that may be in practicality. An easy first-step, which is not mentioned in the CMP, would be to lobby Metro to add bus stops for the 65 and 78 as there are currently no stops between UW Station and University Village. Much of East Campus is within the walkshed of UW Station, but these stops will be necessary to facilitate quick connections to downtown from the northern end of this area as well as West Campus and the University District. 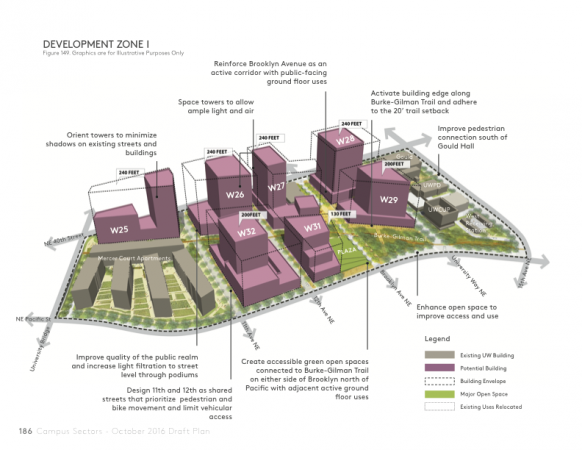 South Campus, defined as the area west of the Montlake Bridge and south of Pacific Street, will be home to some of the tallest buildings and densest development in the future UW. The CMP contains a rezone that will allow for building heights up to 240’ for much of this area and lower heights closer to waterfront. Pacific Street presents another barrier for pedestrians and cyclists, but the CMP at least states that bus improvements “should be explored” here. Perhaps the biggest feature planned for South Campus is the creation of a large new open space which will create “major pedestrian connections between Central and South Campuses, and…a permanent view corridor to the water.” The current and planned amount of open space near this area is already considerable, so the necessity of more parkland in the face of dire need for more housing is debatable. Still, kudos to University for at least focusing the new open spaces near the waterfront where developable capacity is lower and connections to the rest of the campus more difficult.

An exciting new feature in this area is a waterfront trail which would run along Portage Bay and the Ship Canal connecting the new West Campus open space, the new South Campus open space, and the backside of the UW Medical Center. IT would join up with the existing waterfront trail that currently begins at the Montlake Bridge and runs adjacent to the Waterfront Activity Center, Husky Stadium, the planned East Campus Land Bridge and the Union Bay Natural Area among other amenities.

West Campus, which is the area west of 15th Ave NE and south of NE 41st St, will be the absorb most of the university’s growth over the next decade. This area, unlike the other peripheries of the campus, enjoys a human-scale street grid. Most of the area is within close walking distance to the retail and services contained within the University District, frequent bus service on 15th and Campus Parkway, and the future U-District Station. Consistent with the proposed U-District rezone by the City to the north, much of this area will also be rezoned for 240’ height limits dramatically increasing buildable capacity. In addition, Brooklyn Avenue is slated to become an “Active North-South Connector and Green Street” but it is unclear what this envisions beyond the introduction of a bike lane and an “activated pedestrian realm.”

Similar to South Campus, West Campus also gets a “multi-use, public open space that functions as the heart of the West Campus.” The seven acres of open space are necessary in order to provide “needed outdoor relief from the added density throughout the West Campus” as well as “a sense of privacy for the Fishery Sciences.” Fishery Sciences’ need for privacy is unclear, but more perhaps more perplexing is that the CMP declares that a central purpose of creating this open space is to encourage pedestrian activity, but the plan then cites that open space as necessary in providing much needed privacy in the area. One upside to a large new park in this area is that it will take some of the wind out of the sails of those still calling for a large plaza around the future U-District Station instead of transit-oriented development.

Currently, the number of parking stalls available within the MIO is capped at 12,300 which is unchanged since 1984. UW is 1,633 spaces under this cap and no substantial changes are planned for the new CMP. Considering that the large surface lots of East Campus are slated for redevelopment, the UW identified 14 potential new parking locations to replace some of this lost capacity. The campus of the future should strive not to replace lost car storage, but considering the U-PASS program continues to depend heavily on parking revenue, this is a mixed bag until the university steps up and identifies a more sustainable revenue source going forward.

Among other potential parking management improvement strategies, the CMP directs the University to “ to discourage the use of SOV’s,” institute a more dynamic pricing model based on demand, transition away from a parking permit model to a pay-per-use model, adding new wayfinding and real-time parking availability information to improve the efficiency and utilization of existing supply, try to coordinate and integrate with City of Seattle’s e-Park system and work with the City to manage unrestricted on-street parking adjacent to the University, most likely through expanding the Restricted Parking Zone Program.

Notably, the CMP retains minimum parking standards for student housing of “one space per unit for family housing and spaces for up to 4 percent of total residents for single student housing.” Students in university housing near campus are perhaps the segment of the population that can most easily live car-free in the entire region. Also, considering that Northgate Link will come online during the life of this iteration of the CMP,  the plan should strive for elimination of parking minimums to reduce the construction costs of new housing and keep rents more affordable.

The plan recognizes that long stretches of campus boundaries currently provide a poor pedestrian environment including the “continuous, blank building facades along NE Pacific Street near South Campus” and “the retaining wall along 15th Avenue NE.”  15th is re-imainged as more pedestrian oriented with the following improvements:

The CMP notes that Red Square is, not surprisingly, the area of highest intensity pedestrian use on campus which makes the fact that the north and west entrances lack ADA-accessibility a significant current problem. The plan calls for “accessibility and environmental improvements in a few key locations” but there are no further details.

The CMP calls for a comprehensive campus bike network that contains “desirable bicycle facilities” while reducing conflicts with pedestrians. Among specific improvements, the plan notes that sharrows on Stevens Way are inadequate and calls for “consideration of bike improvements” on this road. The plan also envisions re-routing bike traffic off the Burke-Gilman Trail down 11th Avenue along NE Pacific Street and connecting back at the corner of 15th Avenue “to ensure safer Burke-Gilman Trail connections.” Improving the facilities that connect with key inter-neighborhood and regional routes are emphasized as well as improving the capacity of the Burke-Gilman Trail through campus. Investments in “high-security” bicycle parking and providing adequate bike parking supply to serve demand are also considered.

The CMP makes a number of recommendations for improving the transit network in and near campus. The plan recognizes light rail stations as “major destinations for all modes of movement” and accordingly directs that sidewalks leading to and from stations should be designed to meet capacity needs and to visually and aesthetically connect to campus. Also on the list are possible bus lanes and/or signal priority improvements along multiple corridors including Roosevelt/11th Avenue, University Way NE, 15th Avenue NE, NE Pacific Street, NE 45th Street and Montlake Boulevard NE. The University also calls on the various agencies that serve it “to improve early morning service (before 5 AM) and increase off-peak service to provide greater user flexibility.”

The ongoing financial saga of U-PASS is briefly addressed. The CMP recommends the following three strategies for the program:

It is a relief to see the university exploring how not only to make U-PASS more financially sustainable, but also how to expand it to be more useful.The possibility of integrating U-PASS with Pronto is specifically mentioned.

The 2018 CMP final plan and EIS will be published in early 2017. Next, the CMP will go before a hearing examiner and the Seattle City Council in Summer 2017 with final approval from the City Council and UW Board of Regents expected in late 2017 or early 2018. Comments on the CMP should be submitted to Theresa Doherty, Senior Project Director, at tdoherty@uw.edu and Leslie Stark, CMP Outreach Coordinator, at lstark24@uw.edu.

A public hearing on the draft EIS will take place on October 26th from 6:30-9:00pm at the UW Tower Auditorium at 4333 Brooklyn Ave NE. Comments on the EIS can also be submitted to  cmpinfo@uw.edu or jblakesl@uw.edu. November 21st is the deadline for submitting comments for both the CMP and EIS.