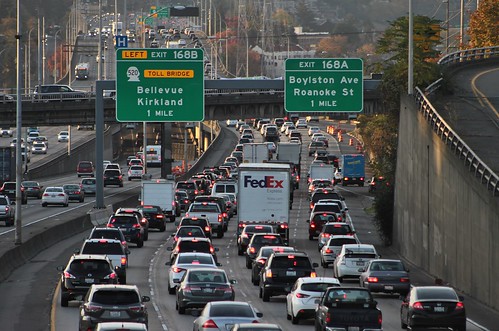 High-capacity grade-separated transit doesn’t make traffic jams go away. It just adds capacity and gets transit riders out of them. Photo by SounderBruce / flickr

On the eve of what is likely the most important election of this decade, expect one last really, really busy evening rush hour on the newly-expanded Link Light Rail system, as the Seahawks host the Buffalo Bills at 5:30 pm Pacific Standard Time. For this game, there are no shuttles and no special Sounder service. Expect more congestion than usual on the buses and jump on the third (rear) car of the train if there happens to be one (and there probably will be as Sound Transit will be running all 3-car trains all day, including the extra trains after the game, and a few 2-car trains during peak to maintain headway, per Bruce Gray at Sound Transit). There will also be extra ST Express 550 and 554 buses after the game to help clear the crowd.

Your ballot should be in the mail today to be postmarked tomorrow. If using the postal service, don’t forget the first-class postage of 47 cents, or 68 cents if returning the heavy Snohomish County ballot.

Once again, here are STB’s endorsements, and everything you need to know about Regional Transit Proposition 1 / Sound Transit 3, at the very end of the ballot, if you are still undecided.

25 Replies to “No Seahawks Shuttles Tonight; Vote by 8 PM Tuesday”