Last year, there was enough public comment against the wide roadway to trigger another round of environmental review. But given that 2 general purpose lanes and 2 ferry queue lanes were seen as the immutable baseline for the project, the city sought to study the only lane reduction it had available, axing the bus lanes. This occurred despite the city’s insistent reassurance that it had no intention of implementing what it was about to study.

A year later, despite significant public comment to narrow the roadway, little has changed in the Final EIS. Giving each interest what they wanted (GP lanes, ferry lanes, bus lanes) always favored a wide roadway, and transit priority seemed to be the only allocation ever really at risk. So where do we go from here? 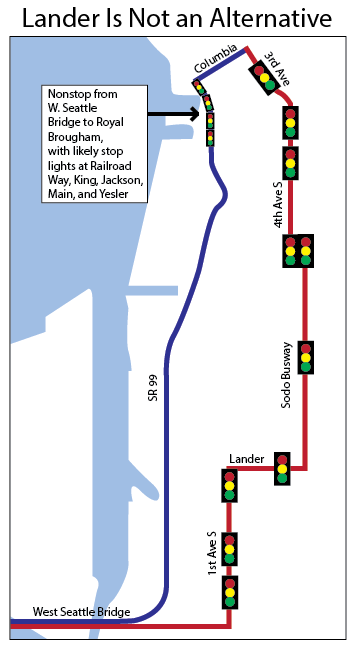 Though I certainly share the frustration over a bloated surface highway, I also believe the fight to reduce general capacity is now lost, and that further attempts at appeal will only endanger transit priority.

But transit priority must remain, even at the cost of a wider roadway, because the near-term alternatives are either politically impossible or objectively inferior. Though the proposed Pioneer Square/Main Street pathway was promising, neighborhood groups flexed sufficient muscle to scare Metro off. And now that the Lander Street Overpass is funded, there has been some rumbling about shifting transit from the waterfront onto 4th Avenue South or the Sodo busway instead. But this would be a grave mistake, with Metro’s 2013 analysis showing an up to 5-10 minute travel time penalty for transit riders, with $2,500 per day in additional operating costs for Metro in perpetuity. Even with the Lander Overpass, a Sodo pathway would add up to 10 signalized intersections if using the Sodo Busway, or up to 13 if purely along 4th Avenue S.

Luckily, there is a deus ex machina in the room in the form of Sound Transit 3. High capacity light rail will create brand new right-of-way to West Seattle by 2030, or possibly sooner if permits are expedited, bonding limits are loosened, or unexpected federal assistance arrives. With the surface highway not proposed for construction until 2020, that means West Seattle could be dependent on waterfront surface transit for less than a decade.

Metro’s Long Range Plan already shows no transit on Alaskan Way in 2040, with Link absorbing nearly all demand from West Seattle to Downtown. Only the Delridge RapidRide (via 4th Ave S) and a new West Seattle-SLU express route (via the Deep Bore Tunnel) would provide additional Downtown service. 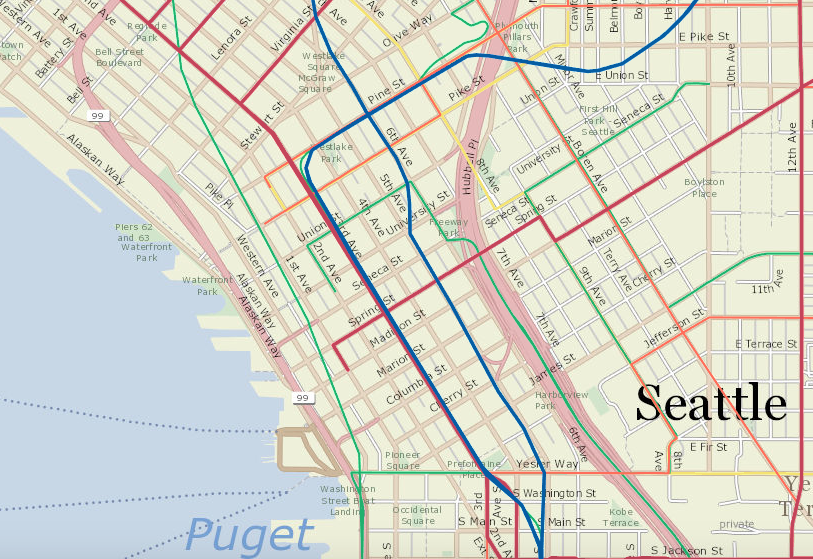 I’d suggest two ways forward: 1) work hard to expedite Link to West Seattle to shorten the window in which the waterfront will be an anti-urban mess, and 2) agitate for explicit commitments from the City of Seattle to narrow the roadway upon Link’s opening. An MOU between Metro, the City of Seattle, and WSDOT should require designs amenable to narrowing and commit all parties to shaving 20-40′ off the width south of Yesler Way. Even though urbanists lost the battle for a narrower street, we can still win the war.

108 Replies to “A Waterfront Stroad is Regrettable, but Losing Transit Priority Would Be Worse”