In an early Christmas gift for beleaguered Queen Anne-SLU-Capitol Hill commuters. Metro and SDOT have announced a slew of improvements for the notoriously unreliable Route 8. The plan would do a number of exciting things: 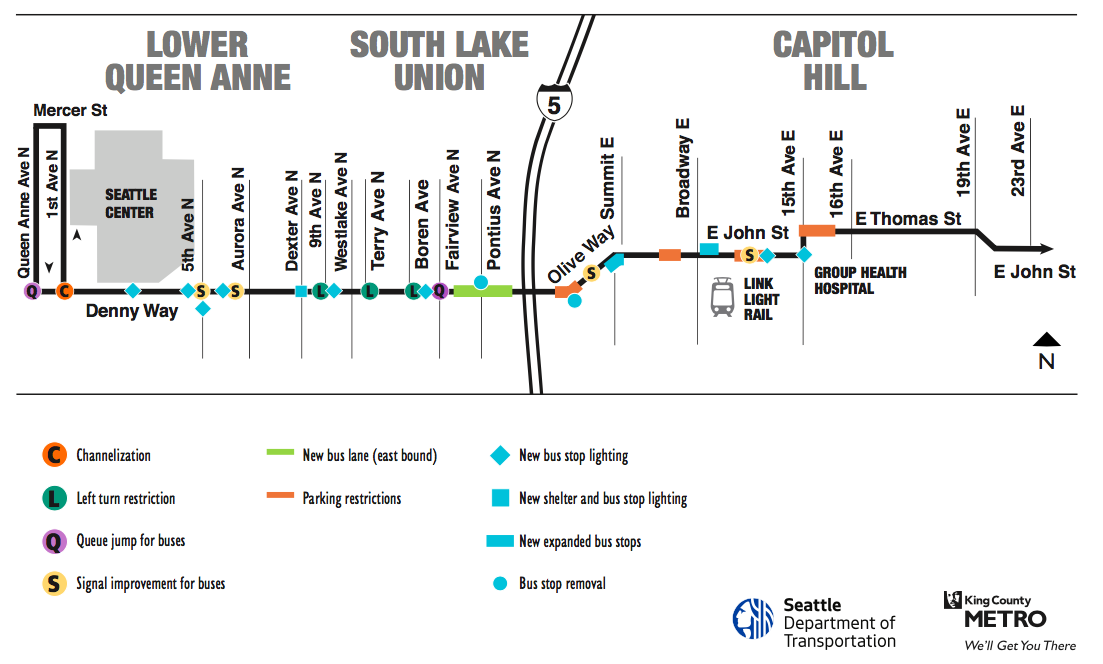 Final design will finish up in early 2017, with the improvements slated to be implemented in phases through early 2018.

Long known as a bottomless pit for service hours, the Denny corridor has had structural problems ever since Arthur Denny and Carson Boren built a 49° grid in the Denny Regrade while Doc Maynard prevailed with a cardinal grid elsewhere else. In the 1960s, an era of concrete foolishness, we built I-5 through the heart of the city, reducing Capitol Hill-SLU pathways by two thirds. In 2011, STB had a post consisting of nothing more than a YouTube video of Route 8 not moving for 12 minutes.

Yet most of Route 8’s struggles are due to the short Yale Street on-ramp to southbound I-5. It is the only southbound ramp between the equally congested Mercer and Spring St ramps, and traffic has nowhere to go but to back up onto Denny, blocking Route 8’s bus stops at Westlake, Fairview, and Stewart. Prior improvements have tinkered around the edges but have avoided anything resembling structural change. Metro broke Route 8 in half in March 2016, and Metro and SDOT have repeatedly invested service hours in schedule padding.

Think about that: your transit tax dollars have not been used for new or better service in the corridor, but to eat the costs of the inefficiencies that solo drivers inflict on it. The end result has been universally unsatisfying: everyone pays more in their money and time, no one gets where they’re going, and the resulting misery exacerbates the problem by creating a perverse incentive to avoid transit.

So three cheers to SDOT and Metro for offering some real hope. This is the kind of thinking we’ve needed all along.

72 Replies to “A Christmas Present for Route 8 Riders: A Denny Bus Lane”