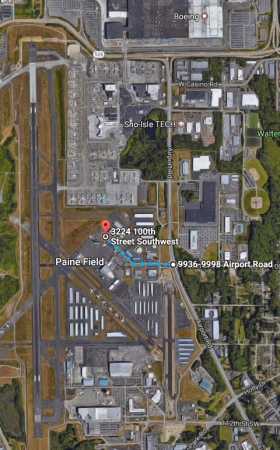 Alaska Airlines shocked everyone yesterday by announcing they would begin commercial service out of Paine Field in fall 2018. There will be 9 daily flights by Boeing 737 and Embraer 175 jets, presumably to major Western cities. But how does this fit into the overall strategy for the area, a strategy that includes Link to Paine Field? And how can flyers get there via transit?

Serious discussions of flights here go back to at least 2008,  and I first wrote about it in 2010.  Local officials see limited growth prospects from Boeing, but a hub of expertise in various technical niches that has grown up around it. They look to that hub for job growth, while outside investors look for places that they can reach without a 2-hour cab ride. Both light rail to Seattle and SeaTac, and an airport no more than two hops away from most major world hubs, fit into that strategy.

On the other hand, like most other communities Paine’s immediate neighbors resist the externalities of additional flights. Mukilteo figures therefore oppose the flights outright. Somewhat more removed officials, like Everett Council and Sound Transit Boardmember Paul Roberts, support commercial service but minimize the volume of flights that might occur someday. But it’s hard to believe that other airlines wouldn’t be interested, especially when Seatac faces capacity limits again.

With a handful of flights next year, high-capacity transit may not be a high priority. However, given the expense of driving to a flight, a decent transit option would be welcome. According to Brett Smith of contractor Propeller Airports, the passenger terminal will be as shown on the map above. This places it 0.4 miles from the intersection of Airport Road and 100th St SW, the nearest point where transit could serve the terminal while being “on the way.”

At the moment, only Everett Transit Route 12, an hourly circulator from Everett Mall, reaches this intersection. As luck would have it, in early 2019 the Swift Green Line will provide 12-minute headways (20-minute weekend/evening) there as well. Swift Green will connect with Swift Blue at SR99, and I-405 express buses at Canyon Park.

Propeller Airports didn’t immediately respond to a question on plans, if any, to improve the pedestrian trip from BRT stop to passenger terminal. Seatac has been investing in improving the walk recently. Certainly, a half-mile walk should not be a huge deterrent to budget-conscious travelers.

Another interesting question is the longer-term prospect for integration with the light rail spine in 2036, a time where flight volumes might be quite larger. When I asked him yesterday, Mr. Roberts “hadn’t given the issue much thought” and was far more concerned with ongoing assaults on Sound Transit in Olympia than tinkering with plans that won’t be finalized for years.

The ST3 plan envisions a station at the Boeing Plant and a provisional one on SR99. Both would in practice require a transfer to Swift to use the terminal. If Paine remains a niche airport, that is enough. If not, and funding allows, it might be wise to (1) add at least a provisional station at 100th and (2) shift the elevated tracks as far as possible to the West to site said station optimally. But that will have to wait for the next stage of the planning process, and depends on fending off the legislature’s attempts to eliminate Sound Transit’s financial flexibility.