Kitsap Transit is about to launch their passenger-only “fast ferry” service between Bremerton and Pier 50 in Seattle on Monday, after a decade-long saga of lawsuits, studies, funding crises, and ballot measures. The Rich Passage 1, built in 2010 in Bellingham, will make six daily round-trips between the two cities on weekdays (during peak periods), and ten daily round-trips on Saturdays (mostly in the afternoons). Kitsap Transit will continue to not offer Sunday service, including onboard the new ferry.

Currently, the state-operated car-and-passenger ferry takes 60 minutes to make the trip across Puget Sound, running roughly every 60 to 90 minutes. The new fast ferry will take just 28 minutes, with 7 minutes for loading and unloading at each terminal before turning around. The stark difference in travel time come in part due to a lightweight composite body, as well as being able to run at upwards of 37 knots (43 mph) and cruise at 29 knots (33.4 mph); the newest state ferry, the MV Chimacum, only has a top speed of 17 knots (20 mph), about the same as the average surface-level light rail system.

The Rich Passage 1 will be able to carry a total of 118 seated passengers, and has room for four mobility devices (that have to be tied down) and 12 bicycles. Up to 88 of those seats can be reserved in advance using Kitsap Transit’s online booking system, while the rest are available for walk-on passengers on a first-come, first-served basis; un-claimed reservations may also be released if not claimed within 10 minutes of boarding. The fares, paid via cash or ORCA, come out to $2 for eastbound (Bremerton to Seattle) trips and $10 for eastbound (Seattle to Bremerton) trips, mimicking the state ferries’s cheap (aka free) fare for eastbound trips. Fares will be free until July 31 in celebration of the new service, so a day trip to Bremerton may be well in the reach for those who haven’t visited before (myself included).

The vessel itself is a bit small and cramped, especially compared to the colossal state ferries. The seats are packed densely, with only room for a single table and a handful of power outlets. At the back of the boat are 12 bicycle racks that are unable to fit bicycles with fenders, disc bakes, or fat tires, much to the ire of cyclists more used to the roomy King County Water Taxi accommodations. As a consolation, the state ferries will still accept bicycles of all kinds, though both they and the new fast ferry ban cleats on board the passenger deck. 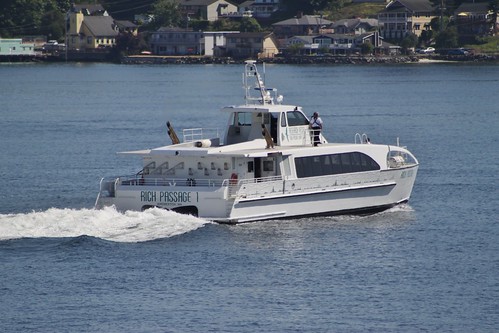 To help spread the fast ferry’s reach across the county, Kitsap Transit also launched two express bus routes timed to ferry arrivals and departures. Route 1 travels to Silverdale Transit Center and North Viking Transit Center in Poulsbo via Highway 3; Route 2 travels through East Bremerton and eastern Silverdale, serving several park-and-rides. The ferry departs from the same series of docks as the Port Orchard and Annapolis foot ferries, below the passenger terminal for the state ferries, accessible via a stairway and elevator from the bus platform.

The launch of a passenger-only ferry service to Bremerton may be triggering some déjà vu for some long time residents. Indeed, the idea is not new at all—the old Mosquito Fleet used to make the run regularly in the late 1800s—but it has had trouble staying afloat. Washington State Ferries (WSF) rolled out a passenger-only ferry service in 1986, buying a used Alaskan tour boat that made the run in 38 minutes and topped out at 25 knots (29 mph). While early runs were fairly empty, the ferry steadily grew to 22,000 monthly riders by May 1989, allowing WSF to build two new passenger ferries to serve Vashon Island. Only a month later, a dispute between the state legislature and governor’s office led to the suspension of service. The boats sat unused for a few months, until they were loaned to San Francisco after the October 1989 Loma Prieta earthquake. A new funding source for the ferries was found and, by late April, the three ferries were plying the waters of Puget Sound once more.

Only months later, however, complaints from residents along Rich Passage, a narrow strait on the south side of Bainbridge Island, convinced the state to slow the boats down to 12 knots (14 mph), bringing the total travel time to 50 minutes, only a hair faster than the car ferry. The Rich Passage homeowners claimed that the wake generated by the high-speed ferries were damaging their beaches and bulkheads, asking the state for a thorough investigation; the area had previously complained of damaging wakes from newer car ferries in the late 1980s, and the WSF obliged by also slowing them down. The WSF study concluded that the damage was minimal, but the existing vessels would be a problem long-term, so the state commissioned a high-tech passenger ferry that would offer an environmentally-friendly answer to the Rich Passage problem. The new ferry, the MV Chinook, launched to great acclaim in 1998, running at a speed of 34 knots (18 mph) or higher with a smaller wake, thanks to a lightweight body and specially-designed water-jet engines.

113 of the Rich Passage homeowners, however, were not pleased and filed a class-action lawsuit the following year. The Chinook was slowed to 12 knots (14 mph) through the Rich Passage after an injunction from the King County Superior Court, which was overturned and lifted by the state supreme court the following year. WSF themselves brought the slower speeds back in October 2001, concluding that the ferries were causing beach erosion and other environmental damage around Rich Passage. The Rich Passage homeowners settled with the WSF in April 2002, accepting $4.5 million in damages and a speed limit of 16 knots (18 mph), giving Bremerton riders a 40-minute passenger ferry trip.

With the lawsuit settled, it seemed that passenger service would be allowed to continue, although at a slower pace. This would, however, not be the happy ending that Bremerton commuters and the state wanted. Only a few years prior, an activist hailing from another ferry town passed Initiative 695, capping car tabs to $30 and jeopardizing some of the ferry system’s budget. Although it was declared invalid by the state supreme court, actions by the state legislature left WSF with a $93 million shortfall. They went to the ballot with Referendum 51, promising terminal upgrades and preserving existing service (including the passenger ferries), but voters rejected it with a resounding, 60 percent no. With 5 percent of its budget cut, the passenger-only run from Bremerton to Seattle was eliminated in September 2003; the Vashon run would continue with emergency funding and later be scooped up by King County as part of their water taxi service. The Chinook and her sister vessel Snohomish would go on to be auctioned on eBay before being picked up by Golden Gate Ferries in San Francisco.

Seeking to restore service, Kitsap Transit stepped in to propose a 0.3 percent local sales tax to fund passenger ferry service in 2003. While voters rejected the sales tax, Kitsap Transit partnered with a private company to launch passenger-only service in 2004 using local and federal grants; even with the transit agency picking up the costs for fuel and docking fees, the service struggled to turn a profit for its operator. Another ballot measure was floated in 2007 and again rejected by voters, leading Kitsap Transit to pull its funding; the private operator suspended service only two months after the election, leaving Bremerton once again without passenger-only ferry service.

Kitsap Transit took over the state’s wake studies in 2005 and, a few years later, commissioned a new “hydrofoil-assisted” catamaran made for high speed, low wake operations. The catamaran, named Rich Passage 1 for the strait, was designed using computer models and other techniques that would “solve the problem with Rich Passage“, allowing for speeds of 37 knots through the strait. The Rich Passage 1 was put into service in 2012 as a pilot, creating a noticeably smaller wake but unable to attract many riders due to the lack of monthly passes. The Rich Passage 1 was sent to Port Townsend for storage, not before running aground and catching fire while waiting on voters to approve a subsidy for passenger-only ferry service.

The fast ferries service is funded by a 0.3 percent sales tax within Kitsap Transit’s district, approved by voters last November. With $50 million in bonds eventually available to fund the system, which will operate with the goal of a 28% farebox recovery rate and without much in the way of federal grants, Kitsap Transit’s plans to expand service to Kingston (a 33-minute ride) and Southworth (a 23-minute ride) by 2018 and 2020, respectively, while also adding additional boats to the Bremerton run, may seem ambitious. The Bremerton ferry is certainly popular enough with commuters and tourists today, carrying 2.1 million foot passengers in 2016, but time will tell if this service finally catches on and is able to stand the test of time.

During a 20-minute cruise aboard Rich Passage 1 on Wednesday, members of the press and representatives from Kitsap Transit and local governments were treated to a smooth, fast ride around the eponymous Rich Passage and within view of the Seattle skyline. Holding conversations, however, was not easy over the roar of the engines, made worse by the open doors on both ends of the boat. In my opinion, the fast ferries should be a nice ride for commuters that want to get to and from Seattle quicker, but occasional visitors are better off using the slower car ferries, with their large, spacious sun decks fit for snapping photos and enjoying the sea breeze—something hard to appreciate from a sealed cabin.