On Wednesday, Sound Transit quietly released a draft of its Annual Report and 2017-2022 Transit Development Plan.  The TDP, which state law requires ST to complete each year, operates at a higher level than the Service Implementation Plans released in the fall.  While the TDP offers less granular detail about the agency’s plans than the SIP, it gives us a glimpse farther into the future.

This year’s plan doesn’t break any major news, but underscores how much work planners at ST and its partner agencies must do as the system expands.  During 2017 alone, ST is working on four separate planning processes, almost totally centered on bus service: 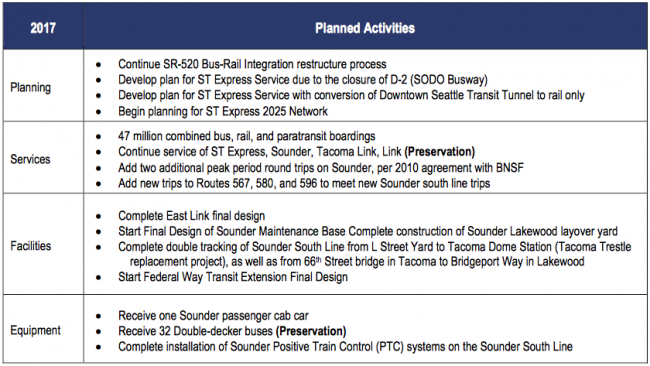 The last of these is a long-term effort that will continue from now until 2022, and will take place in cooperation with similar planning efforts by Metro and Community Transit.  We likely won’t see too much about it in this year’s SIP, but it will be major news as the early 2020s draw closer.

The TDP delivered a couple of other minor news items.  First, ST and BNSF remain on track to complete Positive Train Control hardware installation on the South Sounder line this year, with the technology becoming fully operational next year. PTC is a safety technology designed to prevent trains from entering already-occupied track segments even if an operator fails to observe a red light, and likely could have prevented several of the USA’s worst train accidents.  Second, ST continues to eschew fleet standardization for ST Express, with double-decker buses, commuter motor coaches, and articulated hybrid buses all slated to come on property within the next few years.  Buses that entered service in 2005 or earlier, including ST’s original order of hybrid buses, should be replaced in 2018-2019.