The gap between population and housing growth is an increase in household size. Over this decade, 11.5% more King County residents have squeezed into 8.3% more housing units. That might not seem so large, but it’s about 27,000 missing homes. Those on the margins of the housing market live with parents longer or take on more roommates. Some are homeless. The housing shortage also manifests in rationing via higher rents and rising home prices.

The other safety valve to the housing shortage has been the displacement of King County families to neighboring counties, and particularly to the South Snohomish suburbs. The role of Pierce and Snohomish Counties in the regional housing market goes beyond more housing units. Specifically, they provide much of the new single-family housing growth in the region. Seattle is 21% of the region’s housing stock, but just 2% of added single family housing since 2010 is in Seattle. Distant developments on the edges of the urban growth area have helped to fill a second housing gap, a deficit of housing for families in King County. But in recent years both Pierce and Snohomish are increasingly unable to keep up with demand.

“Single-family” is not the only form of family-friendly housing, but statistically it’s been a fair proxy in this region. While it makes obvious sense for densifying Seattle to shift toward multifamily housing forms, those forms are rarely targeted to families. 81% of new Seattle apartments are studios or one-bedroom. Only a sliver of new homes in Seattle, whatever their form factor, are appropriate for larger family units. Seattle is significantly out of step with comparable cities on this measure. It’s clichéd, but true, to observe ‘there’s not much family in multi-family’.

Elsewhere in King County, single family homes are just less than half of the increase in the housing stock, but the suburbs have grown much more slowly than Seattle with only 5.7% more housing units this decade vs 12.8% more in Seattle. Seattle is surely under-producing homes for families, while other King County cities lag on producing all sorts of homes. 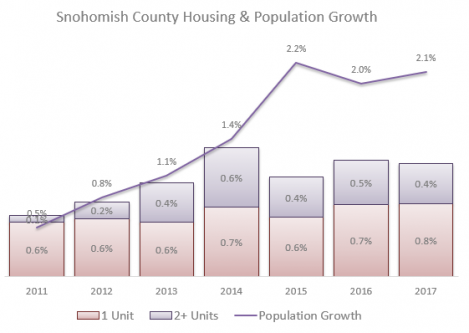 Many suburban cities, and even Seattle neighborhoods, accept growth reluctantly. The Growth Management Act requires capacity for growth, setting numeric goals for zoned capacity for new housing units. The goals are indifferent to the mix of housing types. It is rather too easy for a city to up-zone highway-facing strip malls to urban densities and declare that it has planned for growth. The allowed housing caters to one narrow segment of the market while leaving others underserved.

The Master Builders Association of King and Snohomish Counties is promoting a ten-point action plan to expand housing supply. It offers a detailed agenda for easing bottlenecks in the housing market beyond doubling down on exurban edge development. Along with process fixes to reduce bureaucratic barriers and reforms to buildable lands reporting for more accurate capacity calculations, there are at least two important measures to increase the supply of a greater range of housing.

One measure is that cities be required to up-zone and reform regulations to meet a minimum net urban density of six units per acre in residential zones (net density excludes roads and public spaces). That would allow more housing in low-density neighborhoods where large minimum lot sizes hinder redevelopment.

The more dramatic reform is a minimum single-family residence requirement. Comprehensive plans, the MBA says, should include targets for detached single-family homes. This is a promising idea, though the focus on detached homes is misplaced – there are many possible family home forms that are not detached. With comprehensive plans and zoning updated to require more housing types, cities would be prevented from concentrating growth so exclusively within small areas of high planned density. For built-in cities, a single-family residence target would tend to spread added growth capacity across many neighborhoods where today’s regulation make densification too difficult. 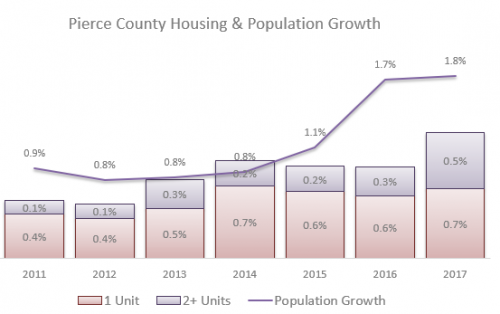 The best answer is a mix of larger apartments, and more townhomes, and more single family detached homes on smaller lots. Long highway commutes are not a sustainable solution to housing deficits near job centers. That doesn’t mean slowing apartment building in urban areas or neighborhood centers. There’s enough demand to go around.

The next round of comprehensive plans will likely see significantly higher regional targets for housing as we play catch-up after failing to anticipate the current boom. The plans should also pay close attention to the full range of housing needs.

80 Replies to “The regional housing gap”