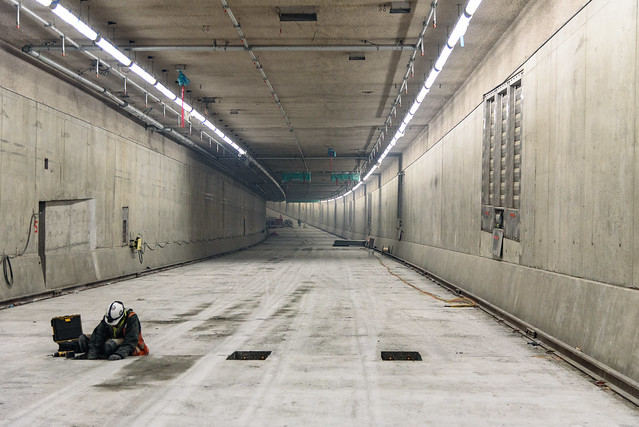 The new SR-99 tunnel has a problem.

The initial results of an investment-grade analysis of tolling options, performed by a consultant for WSDOT, show that setting a price point for the new tunnel continues to be as tricky a proposition as it was for other highways in the region, where new tolls spurred howls of protests from angry drivers and led to worsened traffic on competing routes.

Toll rates must find the sweet spot between two competing ideals. They must be high enough to raise the $200 million pledged to construction costs of the $3.2 billion tunnel and viaduct replacement. But they must be low enough that drivers will pay them, rather than veer off onto Interstate 5 or downtown surface streets, both of which are already at or near capacity.

Congestion pricing – a fee to enter the downtown core – has worked successfully in London, Singapore, and Stockholm.  Drivers are charged via a similar tolling system to the one on the SR 520 bridge.   Congestion pricing allows buses to move faster and, crucially, provides additional revenue for transit service.  Chad Newton wrote a great guest post a couple years back on how it could work.

Some will argue that congestion pricing is regressive.  It’s true that it doesn’t scale with income, but it’s important to keep in mind that most of the poorest people arriving downtown during the workday come by transit.  Parking costs north of $300/month in downtown garages.

82 Replies to “To Avoid SR-99 Diversions, Toll All the Roads”