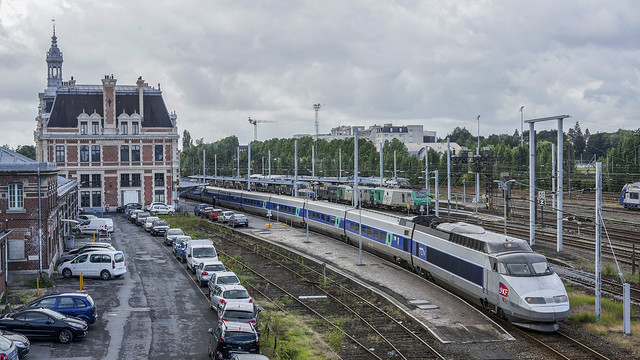 Earlier this year, Seattle Transit Blog covered possible routes for high-speed rail (HSR) to Vancouver. Zach Shaner wrote the first two parts, and I wrote the last two. In December, Washington State DOT (WSDOT) released a study about the possibility of HSR in the Pacific Northwest. The study is bearish on HSR, with high cost estimates and unusually low operating performance—but the numbers themselves are suspect, suggesting a unit conversion error. WSDOT says that the numbers in the study are right—but there is cause for skepticism. If the numbers are wrong, the entire study must be redone, and would point to a more positive conclusion about the prospects of HSR.

When I pointed the unit conversion error, WSDOT rail division communications manager Janet Mankin said, “That conversion appears to be the only error. All of the capital and operating costs and costs recovery numbers were calculated based on cost per mile.” Since then, the table was corrected, and the costs per kilometer are now correct. Unfortunately, it appears what Mankin said was incorrect, and the cost estimates elsewhere used the inflated numbers, overstating the costs of HSR in the Pacific Northwest by a factor of 2.6.

The telltale sign is operating costs. The study believes that HSR in the Pacific Northwest will only be able to recover 62-83% of operating and maintenance costs through fares (table 5-1). This is a red flag: internationally, HSR makes money. The profits of the Japanese Shinkansen operators, and of the long-distance divisions of the French and German national railways, speak for themselves; even Taiwan HSR, which made news for going bankrupt, always had operating profits, and was weighed down by interest rates on construction debt.

The operating and maintenance costs in table 5-1 are a range of $0.65-0.78 per passenger-mile. This contrasts with costs given in table 5-10 of $0.09 per seat-mile, about 12-13% occupancy: WSDOT’s numbers assume the trains will be practically empty. But table 5-5 gives a maximum train load of about 30%; with nearly all ridership coming from the major stations, trains are likely to be at close to their maximum load the entire way. The difference between 12% and 30% occupancy is very close to the 2.6 factor of the unit conversion error.

When I reached out to study consultant Scott Richman, he defended the numbers, saying that the model they come from is separate from the model used in table 5-10. He also said he sent an explanation written by study consultant group AECOM to WSDOT, but as of the time this post goes to press (the evening of January 8th) the study has not been updated with any such information. Without additional information, the evidence suggests that the study used the wrong numbers.

The good news is that fares are likely to cover much more than just the operating and maintenance costs (certainly more than the study’s 62-83% range). This makes HSR a better value proposition; if the numbers in the study are correct, then HSR is too cost-ineffective.

The Problem with the Model

The study uses a coarse model to evaluate ridership, called CONNECT. The model cannot evaluate ridership within each metropolitan area, only between different metro areas. Thus, it cannot distinguish the various alignment options proposed: from its point of view, a downtown station and a station at the edge of the metro region are equivalent. Richman explained that the model actually sandbags downtown stations, by including a special fudge factor boosting ridership at airport stations; this makes the option of serving Vancouver at the airport rather than at Pacific Central Station look better.

The study recognizes its own model’s limitations. It calls for further investigation of alternatives including downtown versus peripheral stations, and options with or without stations in intermediate cities such as Bellingham and Everett. But if the alternatives proposed are the ones progressing to the next level of analysis, then the entire process will be compromised because of the weakness of CONNECT.

How High are Construction Costs?

The study says that the capital cost range is $24-42 billion in 2017 dollars, or about $80-140 million per mile. This is almost certainly too high, for two separate reasons.

The first reason is that the capital costs may have the same unit conversion error as operating costs. Without seeing the AECOM response, it is impossible to tell what went into the capital cost model. If this is what happened, then the correct figure is most likely $9-16 billion, which is much easier for the state to afford (and in line with French TGV construction costs).*

The second reason is that the study says that all alternatives are assumed to include heavy tunneling. The reason given is “to not preclude any technologies at this stage,” including Hyperloop: in other words, this study is using Hyperloop and maglev tunneling requirements to analyze conventional HSR, which can use legacy rail rights-of-way to complete the last few miles into Vancouver, Seattle, and Portland at relatively low cost.

Based on the assumption that heavy tunneling is needed no matter what, the study finds very little difference in capital cost between HSR and maglev. This is not what railroads choosing what to build have found: maglev technology cannot use legacy tracks and must tunnel to reach city centers, driving the high cost of the only intercity line under construction today, the Chuo Shinkansen between Tokyo and Osaka.

It is almost certain that both capital and operating costs for HSR in the Pacific Northwest are affordable, contrary to what the WSDOT study found.

If the operating ratio is only 62-83%, then the best way to maintain good finances is to run as few trains as possible; when operating costs are averaged out with capital costs, the study finds that the optimum is only about 15 roundtrips per day.

But in reality, HSR operating ratios are much more than 100%. With the operating costs reduced to correct the unit conversion error, the operating ratio should be 160-215%, which means that it’s best to run as many trains as can be filled, to help pay off construction costs using operating profits.

With lower operating costs, HSR service could also charge lower fares. The assumption on fares is very high: $0.50 per passenger-mile, as compared with about $0.35 on the Shinkansen and $0.20 on French and German intercity trains. Reducing the fare to European levels would raise ridership, allowing trains to run fuller and more frequently: German intercity trains averaged a 60% load factor in 2016.

If the costs are what the WSDOT study says they are, then the process should stop here: HSR in the Pacific Northwest is too expensive to build and operate. But if the costs are lower, then it could provide much more than the limited options the study suggests. Trains could connect Seattle with Vancouver in 1:10 and with Portland in 1:20, every half hour, charging $30, and making a profit.

*Editors’ Note: CAHSR Phase 1 will cost $123m/mile, but that is in Year of Expenditure (YOE) dollars. When expressed in 2017 dollars, this study assumes a cost considerably higher than California’s.

61 Replies to “How Much Would High Speed Rail Actually Cost?”