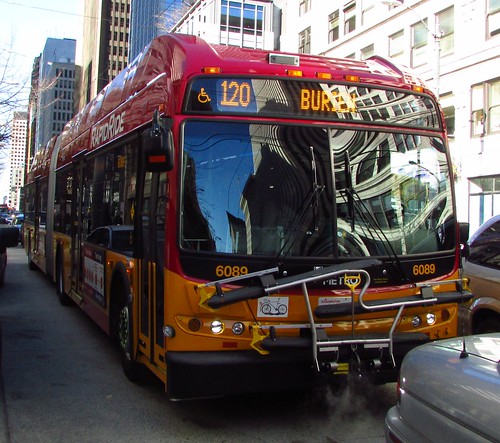 The next RapidRide H, which will replace King County Metro route 120 from downtown Seattle to Burien in 2020, could reduce travel times by almost five minutes between Burien and the West Seattle Bridge, assuming the transit agency and its partner DOTs make the recommended upgrades to the route, which is among the 10 busiest in the county.

Seattle DOT has settled on improvements for the Seattle portion, and Metro is consolidating stops and considering moving the route’s tail two blocks south to SW 150th St, closer to the commercial heart of the city while maintaining access to the transit center.

The City of Burien, for its part, is looking at improvements to Ambaum Way, a wide, auto-centric corridor at the southern end of Route 120.  In an effort to provide non-motorized users with safe access to destinations on Ambaum, the city would introduce business-access-and-transit (BAT) lanes on portions of the street, along with improved traffic signals, wider sidewalks, and a potential re-channelization of the street.   Jack Mayne at the B-Town Blog has a good summary of the presentation city staff and Metro recently gave to the city council:

Currently, Andrews said there are 19,000 vehicle trips on Ambaum and 9,200 bus riders on the Ambaum route; “that’s a huge amount of bus riders, and we expect that to only increase,” said Andrews, adding that when Metro has converted other lines, “they’ve seen anywhere from 12 percent on the low end to as much as 50 percent increase when they converted a traditional line to a bus rapid transit line because the speed reliability is that much better and people are more comfortable using those types of systems.”

“We can’t just discount the bus riders on this route,” she said. “If all those people were in cars, Ambaum wouldn’t function well today.” She said that Metro Route 120 “is among he heavier used routes in Metro’s system.”

While the improvements would be a boon to bus riders and pedestrians, the article notes pushback from Burien residents concerned about increased traffic delays for the project. While re-channelization (or “road diet”) projects are somewhat less controversial in Seattle these days, there may be higher levels of resistance outside the Seattle city line.

The Council will take up the issue on May 21.  If you live or work in Burien or take the 120 or if you occasionally ambulate around the city on two legs,  consider emailing or calling them to give your support.